I almost never use profanity when I write. It is rarely ever necessary to make my point and although it can be used effectively for emphasis, it is at the cost of credibility. I know what the words mean and I am well versed at using them, both grammatically and rhetorically, but again, it is not necessary. Usually. There are, however, exceptions and this particular post represents such a case. I am highly agitated by an anonymous letter some punk sent me today. Before I continue, please take a moment to peruse the following scanned image of the letter and the envelope so that we are all on the same page. 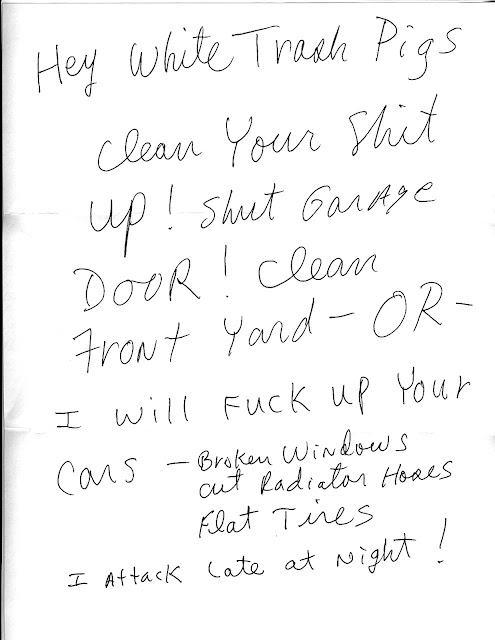 Regardless of whether or not the so-called mess actually exists (it does not) is beside the point. Being called a “white trash pig” does not bother me in the least – I have been called worse. The demands, relevant or not, are not the issue either. There are many ways of communicating one’s desires – this is not the most effective, but small minds have limited capacity for realizing their desires anyway. No, everything up to the capitalized “or” is fine with me - it is what occurs afterward that has my pissed-off meter off the scale.

“Fuck up my cars?” Really? Including (but I would assume not limited to) broken windows, cut radiator hoses and flat tires? That sounds like a threat, and just to be clear, this little justification-for-abortion declares that he (probably, or she) attacks late at night. It is clear just from the addressee on the envelope that this evolutionary anomaly does not know my name, or really much about me, for if this box of rocks did know me, said box would likely take into consideration how important the sanctity and security of my home is to me. The idea that someone might come onto my property with the intention of causing me harm removes all restrictions and inhibitions on how and to what extent I will defend myself.

“Pit-Fighter,” if you have the capacity to even turn on a computer, let alone navigate to this page, take a very broad view of that last sentence.You might attack late at might, but consider who might also be up that late. I warned this post would contain profanity and so far it has only been quotes from my new adversary, so let me fulfill that promise with words of my own:

I’m not fucking around fuck-head. You want to play? Bring it – we’ll see who fucks up what.
Posted by Michael K. Althouse at 7:28 PM 4 comments: