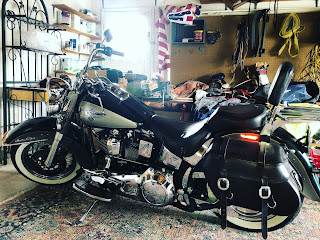 I bought this motorcycle out of desperation, sort of. My motorcycle got hit and although the damage to it was primarily cosmetic, by midway through last October I knew it was going to be down for a while – months, not weeks. It turned out to be longer than even my worst nightmare due to an all too real nightmare, but that story is over, it has already been told. This bike is one that I have long admired, long thought, “that’s my kind of style,” but when it came time to plunge into a particular line of Harley Davidsons, it would not be the Softails that I ended up falling in love with. Stylistically, yes, the Softails are sexy, but from a purely mechanical, functional point of view, the touring line of bikes became my future steeds. 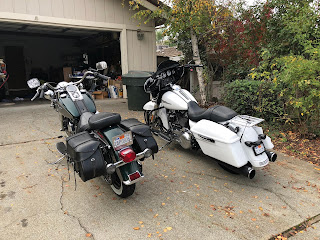 So, why this 21-year-old Heritage Softail Special, AKA, “Nostalgia?” Serendipity certainly played a role. I know the prior three owners of this bike – its legacy is well documented. It came up for sale right at the same time my bike was down for an extended count. It belonged to a friend who was fighting cancer with everything he had and he didn’t need a bike in his garage he wouldn’t be riding anytime soon. And it was that bike. It was the one whose looks and stance had me right from the beginning. Add that the bike was a limited production model, had only 26,000-plus miles on the odometer and was, for a 21-year-old bike, in very good condition, it was as though the planets were aligned just so. It was, dare I say,  preordained?

I put about 1,500 miles on her, but now that my 2017 Street Glide Special is back on the road, the choice about which bike to ride at any given time is clear - and it’s not this old classic to-be. I told Jack when I bought her that I planned to keep her, and I did mean it. But things change and sometimes those starry-eyed promises cannot so easily be kept. If I had more financial freedom (more money) and if I had more space and if I had more time, she would certainly remain part of my stable. Such is not the case and although I have not yet formally listed her for sale, it is known within our circle of circles of friends that I am looking for a buyer.

In the meantime, Jack was battling his last battle. Sadly, his battle is over and he can rest peacefully now. I don’t really know how such things work, but if there is any kind of ethereal essence that can be aware of anything, Jack would be happy to know that the bike is staying in the family, as it were. I will not have to offer her up for public sale. A former owner and friend to us both will be reuniting with what is becoming “our” bike. The price has not changed, it has and will remained profit neutral – nobody is “coming up.” And Jack, in a very real way, will live on through this bike. 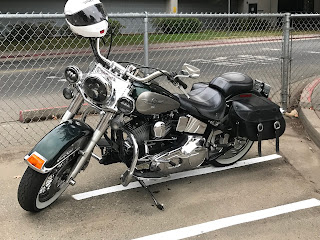 I’m really going to miss Jack. He was an early and prominent presence in my recovery. He was opinionated, obstinate, sometimes abrasive, but he was also one of the kindest and big-hearted men I know. He and that old bike had a lot in common. He touched a lot of lives and, hopefully, he knew that he made a difference. I'm sure he must've. He left an indelible mark on my life and thanks to an odd chain of events, that mark is now associated with the unmistakable lope of an 80 cubic-inch, 1996 Harley Davidson Evolution motor.
Rest in peace, Jack.

Posted by Michael K. Althouse at 11:56 AM No comments:

A little more than 13 years ago, I was rebuilding my life, again. It was not the first time I found myself in the throes of a crisis aftermath, but it turned out to be one with a key difference. This time, I addressed the root of all of my problems. That root was, of course, me. Not all of me, but a key characteristic of what drove me. I had a void in my life that would not be filled with the things that satisfy most people. Success didn’t elude me, but every time I started down that path, I’d find some way to chase it away. The core symptom of it was manifested through an insatiable appetite to alter my consciousness through chemistry. Getting “high” was no longer a passing phase of adolescence, it was no longer “recreational,” it was a full-time job. Indeed, the party was over long before the partying was. I just didn’t know it.

It took me a long time to discover that drugs were the problem. Once there, it took less time to understand that drugs were only a symptom of an underlying condition known as addiction. People view those who cannot “control” their drug use (and in most cases - historically, for sure, but also due to its social acceptance, today as well - the most common drug is alcohol) in different ways. Addiction and its special case, alcoholism, is now considered a disease and while there are those who still view it as a moral failing, an inability to control oneself, the idea that I do not have the power to stop once I start is a good starting place to address this characteristic that has caused me so much trouble. And it comforts me that I am not only not alone, but also that there are means available to treat this disease. That holds true whether or not others believe it to be a disease. It doesn’t matter.

There is a lot of science behind what different substances do to the brain and the nervous system, but that science is not as important as the reality of what my story tells. That story, to those like me, holds numerous familiar themes. The common denominator is an inability to deal with life without resorting to self-medication. As I mentioned, there are a number of treatments, or therapies, that have proven successful, but for anything to work I first had to accept that what I was dealing with was not drug use, but that underlying condition that compelled me to use drugs, often against my own will and counter to my best interests. Getting to that place almost killed me. I am not here to recommend any particular path, and I am not here to say that the way that worked for me is the best way for everyone. I am here to say that if I didn’t do something, I would not be experiencing the success I am today. 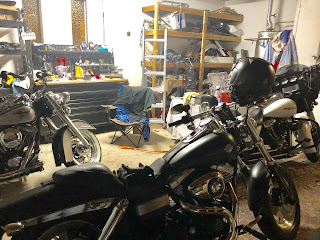 I shot this picture just a little while ago. I was in my garage brainstorming what the next steps would be in putting the motorcycle in the middle (the white one) back together. It’s a long story as to why any reassembly of a 2017 Harley Davidson is even necessary, but suffice it to say that the experience has taught me much about how far I’ve come. The fact that not only it, but also my 1996 Harley as well as a 2009 Harley, my youngest son’s, are all parked in my garage just on the other side of the wall from my office, are all things that I came to gradually, things that I can sometimes take for granted. But other times, like just a few minutes ago, it strikes me: My Harleys, my garage, my son riding alongside me, my office… my house. All of these things and so much more - being present for my boys and family, being a productive member of society, not being a sheep - I managed to put together in a relatively short period of time and, truth be told, all are things that I have desired, consciously and not, for a very long time. While it is true that brief periods of success have seen me with some of this stuff, it was always fleeting. This time it’s different.

But the stuff is more than just stuff - it’s more than just my stuff. It is representative of what I am capable of when I stopped chasing that which drove me to have nothing. What came along with that stuff was responsibility, integrity, deep, meaningful relationships, a career that I never dreamed possible, and respect. The really cool part about it is that I am still me. I am still a “non-conformists.” I still take chances. I still travel the path least followed. I am an explorer, a traveler and a seeker, but I do it without the need to alter my consciousness through any artificial means. I took this picture because I was experiencing an “ah-ha” moment, a wave of pure gratitude and the ability to recognize it as such is special. Really special.

I try not to put too much importance on material things - they come and they go. Success is not determined by the stuff I acquire, it is much deeper than that. But there are times when I think of the things I’ve wanted in life, the things I’d do “anything” for and found that I could not do anything to achieve them. When the focus became internal, when the things I strove for were not immediate or tangible, the rest fell into place. I even have an 18-month romantic relationship with a beautiful woman, and we have had exactly zero fights - none, not even a disagreement or cross words. I have always believed that I, like most people, can achieve virtually anything I put my mind to. When I couldn’t, it was always because of someone or something else. As it turns out, it was, but that someone was me and that something else was part of who I am. And it was true, I could achieve virtually anything I put my mind to, but now I have a mind that is clean and clear. It seems to make a big difference.
Posted by Michael K. Althouse at 11:08 PM No comments: