The Dark and the Light

When I deactivated my Facebook account in February, I did so because the dark side of Facebook was overpowering the light. In fact, the negatives had been outweighing the positives for some time. That is not to say there are no positives, if there was nothing good about it I would not have reconfigured and reactivated my profile after a six-week hiatus. The changes I made are part voluntary and part how I have my security (and other) settings set, and part removing the mobile app from my iPhone. That last part is probably the best part - I no longer take Facebook with me everywhere I go. It no long lives in my pocket.

Among the things I do like about the Facebook is the "On This Day" feature. Since my Facebook history reaches back to 2006, it gives me a pretty good idea of where I was, what I was doing and, probably most importantly, how I was doing over a long and particularly important part of my life. Not always, and certainly not everyday, but sometimes these are pretty significant insights. Today’s is particularly profound. Two years ago today, after a crazy and difficult two years prior, I felt like I was at the end of my rope. I was struggling with not only whether I would be able to finish what I had started at LSU, but in broader terms, what I would do next. I was, in a word, scared. 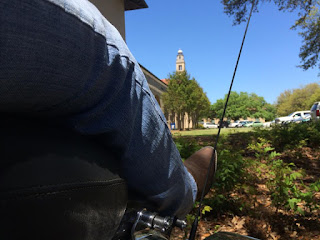 That post two years ago is now private, but I did not delete it like I do with some posts and comments that are no longer relevant. It is still there because as the years come and go, on this day I will be able to not only see just how "bad" things can get and still be survivable (though, my actual survival was never really in question), but also see how things look from one side can look completely different from the other. That post two years ago received an outpouring of love and support in more than 100 comments and it also generated calls and texts of concern and support. After I wrote and posted it, I took my Harley out for a ride, put some Grateful Dead on the stereo and got lost in the Louisiana bayou back-roads. By the time I returned and read all those comments, my outlook was better.

What I resolved that day - and many since - was that I am indeed capable of finishing the work needed to earn a PhD. Further, I resolved to do that work. Since then, I did cross some serious hurdles in that effort, however, I have not, and now I know I will not, write the dissertation needed to complete the degree. It is not that I am not capable or that I think I am not "PhD material" as I lamented in that post two years ago. I know I can do it, but I also know I will not. It is not beyond my capability; it is beyond my willingness. It took a lot, and I mean a lot of soul-searching and introspection to come to that realization. I am not only okay with my decision, I feel freer than I have in a very long time.

So, were my four years in Baton Rouge a waste? Not even close. I would do it again without hesitation. Not only was the experience at LSU one I could never have dreamed of or replicate, I also made some new friends who will be the lifetime variety. I got to spend some time with family in Louisiana that I otherwise would not have. Further, my connection there is such that it has attained the status of “home.” It was for four years and now it always will be, despite the fact that I will never get “used to the weather.” It also wasn’t a waste in terms of academic achievement - I did complete more than enough to receive a second Master of Arts degree. Finally, all that time in Louisiana shows up in Facebook’s “On This Day” feature almost everyday. Do I need Facebook to make those memories real? Of course not, but it sure is nice them along side the struggles I overcame. There is no question that the two are distinctly connected.
Posted by Michael K. Althouse at 11:56 AM No comments: