In the fall of 2003, I returned to school for the first time in many, many years. My previous attempts at higher education were mixed, but in total, unsuccessful. I had less than two years of college credits accumulated, and they were scattered across several areas - too many were redundant or otherwise did not count toward anything. It was rebuilding my life and nearing my 41st birthday. I was also, for the first time "clean and sober," a story for another time, but a key part of that rebuilding process.

My goal was not to complete a bachelor's degree, I was only shooting for an AA degree so that I could start a new career in substance abuse counseling. But really, it was a much shorter-term goal that drove me initially - I was in it for the money. The student loans and grants that I would receive would put the kind of money in my pocket that I had not had since my life came crashing down about three years earlier. However, some time during that first semester, my motivation changed. It changed because I was getting the kind of grades I was never able to earn consistently before. I was good at something good.

The coincidence was not lost on me. My ability to apply myself and do the work necessary, consistently, without the distraction of not only substance abuse, but also the lifestyle that goes with, enabled me to realize the potential I always knew I had. But I never could do it. I knew I could, but I couldn't, no matter how good my intentions, no matter how much I willed it, it didn't matter - the bottom always fell out. Of everything, eventually. That fall in 2003 I had four As and a B - the best GPA in a semester I ever had up until that point. I relapsed during the winter break and went to school that next spring with all those distractions and, while I managed to power through, my grades suffered considerably. I was also arrested again and by the time the fall 2004 semester came, I was in jail for a few weeks. That relapse also ended any hope of becoming a substance abuse counselor.

But I was, by necessity of circumstance, clean and sober once again. And the fire of that first successful semester was still smoldering. When I got out some time in September of 2004, I could not go to school right away, and even when I could go back, I did not know what future I had there. However, after talking to a counselor at American River College, we discovered that I was only one semester away from transferring to my local university. One semester of general education courses would earn me a spot as a junior at California State University, Sacramento. My choice of major was hugely influenced by my new appreciation for my old ability to weave words and punctuation, so journalism seemed a natural choice. The dual major of “government-journalism” manifested itself after I got there. My final semester at ARC was even more successful. Still clean and sober (since going to jail on August 6th, 2004 – to this day, no drinks, no drugs), I achieved straight As, and it would not be my last perfect semester. 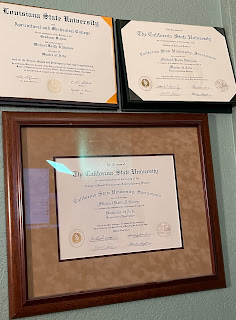 I finished my BA at CSUS in the fall of 2007 and took a semester off writing for a local newspaper before entering the MA program in communication studies there in the fall of 2008. I was awarded my MA in 2012, but in the fall of 2011, I moved to Baton Rouge where I would begin my study in the PhD program at Louisiana State University, also in communication studies. Every semester with the exception on fall 2003 (I was in jail) and spring 2008 (in between my BA and beginning my MA program), I have been a full-time student and taking a full load of classes to fulfill the various requirements to achieve whatever degree I was pursuing at the time. From the fall of 2008 until I left Baton Rouge and LSU at the conclusion of the spring 2015 semester, I was also teaching two undergraduate classes per semester. That is a lot of school for a 40-something turned 50-something “non-traditional” student.

It is the longest run of sustained success I have ever built – the bottom still has not fallen out. And that common denominator – clean and sober – is still common. However, that fire did eventually burn out. For a lot of reasons, all of them important in their own right, I only advanced to PhD candidacy – I never wrote a dissertation and never won the big prize, I never earned the right to place “Dr.” in front of my name. I did earn another MA at LSU, however, and those two master’s degrees, along with the PhD coursework I did complete has secured me a place as a lecturer (adjunct professor, part-time faculty, non-tenured faculty… we have many names) at my first alma mater, CSUS, where I continue to work today.

But it was this day, seven years ago, that I sat in my last classroom as a student. I would still be another year at LSU as a student, but my coursework was complete. I had my comprehensive exams to take and that little dissertation thing to write – and, of course, I was still teaching. But today, seven years ago, was the last time I sat in a classroom on the front side of the podium. I don’t remember what class it was or who the professor was, and although I know it made enough of an impact on me at the time to make note of it, I don’t know that I could have really appreciated the magnitude at the time. Not just that – all of it. All that has happened in all those years – and there is so much more than just this.

And that common denominator… seems to be something there.