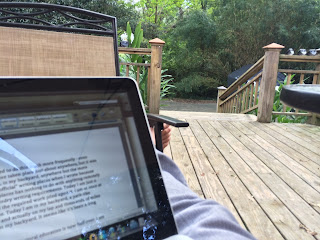 It seems like it’s been a long time. I used to do this much more frequently - even regularly - way back when. It could have taken place just about anywhere, but it was always best at a coffee shop, at a park, in my backyard, anywhere but the more “official” writing places at the more “official” writing times when I wrote because that is my job. This writing, in these places, has nothing to do with anything remotely resembling any of my various and sundry writing requirements. Today I am just a short distance from my desk with all my required work piled upon it. I am at once at home, but also a long way from home. Right now I am in my backyard, a park-like setting in its own right, laptop open and actually on my lap, and thousands of miles away from the place I last wrote from my backyard. It seems like it’s been a long time. Such a long time.

The first semester of the third year of my doctoral education is now half over. I am not sure how that happened, but when placed in context with the entirety of my Ph.D. work here at LSU, it is just another piece of an excruciatingly long two-plus years. So much has happened. So much has gone wrong. So much has gone right. I wouldn’t know where to begin or how to finish the saga of what this period of my life has seen. At 50 years old, shouldn’t I be looking forward to the twilight of a long and illustrious career, enjoying the fruits of my extended labors? Instead, I am once again just beginning anew. It is not the first time. The number of sacrifices I have made, the things and people I have given up and/or been forced to leave behind is staggering. To say this is the path less traveled is putting it mildly. But this time, these past two years, has made all those past sacrifices seem so far away. It seems like it’s been such a very, very long time.

Almost 13 years ago, on October 17th, 2000, my life came to an abrupt halt. It very nearly came to an end. Five weeks had passed before I regained anything better than occasional semi-consciousness, and even then it took several more days to fully comprehend where I was and how I got there. The following two months of took me through four holidays and my 38th birthday – about three months in total – in a hospital bed. I was a mess. My injuries nearly killed… and there were times that I wished they had. Combined with rehabilitation, short hospital stays for follow-up operations and learning to walk again, it was more than a year before I could even think about doing much of anything. That two-year span also seemed like a very, very long time.

The difference this time has to do with the nature of the injuries. While not physically incapacitated, the emotional damage is just as real. It could be said that the injuries are in my heart or to my soul, but they are articulated in my head. As an “academic,” as a writer, as a researcher, as a teacher, it is my head that now does the vocational production that my body used to do. This two-year rollercoaster has seen very, very high highs and exceeding low lows. Each peak and valley is counterproductive to what I must do keep my career alive. And “cutting my losses,” as it were, is kind of like going in for another surgery – the recovery from that can be extended as well. All of it adds up to a very, very long time.

There are moments, however, when events dictate a certain response and that response, while not what I necessarily want, is like that awful medicine we used to have to take when we were kids. It tastes like shit, we don’t want to take it, but it will make us better. Sooner or later. But it often takes time to get to that point. Sometimes it takes a long time. And it has indeed been a long time. And now, finally, it is time to go.