COVID-19 - Day 30 SSRSHTF (since shit really started hitting the fan):
Life went from pending uncertainty at the beginning of March to near worse-case certainty now, on the last day of the month. While the known cases and fatalities continue to rise rapidly, far more people are taking the crisis seriously and doing what is recommended, at least when convenient. There are still some overreacting and too many under-reacting, but we are a nation of extremes, it seems.
Personally, aside from moving from an actual classroom to a "virtual" one, my life is not overly complicated by this. Complying with the directives issued by the authorities as advised by the experts has not been very difficult. My gas tank in my car has been close to full for about two weeks. My supply of necessities has been adequate without over-stocking on anything, despite the temporary shortages caused by those who did and the things that are not necessities are well stocked as well.
I have not gained any weight nor am I eating my boredom away, probably because solitude doesn't bore me. The only thing that has changed noticeably is that, now that I can sleep later because I do not have to commute to work, I do - and that means I stay up later. And later. And later. I am falling back into my natural nocturnal pattern and, although I don't necessarily see that as a problem, if I let it get out of control, reeling it back in could be a bit of a chore. Been there, done that, got the t-shirt. 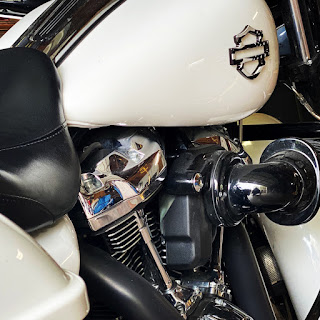 It is Spring Break this week. Ordinarily, I'd be off doing something. I planned to be off riding my Harley all week with no destination, itinerary or plan. While a solo motorcycle ride like that is, by definition, a socially isolating affair, it is not totally completely so. Unless I planned to camp (which, unless absolutely unavoidable, I don't - ever), I cannot guarantee I will remain distanced enough from people who I have no idea where they have been or who they have been in contact with. I'm less worried about getting the disease than I am about spreading it, but either way, I am responsible for keeping my distance, too.

Today I have some loose ends to tie up for my students and I am getting some things in place for when class resumes next week. The weather this week is going to be gradually warming, but even today, with the temperature hitting in the upper 60s, with clear skies, it is perfect for a ride. And I will ride sometime this week for sure. I can go at least 150 miles without stopping for gas, food, a bathroom or anything – I can be 100% isolated on the road for 150 miles that begins and ends right here. But not today, In addition to a little bit of work, I also will do a little bit of work on my motorcycle. It’s also a damned fine day to do that. No reason to “pass the time” with TV, Facebook, sleep, or food. Boredom isn’t real, it is a state of mind – it is a choice. Life goes on, it’s just another day and another adventure.