It feels somewhat appropriate that I am writing these words at one of my old stomping grounds, at the nearest coffee shop to the house I purchased more than nine years ago… so close to what used to be home. That house is now rented to someone I have never met, it is now home to a complete stranger, but this place still familiar, even nostalgic. I’ve written here many times before; undergraduate term papers, much longer term papers as a graduate student and several of the reflections that this blog serves as a repository for. Finding myself right here, right now with a few spare moments to reflect is yet another instance of unplanned perfection.

With just a little more than a day left in 2014, I am compelled to look back at not only the last calendar year, but also the last few years. While distinct lines of demarcation are not common in one’s life story, in many ways a new chapter in my journey began a little more than three years ago. I could never have predicted all that would happen, nor am I able to know what might come next. Indeed, this particular chapter was not even on the radar just a few short years ago. As little a six months ago, I did not know where I would be in a year, but now I do. I will be coming home.

But for any of this make any sense, a very abbreviated recap of the past several years is probably in order. About 17 years ago I hit a figurative brick wall. I moved from Silicon Valley in the San Francisco Bay Area to Truckee, California. I moved to where I always wanted to live, away from the hustle and bustle, away from all those people to what was still a sleepy little tourist town nestled near Donner Summit in the Sierras, not too far from majestic Lake Tahoe. I thought I had arrived; I was living in a four-season paradise. But it would not last. A near fatal accident in October 2000 changed everything.

After a long recovery and rehabilitation, I ended up in Sacramento, went back to school in 2003 and in a very literal sense I started over at the age of 40. I had no idea where the path would take me, but at least I was finally doing something again. I transferred to California State University, Sacramento in 2005 and graduated with honors in 2007. It was academic success the likes of which I never experienced before. After trying to make ends meet as a journalist in what was a crumbling economy, I went back to CSUS to start work on an MA in communications studies. I figured that I could use that degree to get a job teaching at the community college level and secure some stabile, long-term employment.

How I made it through school with all that external shit going one is still beyond me, but I did. Now, with just one semester and only a prospectus and a dissertation left, my time at LSU is coming to an end. This chapter is coming to a close. It is time to move on again. While I could go virtually anywhere, it is the draw of my children and grandchildren (mostly), other family and some very close friends that is calling me back to Sacramento. And it is pulling me away from the friends I made in Baton Rouge. I used to joke around that I needed a clone of me to handle all I had to handle, but it is no joke anymore.

But that word – home – has taken on a new, perhaps deeper, meaning. The old cliché, “home is where the heart is,” doesn’t quite do the term justice, but the idea that home is a physical or geographic location is no longer prominent. True, I have a specific or primary place that I operate out of (currently Baton Rouge), but I now have strong ties to many different locales, and now one of them is outside of California, my “home” state. Coming back home to Sacramento means leaving home in Baton Rouge, and I find that idea unacceptable. Somehow, home has to be more than just where I reside.

As I reflect back on where these last several years have taken me, and as hard as it has been, I can only come away with a feeling of gratitude. I did not feel that way at the end of last year. Last year was not a “good” year, but in retrospect it was for reasons I could not see then. I cannot say what the coming year will bring or where it will take me, but at 52 years-old, my life has a newness, or maybe a freshness, that makes me feel at once much younger and much older than I am. And maybe that isn’t such a bad place to be. I have never been one to take the easy path, or the well-traveled path, or the “conventional” path and often enough it has made life harder than it had to be, but at the same time it is never dull. Moreover, it is the life I have and in the big picture, it is worth every second of it.

Today I “celebrate” the culmination of my 52nd journey around the sun. I feel like I should have something to say about almost 19,000 days of survival in what is often a hostile world, some profound reflection about being a 52 year-old fourth-year doctoral student, some words of wisdom about what it has meant to negotiate the curves life has thrown at me, but I’m afraid I don’t. I just checked the archives of this blog that is itself almost nine years-old and the last time I wrote a reflective “birthday post” was five years ago - for my 47th birthday. To say much has happened in these past five years would be a monumental understatement. Indeed, too much has happened. Yet I m still here, beat up and scarred but all that much stronger for it. Would I do it again? Probably not, but the question is moot.

I’ve been asked a few times if I have anything “special” planned for today. The answer is not only, "not this year," but, really, not ever. Of the December 6ths that I can remember, even when there was something “special” planned, it never really was. Part of that can be blamed on the time of the year, something I am sure many of those with December birthdays can relate to. Mine is early in the month, the holiday “season” doesn’t have a huge impact, but since many of those years (maybe most) have found me in school, the end of the fall semester comes right about the same time as my birthday. This year December 6th falls on a Saturday, but it is smack-dab in between the end of the semester and finals week. I have work to do - lots of it - and that, while no different than most other days, is special enough for me.

As I get older, other special dates have been added to my life, and as I get older still, some of those have faded back into the nothingness they were prior. Some of those anniversaries, to me, have far greater significance than that of my birth. I am not really sure why this particular day always leaves me so underwhelmed. Four years ago, a good friend threw me a surprise party for my 48th birthday (and it almost worked, I was surprised until just before I got there)... it was the first time anyone every threw me a surprise party. But even that, not through any lack of sincerity on his part or of those who attended, felt odd, uncomfortable and more than just a little weird. Two years ago, for the big 5-0, there was a profoundly unforgettable dinner celebration with friends that I’d give almost anything to forget. (That is a different story for a different day and one, I am quite sure, some wish I would not tell at all). Two days later my family came to celebrate, and that was nice, but any excuse to get the entire family together these days is nice - I was happy to provide one.

This morning I met some friends for breakfast. It was not a “birthday breakfast,” it’s just something we do from time to time. It just happened to fall on my birthday today and as such, in addition to in-person birthday greetings from those friends, one paid for my breakfast. That simple gesture may well be the highlight and the best gift I receive all day - and I mean that with complete sincerity. Because, as it turns out, it really is the simple things that mean the most; the relationships I have built in my life and especially in the last few years mean more to me than any compulsory birthday greeting or present ever could. While I appreciate those who took a moment out of their day to wish me a happy birthday, I am far more grateful for those who have been there every day.
Posted by Michael K. Althouse at 11:02 AM No comments:

I occasionally get requests from others to post a "guest post" to my blog. Usually the solicitation is accompanied by words like, "We think this would be of interest to your readers," or "you may use this free of charge as long as you link it to our site," etc. They are almost never of "interest to my readers," certainly not of interest to me, and I can write my own stuff "free of charge," I don't need the graciousness of others to help me fill my blog. 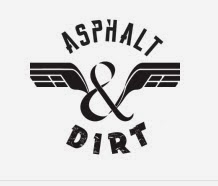 The link I am posting is not a "guest post," but rather a story written by someone else about me in a new online magazine called Asphalt and Dirt. It is a magazine designed to appeal to all facets of motorcycling and the motorcycle lifestyle. I offered a story from this blog, but the publisher wanted to go beyond just the road trip story I wrote in 2010, An Epic Journey, and delve deeper into what could best be viewed as the "lifestyle" so many riders identify with. This story, Crossing the line, does that. Enjoy.


Posted by Michael K. Althouse at 8:48 AM No comments: