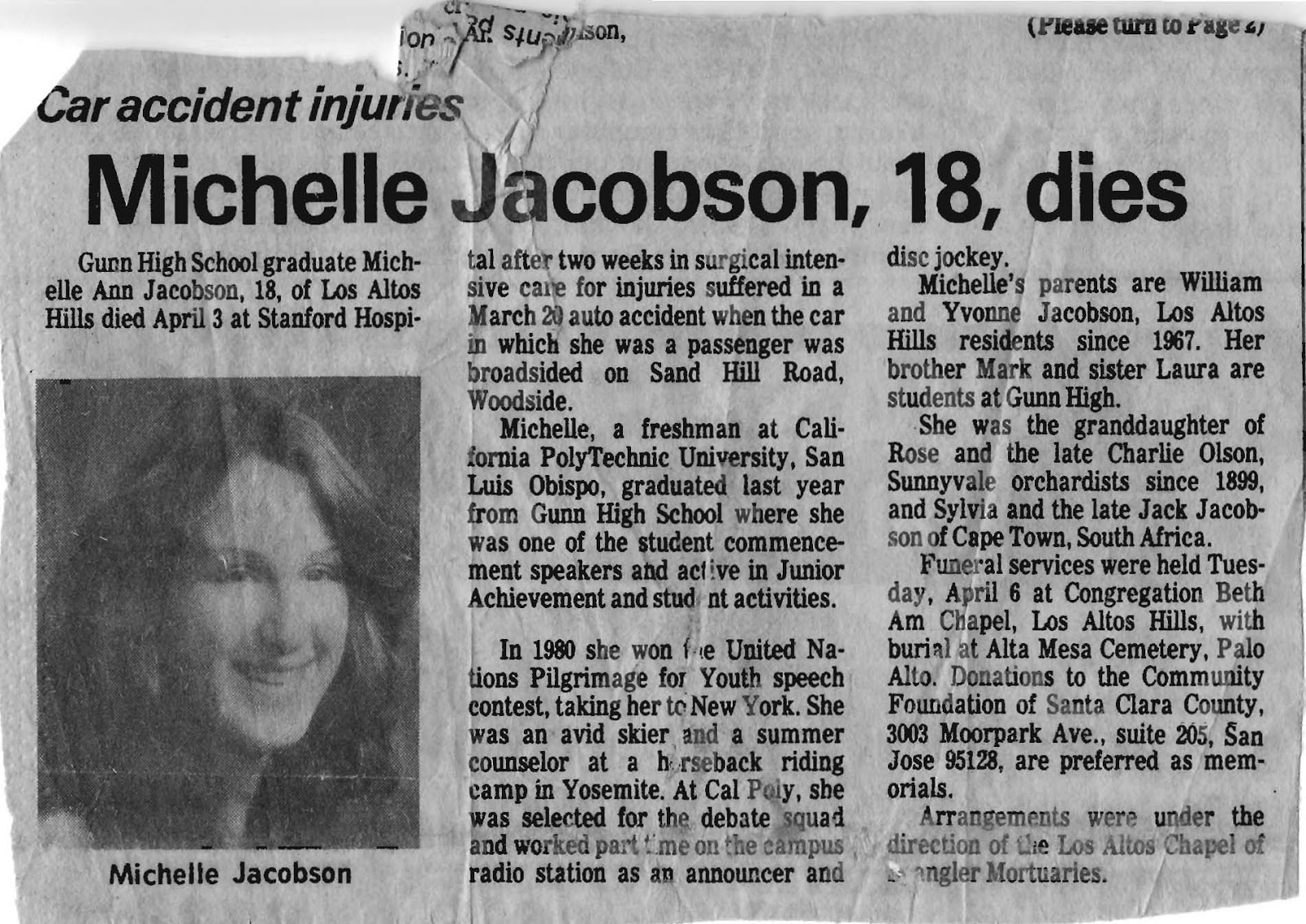 It’s near the end of April, 2014. I used to go to a particular cemetery this time of year and visit an old friend. She was a passenger in a car that was driven by a drunk driver when it collided with another car, also driven by a drunk driver, 32 years ago. Of the two drivers and three passengers, Michelle was the only one fatally injured. She passed on April 3rd, 1982, never regaining consciousness from the wreck that occurred about two weeks earlier. The accident happened on Friday night, March 20th, 1982, but I didn’t find out about it until the following Sunday. I went to go see her at Stanford Hospital, I held her hand; her mother told me that she would never wake up. I was mad. I was mad at both drivers, I was mad at Michelle and I was mad at a god I didn’t even believe in. I was just 19 years old and never experienced the death of a close friend. We thought we would live forever… 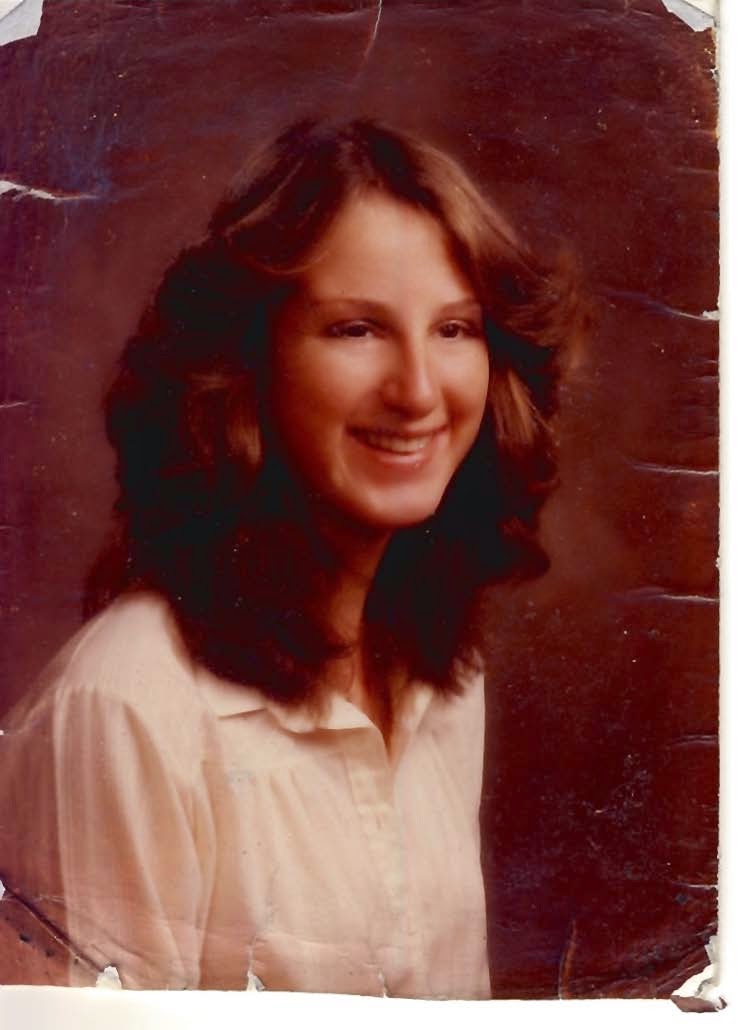 Michelle and I both graduated high school in 1981. We didn’t go to the same high school, but we lived very close to each other and her school, Gunn High in Palo Alto, was actually geographically closer to me than my school, Los Altos High in Los Altos. At the time there were no cell phones, no pagers, no Internet and no personal computers. A few of the kids were fortunate enough to have their own telephone extensions in their rooms, but a handful of us took a “geekier” route with the CB radio. Her handle was “Snow Bunny” and mine was either “The Unknown Comic,” “Joe Cool” or, towards the end of my CB days, “Power Mike.” Hers came from her ties to Grass Valley and her love of skiing (something we had in common, though she was much, much better than me) and mine from decidedly more stupid shit – the Gong Show, Snoopy’s alter-ego and, because I had an amplified microphone for my CB, a “power mic.” We met each other “on the air” some time in 1979 or 1980, and in person not too long after (when one or both of us got cars).

At the time, virtually any girl who was a friend had “girlfriend” potential and Michelle was no exception. She was smart, funny, confident and beautiful. We kissed just once – it wasn’t magic - but in a short time we formed a friendship that would last forever. While forever was cut tragically short, in a sense forever continues to this day. And that was and still is magic. She had her boyfriends, I had my girlfriends, but we always remained close friends. She was my date to my senior prom. She took up an entire page in my junior yearbook and two in my senior yearbook. In both she said that she would always be there for me. Little did I know how wrong and right she would be. 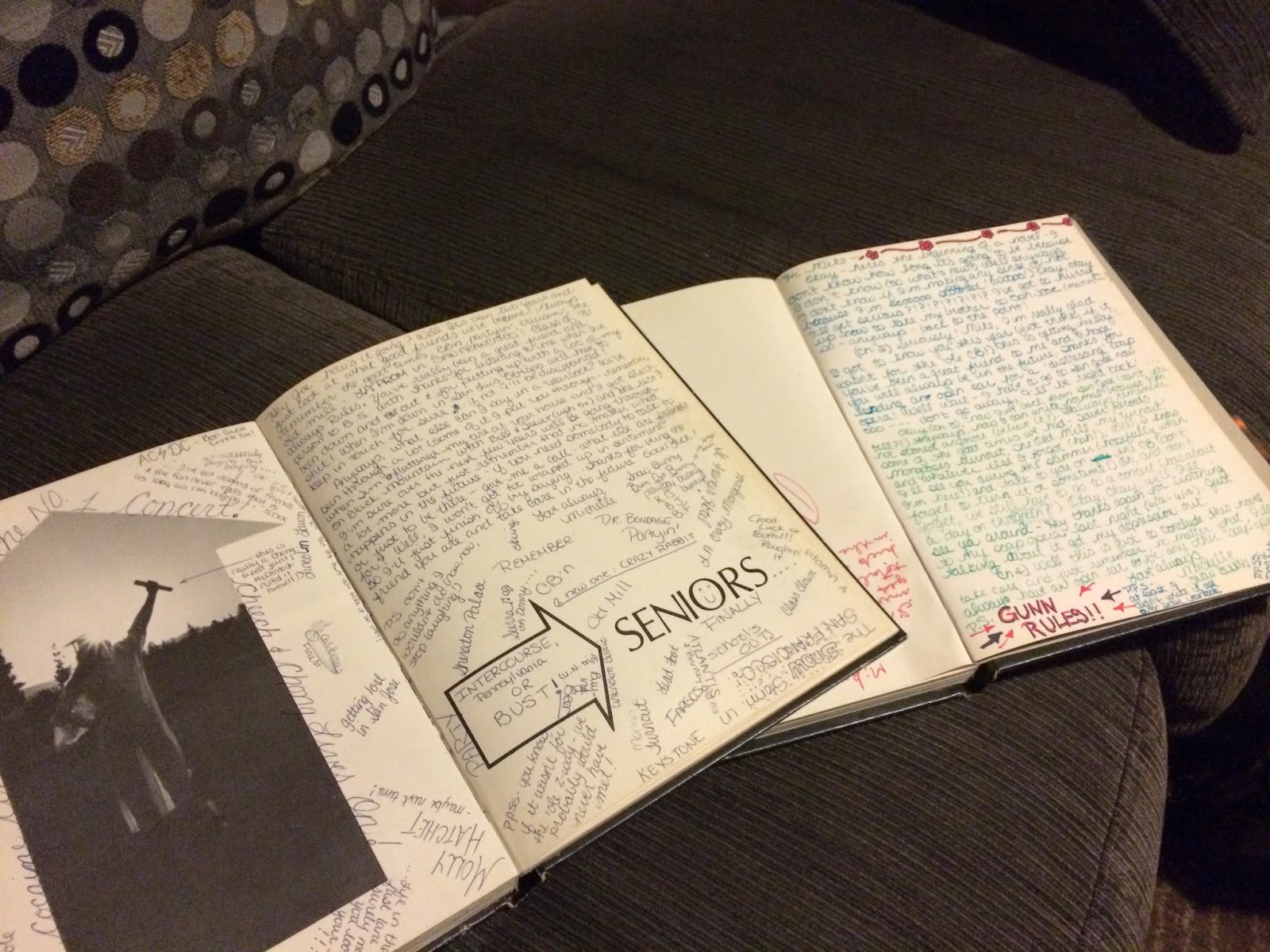 I don’t know why today was the day she decided to come visit. Maybe it’s been a while. I don’t think about Michelle everyday, but she has never wandered far from my consciousness and I believe she has firmly rooted herself in my subconscious, my soul, and/or my spirit – take your choice. It could be because I happened to be at Stanford Hospital on Sunday, because my parents’ home is practically a stone’s throw from the Alta Mesa Cemetery and Gunn High School is just across the street from there. I don’t know, but the last of my yearly pilgrimages was many, many years ago. And even all these years later it just seems so very wrong – that the one person I knew who had so much to offer the world, who was so genuine, who was on her way to accomplishing so much would be snatched away just like that.

Michelle was accepted to Cal Poly San Luis Obispo. We hung out and did a lot together the summer after we graduated, but she was growing up, and going away. I had no plans, no aspirations, and no motivation other than seeking my own pleasure. I just wanted to stay a kid and keep the party going. She came home from time to time, we hung out, but she was always going to go back. Michelle would ask me, “What are you going to do after Foothill (the local community college)?” I didn’t know and probably said exactly that. Maybe I said something stupid like, “Roll up a joint!” or “Take a bong hit!” I think she saw much more in me than I ever did, but she never pushed me towards anything and she never pushed me away. She never became "too good" for me. 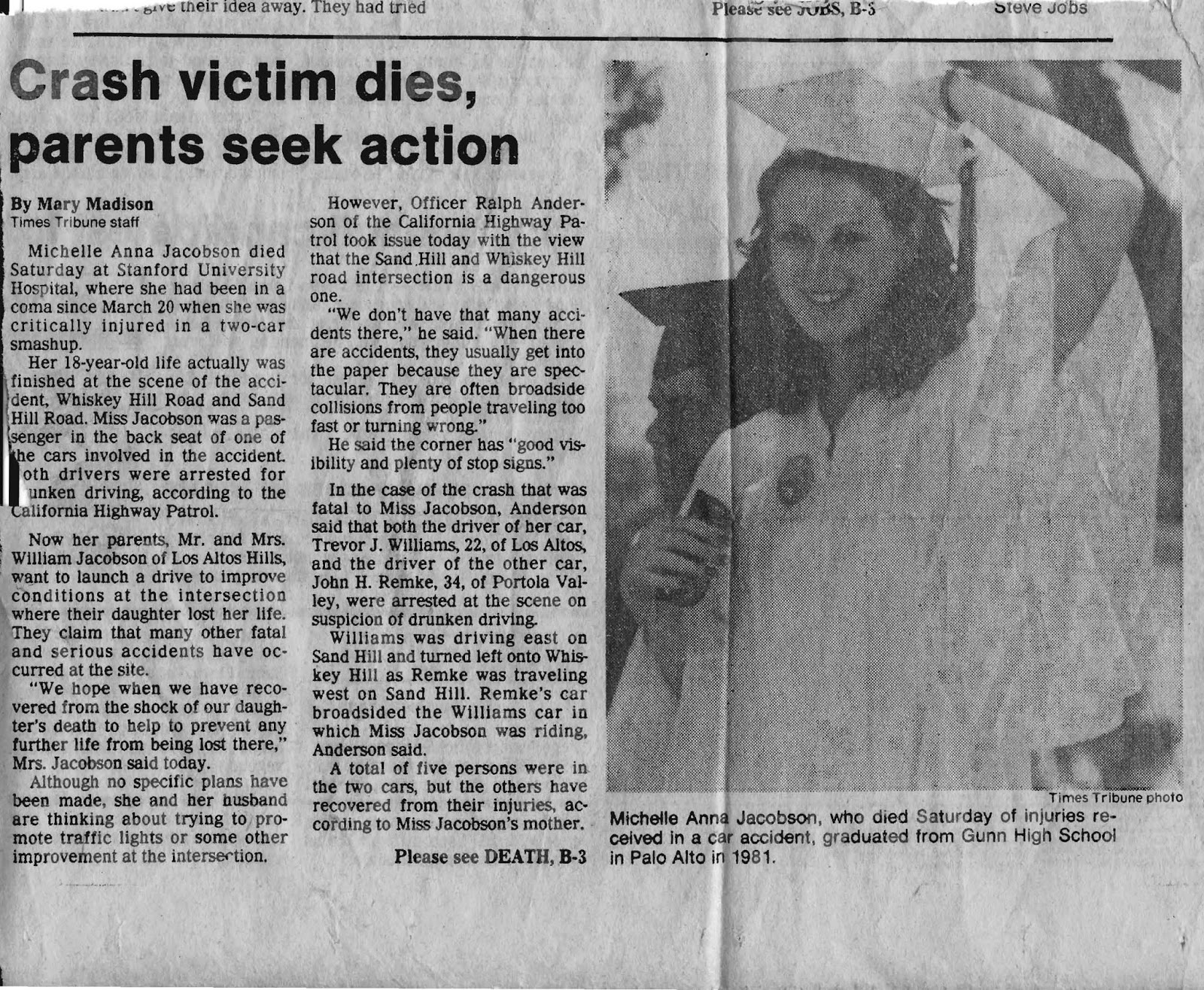 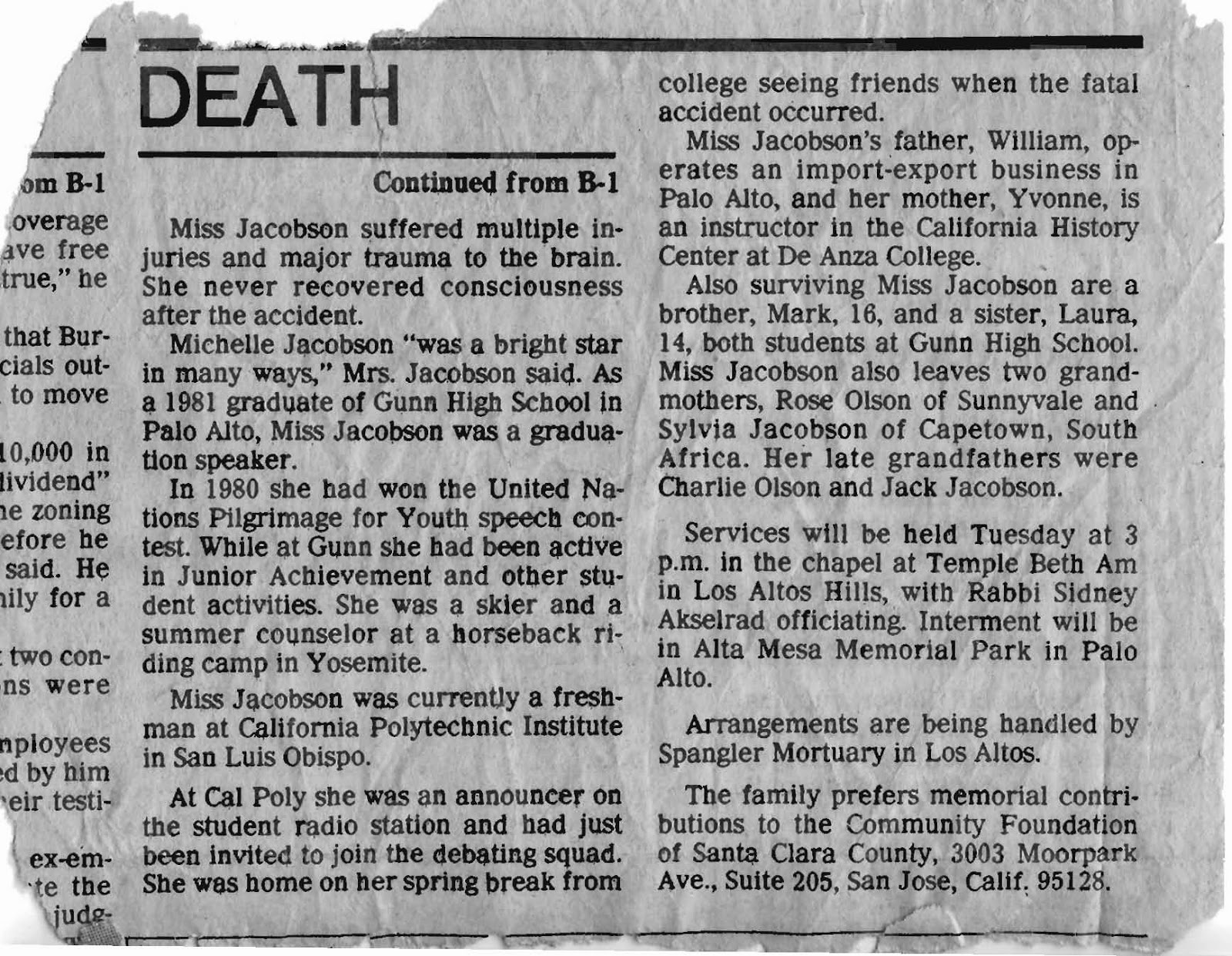 The newspaper said that she was home for Spring Break, but I don’t remember it that way. As I recall,  she came up from San Luis Obispo that weekend kind of undercover. I don’t remember it being a school holiday or anything, but she was close enough that driving up for a weekend was feasible and… ZZ Top was playing that Saturday night at the Cow Palace. I got us tickets and we were going to meet up Saturday afternoon. She was out with her old boyfriend that Friday night and I was out hanging around somewhere – the strip, the mall, a party, who knows? I was not the most ambitious 19 year-old kid around. Saturday I waited for Michelle to call, I tried to call her and it was getting late. The concerts back then were “free-for-alls,” or “festival seating,” it was all first-come, first serve and we needed to get in line. Besides, that’s where the party was, in line. I finally gave up and called my buddy, Rich, to see if he wanted to go. That night I was pissed. I thought she stood me up, but I got over it fairly quickly – ZZ Top was on their El Loco tour and they nailed it.

The next day Michelle’s mother called me with the news. I didn’t realize the gravity of the situation until I got to the hospital and even then I was in some sort of shock, in denial. It couldn’t be, it just couldn’t. Rich went with me and on the way out to the car all I wanted to do was “beat the shit out of something big” (my exact words) and get stoned. While I didn’t beat anything up, I am quite sure I got very stoned. I felt guilty for being angry, I felt like I should have done something, been there, saved her - somehow. The next few days were a blur, I don’t know when the decision was made to disconnect life support, but I got to see her one last time before they did. I still, all these years later, feel like I was someone else, like the memory is a movie of someone else visiting one of his best friends who was, for all intents and purposes, already dead. It still doesn’t feel real.

I had a 1973 Honda 550 Four and at the time it was my only running transportation. I didn’t have to ride it to the memorial, but she would have wanted me to. She liked me for me - and that is saying something because it would be many years before I discovered who that was. She not only was able to see the real me, I think she saw a potential that I could not. She liked my old, loud, obnoxious Honda just fine, and I rode it proudly. I was asked to drop a handful of soil into her grave; as I worked the dirt between my fingers and let it drop, a sudden and profound sense of loss came over me. It has been with me ever since.

As the years wore on, Michelle occupied less and less of my waking thoughts. My life was becoming a very busy and hard – there were times when I envied her and wondered how much different than mine would her life have been. Then, in October of 2000, my life nearly came to an end. After five weeks in a medical coma, I came to with some very vivid and profound memories. And she was there. She was more than there, she was my guide, a soothing, friendly presence in a strange place. There are those who will say that I did indeed experience those memories, but they were due to the nature of my injuries, shock and pain medication – they might be right. They also might be wrong. I don’t care, because in either case or by some other explanation, the memory is based on reality, a presence who, had she not once been so connected in my life, could not have reappeared in my time of greatest need.