This time of year, historically, has been somewhat eventful for me. I guess I should thank technology, generally, and Facebook, specifically, for connecting the dots necessary to see back so clearly and, eerily, precisely. Indeed, I cannot say whether this time of year held any more or less "profound" memories before the social media boom (which, coincidentally enough, started around the same time I got clean), or whether the memories that are documented are only profound because of that documentation. The profundity could also be a function of the strides I have made in that same period of time.

Regardless, spring, in the recent past and for whatever reason, has been an interesting time of year. It's been a time of new beginnings, new hopes and new dreams and it has been a time of closing chapters, the letting go and the passing on. In the not too distant past, this has been the time of both finishing school and completing goals, one of moving on to new goals and degrees. It has been a time of marriage and divorce. It has been a time of preparing for my permanent relocation and the time of my return. Spring, it would appear, is all that and more.
This is the end of my sixth semester teaching as a full-time gig. I have been working in my career, my fifth or sixth (seventh?) major career change so far, for about three years. It’s actually much longer, but I was doing it as a grad student and only part-time before. I don't know what is normal, but it seems most people stick to one or two, maybe three (probably related) careers in their lifetime. Not my story. Anyway, while perhaps not a major profound milestone in the life of Mike, it is a reasonable time to look at where I am and what could be coming down the pike. 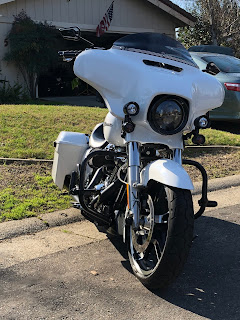 I hope nothing is. I am content. I am not looking for the next place to go, the next job to have, the next anything in the short term. Long term, yes, I am within maybe ten years of retiring and at that point I'll be making new decisions, looking forward to new adventures. But right now, I am good. There is one thing that is coming up this summer which could fall into the major life altering category, but it is also in the "new beginnings" sub-category, and, as such, is one that holds great promise. Some risk? Sure, everything new has some risk, but I’d like to think I have learned a thing or two about such things in recent springs. I am confident that this consolidation of households will be as strong as its components.

And, of course, there are motorcycle treks planned for the summer. But even those, while seriously gratifying, are not "new." Every ride is different and the plan is still largely a non-plan, but I have many, many miles of experience doing just like that. I can’t say that spring is my “favorite” time or year - each season has something special about it - but one characteristic that defines it, that of renewal, certainly applies.

Posted by Michael K. Althouse at 9:00 AM No comments: