For the past two weeks, I have traveled in 10 western states logging more than 5,000 miles on my motorcycle. Almost a week of that was spent in Sturgis, SD for part of the 10-day annual rally that attracts as many as a half a million motorcycle aficionados. Suffice it to say that I am a motorcycle aficionado. This was my fourth consecutive pilgrimage to this veritable motorcycle Mecca and each has been a little different. 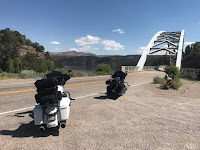 This year my journey started out with a two-day solo ride from my home near Sacramento, CA, south along US 395 to Bishop, CA for the night. At less than 300 miles, this was the shortest day on the road (that is, not including the days spent in Sturgis). The next day I rode through Death Valley to Williams, AZ. From Kingman, AZ – paralleling Route 66 on I-40, I was on familiar ground. However, from Bishop through Death Valley was not and I was simply in awe of not only the starkness of the desert there, but also of the road leading down to more than 200 feet below sea level. I left Bishop very early in the morning to beat the predicted 117-degree heat that day, so when I arrived in Furnace Creek at about 9:00 a.m., it was only a little more than 90 degrees.

In Williams I met my friend who rode out from Baton Rouge, LA. Bob and I then rode up to and through Grand Canyon National Park, through the Four Corners Monument to Durango, CO. From there we rode up the “Million Dollar Highway” (US 550) through Silverton and Ouray before settling down in Grand Junction, CO for the night (my third, Bob’s fourth since our respective departures). Although I’ve ridden much of this route in the past, some of it was new to me and what wasn’t was absolutely worth riding again. 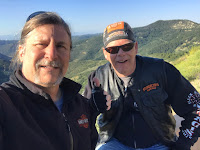 The net day we continued generally north towards Cooke City, MT. Our original plan was to ride through Yellowstone National Park to Cooke City, but the distance we needed to travel that day made it necessary to divert around the park. Because our schedule allowed for two nights in Cooke City, we were able to ride through Yellowstone and Grand Teton to Jackson Hole, WY and then return to Cooke City, circumnavigating our way around Yellowstone the next day. We did not expect much out of the ride from Grand Junction to Cooke City, and for large sweeps of that ride we got exactly that, however, there were a number of stretches that were unexpected in their grandeur. What we thought would be a largely utilitarian ride turned out to be as glorious as anything we’d ridden the entire trip – including roads like Bear Tooth Pass that we knew (me from personal experience, Bob from my stories and motorcycle lore) would be epic. Grand Junction, CO to Vernal, UT – epic. Vernal UT to Rock Springs, WY (Flaming Gorge) – epic. The Wind River Canyon – epic. And from Cody, WY to Cooke City, MT, over Chief Joseph Pass – epic.

Yellowstone and Grand Teton Park were beautiful from a sight-seeing perspective, but due to the crowds, the buffalo and the low speed limit in those parks, the ride itself was not what I enjoy most about motorcycle treks. However, that was merely a prelude to the next day, a ride up and over Bear Tooth Pass – at almost 11,000 feet – into Red Lodge, MT. From there we made a course to Sturgis, but the first half of getting there was not just another utilitarian ride like it could have been. This was a route my friend Art and I rode home two years earlier, but I told Bob to make the decision as to the way we would go. I felt that with all the excellent roads we had already ridden, getting there on that day was enough. However, he chose the exact same route Art and I rode, taking the Big Horn Scenic Byway in Wyoming. Again, epic. By the time we reached Sheridan, WY, we settled into a leisurely (but with an 80-mph speed limit, fast) ride on I-90 to Sturgis. We arrived in the afternoon on Thursday, August 3rd and checked into our cabin (really a fully self-contained suite, complete with a kitchenette) at the Elk Creek Resort.

For the next six nights, we would stay at Elk Creek, located about half-way between Sturgis and Rapid City, SD. The next day I picked up my girlfriend at the Rapid City airport and she stayed until the following Tuesday. Christine and I have been on many rides, including a long weekend trip to Southern California, but to ride out to Sturgis with me on my bike was logistically difficult from several perspectives. The time needed and the luggage space for both of us were primary among the logistical challenges. However, flying in to meet me there and out before my ride home solved that issue and also allowed me the time to make the ride there and back. Part of Sturgis is having my motorcycle there and, at more than 800 pounds, it is a bit much to be checked baggage. Having Christine there made what would be “just another Sturgis” not just another Sturgis. We did almost all of the Sturgis stuff – people-watched, shopped, ate, and, of course, we rode. We went to Mount Rushmore, Devil’s Tower, rode Iron Mountain, Custer State Park, Spearfish Canyon, Deadwood, Keystone, Sundance, Belle Fourche and more. The following Tuesday I rode Christine back to the airport before packing up in preparation for my three-day ride home.

Not to take anything away from the time I spent with Bob and Christine, but the ride home, this time, holds a special place on this particular trip. Not more special, but different special. As much as I enjoy riding with others, and as much as I enjoy spending time on my bike with my girl, and as much as I like riding in and around Sturgis with a half-million like-minded souls, I am equally happy riding by myself. The three days back were just that – Christine was already home and Bob was riding back to Baton Rouge. I did not have a route planned (generally speaking, I never plan a specific route when I ride by myself), but the possibilities included both roads I’ve ridden before and those I have not. I chose to go south through western Nebraska and then west through Cheyenne, WY and Denver, CO before stopping for the night back in Grand Junction. That ride took me almost 700 miles and right through Colorado Rockies on I-70. That stretch of interstate is among the most beautiful I’ve ever ridden – comparable to I-80 through the Sierras and I-90 from Coeur d’Alene, ID to the Montana border. I got rained on a little (just the third time throughout the entire two weeks – that must be some kind of record), but besides that minor inconvenience, the ride was incredible.

The next day took me west through what was left of Colorado, though all of Utah and into Ely Nevada. The road through Utah is magnificent. I passed, but did not enter, a number of parks and monuments and I could not help but think that, with all the grandeur surrounding me (mostly on I-70, but from Salina, UT on, I was on historic US 50), how did they decide where these parks should go. I can only surmise that as awesome as what I was riding through was, the parks must be that much more spectacular. A return trip with many more detours is definitely on my list. I spent the night in Ely after about 430 miles of riding. So far, the return trip covered all new roads for me.

My last leg took me the rest of the way on US 50, a stretch deemed by Life Magazine “The loneliest road in America.” It was not meant as a compliment, but the state of Nevada took advantage of the slight and turned it into a marketing tool. Now, more than 30 years later, the old Pony Express route has many travelers with their “US 50 Survival Guide” in hand, getting their “passport” stamped at various stops along the way. Collect five of the eight stamps available in Baker, Ely, Eureka, Austin, Fallon, Fernley, Dayton and Carson City and the state of Nevada will send a certificate commemorating the achievement. I collected six – I skipped Fernley and Carson City. Regarding the road itself – I have ridden far lonelier roads, including its US Interstate sibling to the north, I-80. US 50 is chocked full of history, heritage, stories and scenery. True, there are not a lot of people along the way, but those who reside in these scattered small (and not so small) towns are friendly and genuinely welcome visitors. While there are several long, straight stretches, they are broken up by surprisingly technical twists over several mountain passes. 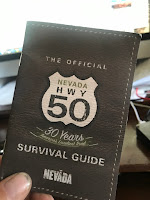 I think it’s safe to say that Life Magazine was dead wrong about US 50, but it’s not just because their characterization of the road as monotonous, barren and boring, it is in the idea that places with no or few people are, by definition, lonely. Loneliness is a state of mind – there are those who are lonely in a crowd of people. I have been there myself. What I sought and what I found (and I knew I would) was solitude. Unlike loneliness, solitude is difficult, if not impossible, to find if there are too many people around. I stopped a few times along the way and most of those stops were in places that I could walk right out on the highway and not see another vehicle or person. I was alone with my thoughts, but the furthest thing from my mind was any inkling that I was lonely. And as I remarked in one of my Facebook posts, with my motorcycle, gas in the tank and miles of pavement, who has time to be lonely? It was magic. 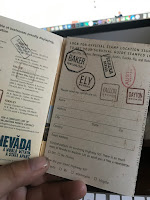 By the time I arrived in Carson City, I was on familiar turf. Thousands of others were there, too. The magic was almost over, but not before a nice ride through South Lake Tahoe, up and over Spooner Summit and descending the 7,000 or so feet back home. I have ridded that section of US 50 more times than I can remember, but this one was different and I am not exactly sure why. Maybe it was because for the first time in a long time I did not take the magnificence of that stretch of highway for granted. As awesome as so many of the other roads that took me out and back were, here is this one in my own backyard that ranks right up there with any of them. And I was almost home. It was the last of the magic before hitting Placerville, the traffic and the heat of the greater Sacramento area. But that last bit of soulful riding placed the perfect bookend on the perfect ride. 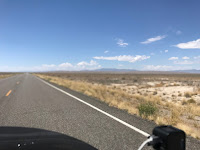 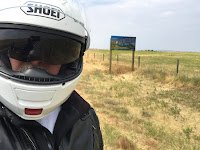 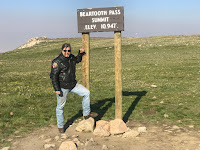