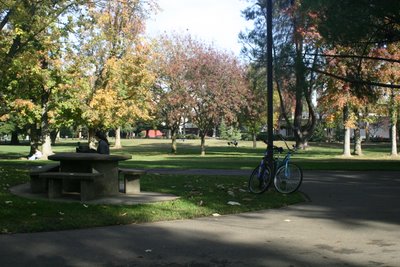 It’s a beautiful day in a lovely park-like setting at California State University, Sacramento – locally and affectionately known as Sac State. It’s mid-November, a balmy 65 degrees with virtually no wind. The sun is filtering through the pines and oaks; the grass is damp and the earth below it, soft. The days of enjoying the great outdoors are numbered, but today – the noise of the traffic is barely noticeable in the distance, the birds are singing and the squirrels are scurrying about. Around here, this is about a peaceful as it gets – and it’s enough.

Sacramento is not the largest city around, but it is a major metropolitan area all the same. With a population of about a half-million in the city proper and 2.5 million in the five-county metropolitan area, it’s not even among California’s top three metroplexes – it’s number four. Be that as it may, it still has all the trappings of any big city despite its also-ran status among the state’s population centers.

As such, certain unavoidable realities that every big city faces are true for Sacramento as well. There is the obligatory traffic, crime and filth that every population center has to endure. This is not news. However, it’s the stark monotony of the landscape that has a subtle, yet persistently erosive quality to it that sometimes gets me. It wears on me… the pavement, the cement, the artificiality of it all. For the most part, it all goes unnoticed – working on my psyche in the background, as it were. 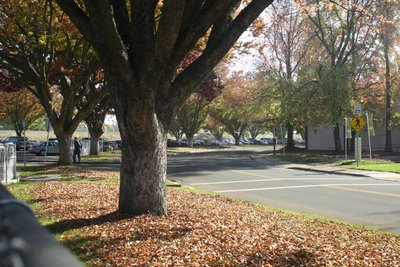 I guess I am not alone. I mean… if I were the only one, no one would ever put a park anywhere. Nobody would care about trees, or landscape strips or even houseplants. That a significant amount of money is spent on keeping a little of the “country” in the city tells me that enough of us feel at least a little longing for a more natural environment. But in the name of progress, convenience… indeed, for the sake of comfort, we forego the inefficiency of our natural world and we build. And build. And build.

The greenery we preserve or, often, recreate comes from a number of sources. There is a variety if institutions beyond local city and county governments that value some landscaping in the landscape. Schools, both public and private, have a history of providing this oasis within many a concrete jungle. Although many grade schools and, of course, high schools provide ball fields and playgrounds for themselves and the community, local colleges and universities provide a slice of nature on a scale that sometimes rivals the largest city parks.

In Sacramento, there are some magnificent parks. The state capital, right downtown, is surrounded by a very large park with all the attendant accoutrements. A rose garden, war memorial and numerous works of art abound. And there are others. However, Sac State, though not a park per se, serves the same purpose – and I’m not sure many even stop to think about it. Other big and not so big schools share this quality as well.

Although the effect may not be as pronounced at more suburban schools like nearby UC Davis, or, further west, Stanford and UC Santa Cruz; at San Jose State, San Francisco State and even UC Berkeley, the contrast is unavoidable. It’s more than just a relaxing and peaceful environment to pursue a higher education; it’s peaceful and relaxing for anyone. It’s a break in the monotony, a needed oasis in the desert of freeways, parking lots and traffic. And it’s there for anyone. Grab a book, get a cup of coffee, kick your shoes off and relax - 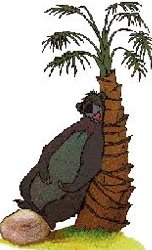 Wherever I wander, wherever I roam
I couldn't be fonder of my big home
The bees are buzzin' in the tree
To make some honey just for me
When you look under the rocks and plants
And take a glance at the fancy ants
Then maybe try a few

So just try and relax, yeah cool it
Fall apart in my backyard
'Cause let me tell you something little britches
If you act like that bee acts, uh uh
You're working too hard

The bare necessities of life will come to you

Living in a city, parks are the necessary element to our sanity of simpler moments, and quiet settings. I, too, am lucky to have so many nice ones within reasonable distances... and only wish I had more time to spend lazing a day away in one.

Your weather sounds lovely.... almost like our own, except for the terrible storm that crossed through yesterday. The days were a bit numbered for beautiful foliage last weekend.... and yesterdays weather mass that came through, took care of ending the season entirely. We are now down to bare trees and crisp temps. At least it was beautiful while it lasted.

So sorry I've been absent.... not only has the weather been busy, so have I. I did go back and catch up, and realized that you are in the write business for certain... only wished I'd been around to comment on that earlier.

Hope you are well!

great photos! I missed the colorful leaves this year... but not the frost! *wink

Sac-State's got a nice spot there to study outdoors. I need places like that...

I actually can't stand cement (or noise) all around n go nuts when in the city-scape too long! The landscaping drives me nuts sometimes too because it doesn't look natural- which I obviously prefer.
Thank God for parks, but too bad so many people throw garbage all over them, n make the places dangerous to be in.

Balou's "Bare Necessities" reminds me of being dropped off at the local movie theater for "The Jungle Book" several times in my childhood- That NEVER happens to young kids now! Also I can hear that bouncy Percussion in my head readin along!

Nice tree colors there in your pics!

Mike
I think the aspects of things that are most important to us are hidden because of their simplicity and familiarity, and the ordinary arts we practice every day at home are of more importance to the soul than their simplicity might suggest.

Hans Hofmann frames this much better than i when he says:
'The ability to simplify means to eliminate the unnecessary so that the necessary may speak.'

I've always enjoyed relaxing on greenpaces....be it on school landscaping or local parks.

I'm more of a woods person when it comes to that, but I appreciate the green in teh city for sure.

You don't know quite how lucky you are to live where you do. Yes, the asphalt and cement can and does grate on the psyche, but the beautiful parks do make up for this most of the time.

Over here in the tropics, it's a different situation. A lot of greenery, yes; but, no true city planning either. Quite the opposite of what you experience.

Enjoy your moments like Balou and have fun with bare necessities.

you're quite blessed to be able to spend time back in college. i loved walking around sdsu checking out the older buidings' spanish architecture and my favorite small courtyard...and sitting under my favorite tree. good times :0)

balu sure knew how to live. i need to find those simple moments more often instead of rushing from one errand to the next.

Just got back from a beautiful walk along the walking trail beside the river. The trail........which eventually will cross the country...was originally the Canadian National railway tracks. When that basically became defunct, piece by piece was turned into a walking/biking/cross country skiing/snowmobiling (depending on where you live in the country) path. My piece of the trail is just down the hill from my house.....and if I had LOTS of energy, I could walk to the next province and beyond.

parks and trails and places to connect with the simplicities of life are so very important.....what can ground us more fully than that?

ellen ~ I know how busy is, I empathize. The weather here is slowly turning, but not too fast. It's odd that I have a new appreciation for this time of year... perhaps a new post?

kate ~ it's not the photographer, it's the camera!

snags ~ The Jungle Book was one of the first movies I ever saw - that I remember anyway. It's nice to go to school in an oasis.

harbour ~ I like that quote - I haven't heard it before but I'll remember it.

K ~ I'm more into the woods too, but anything green will do!

belize ~ It's been some time since I've been to the tropics (unless you count Mississippi!), but I think sprawl is bad anywhere.

mck ~ I bet i know that courtyard! My two years at SDSU were fun, but not because the park-like settings - oh no, I was not near mature enough yet.

dana~ Baloo is one of my favorites too. He has the right attitude, that's for sure.