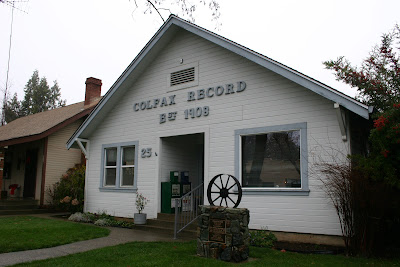 This is the home of the Colfax Record. The paper, established in 1908, has been living here since 1930. Yes, that’s right, I said living. Newspapers are born, live for a while – sometimes a long while – and then they die. Occasionally they come back to life, but they’re never really the same.

The Colfax Record has been in regular publication since 1908. For nearly 100 years it has been the voice of this small railroad town. Although a much larger company now owns it, it is still written locally, right here. And though it’s no longer printed in-house, the presses are close by - just down the hill at the Auburn Journal, the flagship of the local group of newspapers that includes the Record. 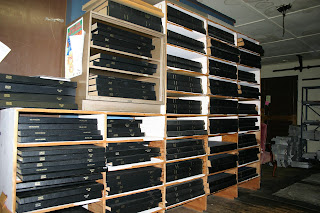 Gold Country Media, the parent company of the Journal, the Record and 15 other publications (about half are newspapers), is itself a smaller operating unit of a larger company, Brehm Communications. Still, the Record, the Journal and the other papers that comprise Gold Country Media are, in many respects, independent. And that is a good thing.

The local newspaper is the heartbeat of a community. It is often the repository for a town's collected history; the lives lived, the tragedies and the triumphs. This very building houses the archives of the majority of the issues dating back to 1908. They aren’t on microfiche or stored in .PDF files - there is no index. The archives are the actual print copies of the newspaper… some almost 100 years old. 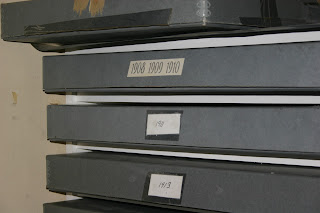 The collection is amazingly complete. Not every issue is represented, and for some reason the entire year of 1956 is missing, but most are here. These fragile volumes are available for public viewing, however, we get a little nervous when the older volumes are requested… and we are very careful about how they are handled. Nevertheless, the Record not only documents the present, it also stores the past. The archives are the next best thing to a time machine.

Someday they should be scanned and filed electronically. Eventually, these fragile volumes need to be preserved and protected. One day, direct access by anyone who comes in and asks will be impossible. These and other very old archives will someday be accessible to anyone at the click of a mouse, much like other historic documents already are. For now, and like many other newspapers large and small, only the recent past is available via the Internet. 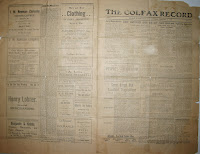 The archives, in their entirety, tell a story all their own. It’s the life story of a newspaper. How it reacted to events that shook the world as well as the local high school football team’s winning season. The procession of publishers, editors and reporters that documented these stories while imparting their own style and personality all contributed to the overall character of the paper. And for the past six months, I have left my mark as well.

I wonder sometimes who might someday be leafing through the 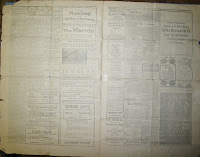 discolored, fragile archives of 2006. I guess perhaps no one will have access to the actual copies, or maybe the preservation of the physical print version will have been replaced by more modern methods. I wonder if the experience can be the same without the soft, velvety feel of decaying newsprint. Without the oh-so delicate turning of the ancient pages, does the history still translate?

No matter, my contribution to the newspaper’s DNA will still be apparent. There are a number of very good, very personal reasons why I do what I do. That my byline will live on as long as the paper does is among them. And so too is my impact on the community I served briefly, in the early years, of the 21st century.
Posted by Michael K. Althouse at 10:48 PM

what a cool thing. and i want to know the mystery of the missing year? can you imagine undertaking the task of scanning all of those onto film? there is a town called colfax near where i live as well.

susiebadoozie ~ I know a little about that Colfax too - it comes up in so many Google searches... like trash fish really, I just have to throw them back.

Hmmm, I'd tried commenting on the earlier post, n cause I haven't (don't wish to yet) switched to a google acct yet, It didn't let me...

It's nice to see the legacy of the good old newspaper being preserved. Even in this internet age, the newspaper still remains the thread that consistently holds the string of local and foreign info together for communities.

I would love to hear more about the mystery of the 1956 records! Sounds like an interesting place!

Blogger is obviously going through one of it's periodic and, unfortunately, increasingly more frequent bouts of technical difficulties. It appears to be a beta/no beta issue. One thing for sure... it sucks. I will soon be looking for an alternative that doesn't suck as much.

i just noticed we have the same question on our profiles about the world being flat...good answer!

so now i know, who the other mac user is coming up on my sitemeter..yup they are few and far between. i was in a computer store the other day, and boy oh boy those mac PCs are COOL LOOKING. i wonder if the PC runs any better than my laptop. maybe i'll have you buy my next one, to avoid the bad luck i always have.

I love the respect with which you talk about the newspaper.

Nice to visit with you, we cross paths on many other blogs :-)

My first time visiting here...via Michele.
Great post! Really enjoyed it a lot. I also live in a small town with a small town newspaper. I write a column for them about the older locals in our community called "Through Their Eyes"....what it was like to grow up and live on this island for SO many years with the changes. So I understand you wanting to preserve your words for the past.

Wow, this is really interesting. I think local papers are so much more important than the large national ones. They really get to the heart of the community and keep everyone together. I live in one of the only suburbs of my city that has a local paper.

I totally forgot to say I'm here by way of Michele's!

It's great that a lot of it is complete and you can count yourself among the names of the long tradition. Hopefully it will all go on microfilm soon or get google to safeguard it its storehouse.