I came of age in the late 70s and early 80s. The music I identify with most closely came from this era. It was the time of “stadium” rock; we had defeated Disco and didn’t really have anything left to fight for. The age of excess was upon us. Nevertheless, a great many classic ballads were produced in the “big hair” origins. Led Zeppelin, Mot the Hoople, Thin Lizzy, Deep Purple, Robin Trower, Bachman-Turner Overdrive… these were the groups that filled out my early record collection. Later in the 80s, bands like Metallica and Tesla captured that same essence of hard-driving, yet elegant rock. 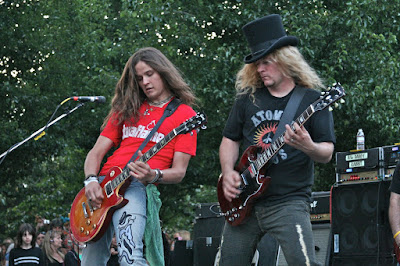 I spent many of my hard-earned teenage dollars pursuing my favorite artists as new albums hit the scene and the subsequent tours that followed. They played very large venues with stacks and stacks of amplifiers and light shows that almost rivaled the marvel of the music. These guys (and some gals) were like gods to me. They were doing something that we could only dream of. For many, the success proved too much and the lucky ones only faded into obscurity… those less so are no longer with us.

As much as the music and the scene surrounding it meant to me… as much a part of my life as it was, it was a passing phase. Times, like the music that accompanied them, changed and so did I. Although the music still lives on in technological devices not even invented when the music was born, the performances are mostly only memories. There are some, however, who refuse to die. Indeed, the music in some cases lives on with renewed vigor - live. 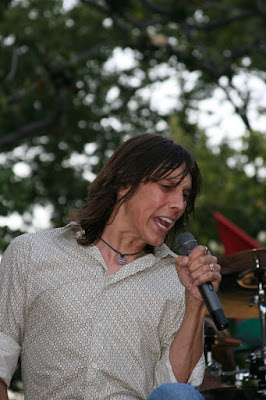 Such was the case in Cesar Chavez Park, downtown Sacramento last night. Tesla, a band that grew out of the Sacramento Rock scene, performed in a free concert to kick off their new album, “Real to Reel.” Tesla, like Metallica and a few others came on the scene at what appeared to be the waning days of what is now referred to as “classic rock” (few terms make me feel older). Tesla made it big in their own right and they are still kicking around today. But their new album isn’t so much about Tesla as much as it is.

Opening the show with a cover of UFO’s “Rock Bottom,” the next 90 minutes were a blast from the past. When they played Traffic’s, “Dear Mr. Fantasy,” there was no mistaking Tesla’s positive influence on this perennial classic. When the clean, crisp opening chords of Deep Purple’s “Space Truckin’” rumbled like lightning through the thousands gathered, I was rocketed back to 1972. I almost forgot I was working. 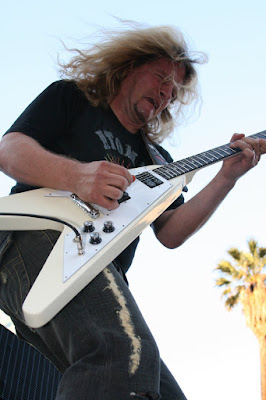 That’s right - working. Well, sort of. No longer a star-struck 17 year-old, I was backstage with my camera bag on my shoulder. As a member of the press, I now have access to the places only the gods and their minions once dwelt. It was difficult to keep it all in balance, but the 500 plus shots show that I was not so awestruck as I was in my youth. I was there to do my job as much as the band was there to do theirs. I wonder who was having more fun? After playing a number of covers, they finished off with some of the band’s own hits, songs that permanently planted Tesla in the history of rock and roll. And they’re not done yet.

DO you work for the Bee??

Cool pics - I gre up around the same time, and don't think I've heard the neame "Mott the Hoople" in 20 years!

Woops - I think if I'd read a cuple more emtries I would have figured it out.

Michelle sent me. I'm from a bit of a later generation of music, but I do remember Tesla! How great it must have felt to watch them through different eyes!

Great pictures by the way!

I've always had a lot of respect for Tesla (even before I met them all in a M&G in the late 80s); it's the respect they showed to a song like Signs. These guys know their musical past and aren't afraid to embrace it.

The pictures are awesome. I wish I'd been able to get my pretty little hands on the first one for my Thursday Thirteen yesterday; it would have been absolutely perfect.

Michele sent me; she must have known how I'd react to your post.

OH YEAH< BABY! You're talking my language - MUSIC. You were right, I loved this post. The best part:

"As a member of the press, I now have access to the places only the gods and their minions once dwelt."

I can only think of one other person who would appreciate such a wonderful job (that would be - me!).

I had a great rock n roll experience this week too, check out Layla's Classic Rock under the post called "Rock and Roll for My Soul"....or maybe its called Vibe Tribe...you'll see it :)

Sounds like a great gig, Mike! :) There's some great photos there -- Looks like a lot of fun was had last night.

That's what I would call a "dream job", Mike...All the Music and Memories and at the same time...the PRESENT...These shots are WONDERFUL and I bet your others are equally as animated...! I am unfamiliar with this band...(my my what a surprise...lol) But you made them come alive for me!

What a concert! I'm sorry, but as I was about to post a comment earlier this morning, I was interrupted by one of those pesky Microsoft crashes. I finally made it back home after a quiet day at the office....

So anyway, here from Michele's.

Wonderful photos. I don't know the band names, but I'm sure I'd recognise the songs if I heard them. Michele sent me.

I love Tesla, I've been a fan for a long, long time, I love 'classic rock' but listen to a lot of newer stuff these days because I've heard so much of the older stuff over & over again on the radio.
Here from Micheles tonight.

Hi, Michele sent me back again. I love that photo of the tree trunk on the top of the sidebar

Michele sent me back tonight---we must have posted at almost the same time...
That white quitar is quite something! THe shape is most unusual to me! I Like It!

Hey Mike! Was by earlier today during lunch... :) Thanks for sharing the fun with us! Michele sent me this evening.

Michele sent me over to see you, Mike--and Tesla too!

That does sound so cool. Being able to use the press pass to go backstage and get those great photos. Rock on? LOL

We're almost the same age so your listing of bands really brought back memories of my youth. One question tho, Mike. The following sentence seems to be missing a word. Did I just misunderstand something?

"But their new album isn’t so much about Tesla as much as it is."

Thanks Dave. It's a little confusing I guess. What I meant is that it isn't so much about Tesla (in the music covered) as it is (about Tesla's rendition of it). It might make more sense if you heard the some of the songs. At times it sounds just like Deep Purple (or Zep, or the Stones or...), but upon closer examination, it is unmistakably Tesla. Does that help?

I have never heard of Telsa; I should check them out. Great pictures by the way.

Hard-driving, yet elegant. That is an EXCELLENT description.

I've not listened to Tesla, but I know of groups that do a lot of covers that I suspect have that same thing going on. There's a stamp of identity that they give some of the stuff they do that makes it their own--and sometimes they don't.

Hi, here from Michele's...music has had a deep influence on my life...I come from the age of love in's and Hendrix, Canned Heat and Janis...but Jackson Browne and others from the 70's and 80's stay with me as well. Great post and pics

How great is that to be able to enjoy your work and have real fun living it! Rockin' after all these years is great isn't it!

Well, Michele sent me back once again, tonight, Mike! Maybe I'm supposed to listen to Tesla? You think?

michele sent me to say hello.

and my favorite tesla song is "little Suzi". I think your job sounds really awesome, I would get distracted though and forget what I was doing, good thing you have focus!

Press passes can be fun-
Good review, looks like the new CD deserves a listen. Lucky you!

Can't say I've ever been into Tesla - or other bands of that particular brand of rock. Perhaps I was a tad too young, although a bunch of girls in my junior high class were fanatical about Metallica...

But what a cool experience, though, to get paid to hang out backstage with idols of your youth :)

I agree with Hanulf. How cool! :)
Congrats on your 4.0 grade point average Mike.

Oh yes, I remember Tesla well. I saw them perform in the UK in the 80's and they rocked!

How cool to be abck stage. Like you though, my perspective has changed and although music is stil important to me the bands are not the all consuming passion they once were.

Off to check out your pics :)

I didn't "come of age" in the late 70's/80's BUT my brother and sister did and I am in love with all the music they listened to....I am a huge fan of classic rock and roll and stadium rock.