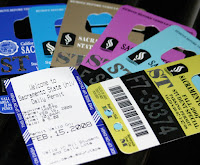 Motivation often springs from the simplest of things. It has been almost two months since I last set foot on the campus of my Alma mater. Two months since the academic life was my life. Two months since I have felt like I have accomplished much of anything. Although that is not true and I know it, the fact still remains that I have not been challenged much of late. Not in terms of intellectual pursuits, or, perhaps more to the point, in terms of commitment of my time. I have had far too much and as much as I hate to face it, the fact is much of it has been wasted.

It is also true that I have ideas of where I want to go next and if experience is worth anything, the path will materialize when the time is right - or when I am ready. I am beginning to think that those two factors are one and the same. I believe I have had enough time to mull it over, I believe I am ready. My little excursion onto campus today didn’t accomplish much in the form of tangible progress toward my next challenge, but it did stoke the intangible but absolutely necessary fire that will see me through the process. I do believe I am ready - the path is clearing as if by magic. It’s just over there…

As if that weren’t enough, that old familiar driving force, that looming and growing nemesis, friend and foe simultaneously - an impending and accelerated deadline is staring me square in the face. Due to factors beyond my control, the deadline for post-graduate applications at Sac State have been moved up by one month. I have been squandering time as though I had until April 1st to have my ducks in order. Now March 1st is my deadline and there is a lot of work to do. No simple application process here, there are forms to fill out, transcripts to acquire, letters of recommendation to solicit and a test to take. Although I initiated the process some time ago, it has been sitting in limbo largely unfinished for several weeks.

Maybe it’s the air on campus - the freshness that is emitted from the park-like setting in the middle of an urban concrete jungle. Perhaps the sight of my home turf for the past almost three years stirred something in me. Could it be the squirrels? I don’t know what, exactly, caught fire, but I miss that place. I miss academia. I am good at being a student - it is a craft I have honed for the past several years. It wasn’t always so comfortable in the classroom, but today it is were I identify best. Getting a MA is the right path for me - it is the next big thing. And that is ok, for it could lead me to a life lived permanently in the classroom - on the other side of the podium.

So now it is time to get busy. The perfect storm has arrived. Time is short, I am motivated, the entrance to the tunnel of the next beginning is just ahead and the light that awaits me on the other side promises to be more brilliant than ever. But it won’t happen because I am smart. I won’t happen because I want it. It won’t happen because I know what to do. It will only happen if I do it. Knowing is not the answer - doing is. So if you’ll excuse me, I have some work to do…
Posted by Michael K. Althouse at 11:23 AM

i admire that you continue educating yourself. i just went back to school for the first time in 26 years to start me on the path to a new career.

michele sent me over today.

Thanks for stopping by my blog earlier, good luck on your new plans!
& belated congratulations on finishing school for the most recent diploma.

Sounds like you're up and raring to go to meet that March 1st challenge :-)

Good luck on your application. :) You've made me miss school too. I loved being an undergraduate; going to class, living in dorms, writing papers.

Michele sent me to think about my Alma Mater too, haven't used the diploma in many years though.
Congratulations on finishing & good luck on your new endeavor.

You're excused! We'll be here when you return.

Yes, you do have some work to do & I applaud you!

When I read your prior posts, I assumed you wanted to be a writer. As for that, mission accomplished!

You ARE a writer, and don't forget it!!

I haven't been "playing Michele" lately, and haven't been surfing blogs much either...but that doesn't mean your blog hasn't been in the back of my mind.

I think your plans are wonderful, and I also find your journey inspiring.

Michele sent me, this time.

It sure feels good to start a new course. I am on verge of it. Never too late to change directions.

I am sure Michele shares your enthusiasm!

Very well said Michael. Your thinking is spot on. How interesting....a thinker who "gets it" when it comes to actually accomplishing something with his knowledge. That awareness is not always a given.

I cannot say that I'm suprised to see you making the next logic step.

Hope you managed to get in that evening ride you mentioned in your comment.

At this point it's difficult to picture you "not doing".

Newron's law of inertia has taken over. You are in motion...