Many of my regular readers and virtually everyone who knows me at least externally knows that I am a “motorcycle enthusiast.” I have been riding more or less (lately more) for more than 25 years. For the past four years, my steeds have been Harley-Davidsons. Ever since I first became enamored with motorcycles and even before I knew the difference between the brands, it was this iconic American motorcycle that was calling me. Ever since that first bike, my “next" bike was always going to be a Harley. For reasons that are as varied as they are complex, it was not until about four years ago that my next bike finally was a Harley. 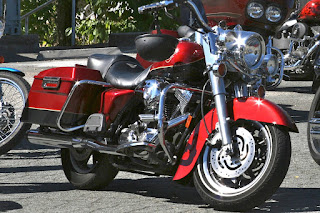 And now I ride more than ever. Mostly because I have a motorcycle to ride – indeed those “less” times were actually “not at all” times as I did not have a bike to ride for periods of those many years since my first bike. But I am not a brand elitist – my preference is Harley Davidson, but I still share a bond with anyone who loves the two-wheeled freedom that a motorcycle brings. We pass one another on the road sharing a knowing nod or a wave, acknowledging the freedom we experience through the same psyche. We come from all walks of life and perhaps ride for very different reasons, but at our cores there is a common thread we all share.

It would be more economical than driving if I road my bike everywhere. Based on that factor alone it might seem like the ideal mode of transportation, especially when considering how much I love to ride. Of course, there are many instances where that just isn’t feasible; rain, room for passengers and the ability to transport “stuff” are the most obvious. Still, that leaves many more opportunities to ride than I take advantage of. Why? It is a question I ask myself from time to time and although I can’t say with any degree of certainty, some of the aspects I enjoy most about riding don’t seem to manifest under certain circumstances. That peace and freedom… the clarity I almost always find when on two wheels just doesn’t come when commuting to work.

But that still doesn’t begin to explain why. Part of it, to be sure, has to do with the commute itself. The vast majority takes place on U.S. 50 between Folsom and Sacramento. Even when my commute occurs during non-commute hours (which is not uncommon), it is an altogether less than inspirational ride. This section of U.S. 50 is a multi-lane freeway with little variation from mile to mile. And when the ride occurs during commute hours? I am usually more stressed when I get there than when I left. Driving for everyone else is a necessity when riding a motorcycle – when there are literally hundreds of motorists to look out for it can be downright exhausting.

There is more to it than that, though. When I embark on a ride such as the one I took this morning, it has a purpose – not necessarily to get anywhere, but rather about going somewhere. My ride this morning was a loop I have ridden many times before and most of the 75 or so miles were not on the freeway. I entered it with a certain mindset with no timeline whatsoever. On this particular ride, I was with many other like-minded souls who gathered for a charity poker run that ran through urban back streets before coming to the rolling Sierra foothills. I knew what to expect from the road and I knew what the ride would give me… it never fails.

To commute on my bike negates what I ride for. Moreover, it can almost counteract the benefits of rides like the one today. Although I have ridden to work and I most definitely will again, it is usually not my preference. My car serves that purpose better most of the time. I typically don’t ride to get anywhere. I ride to ride and when the purpose entails anything more than that, it can only take away from the experience.
Posted by Michael K. Althouse at 4:30 PM

that freedom is something sacred- don't let economic things drive you into riding, keep it from the heart. :) this post is so reassuring for some reason.