I am experiencing some conflicting feelings right now. On the one side, I have a great deal of serenity and peace in my life and I have experienced the very real and direct manifestations of that peace more than once since waking about six hours ago. On the other side, there is a latent frustration, no, irritation with aspects of people and institutions in my life that should behave differently, in my opinion at least. Yet, when coming to my keyboard to ventilate and let some of these irritants move along into the cosmic wasteland, I find that they already have… 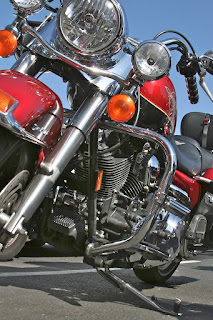 Yesterday was a beautiful, warm (for mid-February) and sunny day in the greater Sacramento metroplex. Although it was a bit chilly in the morning, it was not so cold that extreme cold-weather gear had to be adorned before pulling my Harley onto the road; standard leather apparel appropriate for cool temperatures was all that was needed. Several friends and acquaintances met at a local restaurant before a short-ish ride through Auburn and on to Grass Valley. The sun never stopped shining as the temperature slowly rose as the day wore on. Some 110 or so miles later I was resting comfortably at home in a Zen-like state, my body and mind completely joined through motorcycle meditation. Soon, I drifted off to sleep.

After a short nap, I decided it was a good night to do nothing. Waking just after dark, I felt too drained to go out and do anything. I stayed home with the intention of watching the Winter Olympics on TV, but that plan changed as I channel-surfed through the inept and irrelevant programming that NBC has decided sports coverage consists of. Channel surfing destroyed what was left of that Zen-like state I had achieved just hours prior. I am never truly surprised by what people will produce in the name of “art,” but it never ceases to amaze me what people will watch on TV, for if there were no viewers, these inane reality shows would never get any airtime. It is a sad state of affairs that this is what we are entertained by – largely the pain of others.

It is surpassed only by real reality – the live action stupidity, ruthlessness, rudeness and carelessness of too many. The news is full of it and often we are unlucky enough to be there in person – live, with a front row seat. That I still feel this discontent, even though I’ve only interacted with a handful of people and have not yet gone anywhere else today, is testimony to the potency of the negative. Yet, those I have interacted with reminded me how important my friends are to me. Those interactions are indicative of the quality of the people who have regular access to my life – and they are the ones that matter. Not those who produce that inept “reality” garbage on TV and certainly not those who seem to go out of their way – often without a clue - to make the lives of others miserable… they only affect my life if I allow it.

It would appear that Harley meditation has persistence as well, for even with the ugliness that too many bring to an otherwise beautiful world, the vast majority of those around me are at least decent human beings – and many surpass decency. Life is too short to allow externally created negativity – that being served unto me by others (on TV or live) or that which I create myself. Fortunately, once far enough removed from it, it is easy to spot and avoid. And as long as the sun is shining, I can always jump on my Harley and gain clarity - one mile at a time.
Posted by Michael K. Althouse at 2:26 PM