One of my favorite lines from the film version of The Lord of the Rings: The Fellowship of the Ring comes towards the end when Captain Boromir, with his last breath, accepts Aragorn as the heir to the throne of Gondor and, as such, pledges allegiance to his “king.” Aragorn would be, of course, a good king, a literary manifestation of Plato’s “philosopher king” who would, ultimately, rule over utopia. Indeed, once the army of Sauron was defeated, Aragorn returned to white city of Minas Tirith to assume his lordship over the kingdom. Middle Earth entered the Age of Men; peace, good fortune and good will followed. All was well. King Aragorn was wise and strong and benevolent – he did not need to demand allegiance. It was freely given.

Of course, so long as good, benevolent philosopher kings are plentiful, there would be no need to overthrow such a regime. Unfortunately, although absolute power does not corrupt absolutely right away, ultimately it will, absolutely. A long-term or permanent succession of benevolent totalitarian leaders is never a safe bet. Absolute power corrupts (eventually) absolutely. That is why the founders of these United States of America put together such wonderfully enduring representative republic. We, the people, are in charge and sooner or later, when power begins its march towards absolute corruption, our founders gave us the ultimate weapon – our Constitution.

When a new president is sworn in, he (or, someday, she) swears to defend and protect the Constitution. He or she, essentially, swears loyalty to us through the document that puts the power in our hands. We never swear any allegiance to the president. Ever. We do swear “allegiance to the Flag of the United States of America and to the Republic for which it stands…” But that is far different than Boromir’s acceptance of Aragorn as his king. In terms of our constitutional democratic republic, Boromir would be accepting the US as his country and through that acceptance, it’s laws and power structures. It might seem subtle, but the difference is important.

Donald Trump is the President of the United States of America. I did not vote for him. I believe that he is the least qualified president that “we, the people” have ever sent to the White House. But what I believe is not important – we, through constitutional authority, have decided. With a significant popular loss and a thin, but decisive, Electoral College win, Trump’s election is hardly a “mandate.” In some respects, however, it is. The Constitution allowed those who hold the real power in this country to give Washington DC and politics as usual a great big orange middle finger. We, the people, have spoken. 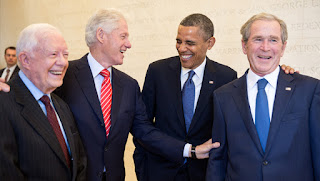 But what about all those who cannot fathom a Trump presidency? I get it. In many respects, I’m right there with you. But… for those who are claiming “He’s not my president,” I have some perspective. First, this is not new; many, many never accepted President Obama as their president either. Maybe you feel your reasons are more legitimate? I’m not going there. But there is more. No president has ever been “my president.” I don’t serve any president – they serve me. All presidents have been President of the United States of America. All have served to defend and protect the Constitution. In other words, they have pledged allegiance to us. They are serving us. None of them are or ever will be “my president” the way Aragorn is Boromir’s king.

In Gondor, King Aragorn is the law of the land and so long as he lives and remains uncorrupted by absolute power, I guess that works for everyone. In this country, our founders decided the best bet was to just keep the power to ourselves – we, the people. Trump is, in fact, the President of the United States, but he, like every other president, works for me. He is not “my president,” he is only president of my country. And he is only that because we say so, even if I didn’t. It’s been working for a good long while now, I’m not ready to try anarchy just yet.