View from the Top

An acquaintance whom I have not seen in a little while asked me last night, “How’s it going?” My canned, automatic response was, “Good, things are good.” But that response can usually be translated as nothing more than the exchange of pleasantries. No matter how “things” are actually “going,” my response would be the same. In fact, even if it was a real friend, not just an acquaintance, I would be compelled to keep whatever difficulties or triumphs I might be experiencing to myself. Last night it was different. For whatever reason, in a split-second I followed up with, “Really good. Everything in my life right now is clicking. I couldn’t be more content.” And I meant that. That is not to say that I have somehow “arrived,” that my life is so complete that I have nothing left to strive for. But in terms of my general mental state, I am truly, wholly, content. 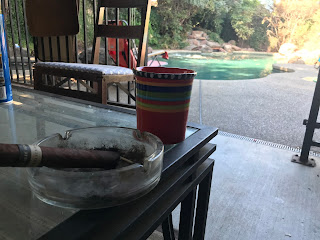 There are a number of reasons for this, some easily identified, some more elusive, and I am not so naïve to think that this state of peace will last until the end of my days. Another storm will come, and I will weather it, survive it, conquer it or succumb to it. It can be no other way. However, I am pretty confident that I have come to a place where I am able to make choices that will minimize, if not eliminate, the self-inflicted variety. Perhaps the most violent of the self-inflicted upheavals in my life occurred almost 17 years ago when my choices directly led to a wreck that nearly ended my life. That was the beginning of the end of one part of my life and the beginning of the beginning of this part. But it did not happen overnight. It was not as though I woke up in the hospital – five weeks later – and thought, “Fuck, that was close – I need to totally reevaluate my life.”

In terms of the direct cause-effect of that wreck, yes, I said to myself I’d never do that again (I did do it again, but with less severe consequences – for a “smart guy,” I can be pretty dumb). But by the time I left the hospital and embarked on a long-term physical rehabilitation, my mental, spiritual and social life returned to a status quo that could be and almost was fatal. But that lifestyle would prove unsustainable and eventually the instant self-gratification through chemistry I had become so used to rapidly spiraled to a singular point of “fuck this, I can’t do it anymore.” I got clean. I had to, but that undoing of years of daily doing was a process that took some time. “Drugs are bad” for those of us who become dependent upon them, but they are also our worst best friend.

Almost four years after my near-death, and after some intervention from the legal system, I managed to quit long term on August 6th, 2004. Those early days were a bitch, but with the help of a lot of people - some friends, my family and too many I will never know – I have been able to live a life that was beyond my conception. Happiness is nebulous term, it can be defined in a number of ways. At some point between my mid-teens and my late 30s, it became synonymous with being “high.” Today, my contentedness defines my happiness. Today, and for some time now, I am happy. I am at peace. That is not to say that I am always in some state of nirvana where nothing ever bothers me, that is impossible. But compared to the early years of this millennium especially, it is a state I find myself in regularly. It has become the new status quo.

Over the past two or three years, I have been gradually getting more open about my past to those who are not or were not part of “that” world. That was what hit me last night when I expanded upon my programmed response to what was not so much a serious inquiry as it was an equally canned greeting. Part of what my past life has given me is experience that allows me the ethos to speak on the topic. And what my life has been since getting clean is nothing short of amazing, but it is a delayed amazement. It took some time; transitioning one’s entire outlook on life is not an event, it is a process. Today I have a career and until I got to a place where I was totally comfortable with who I am, who I was and what I am doing here, I was reluctant to divulge too much. Being free to tell my story to whomever – professionally, socially, anywhere any time, is a product of the work I have done.

Those who know me or know who I am today through any number of the means I use to communicate know that I am currently a professor at a large public university in California. I am unique, my students see me as an out of the ordinary professor. Not many look the way I do, ride a Harley to work or conduct class as I do, but I look at it as just another element in the great diversity that is a hallmark of arguably one of the most diverse campuses in the world. When I got clean at 41 years-old, I was a high school graduate (barely) and a college drop-out. But like only a few others, I have an abundance of particular experiences; they are lessons on what not to do. But these stories are also means to communicate what I teach – communication.

In the process, I discovered that something I believed of myself for most of my life was not true. I felt that I was cursed with a deficiency of creativity. I felt that I was not gifted with any artistic talent. It turns out that was a lie. It is likely I would have discovered that lie much sooner had I not spent so much energy chasing ghosts. Through my return to college and in the pursuit of my graduate degrees, I found that I could weave words and punctuation into compelling stories. I have been complimented (something I still have a hard time accepting) on this gift many times. I also have found a great deal of pleasure in creating works like this, but of late, I have not written much more than an occasional Facebook rant, revelation, insight and the like. While I put care into those, too, it is not like this.

This kind of writing is cathartic. It is not as though I ever forget where I came from, or that I am ever not grateful, but inspiration is a fickle thing. I’d say that such is art, but I really don’t know. This morning, as I was perusing my usual go-to Internet sources – news, Facebook, Instagram, sometimes Twitter - I noticed that my girlfriend posted a reflection on her Wordpress blog. Her reflection dealt with, as is usually the case, gratitude. She is, in a word, amazing, and my relationship with her is among those things I just assumed I would never find. But this life we have chosen is what precipitates that and so much more. It took time, a lot of help and a lot of work. There is no “instant gratification.” Somewhere along the line, through the early struggles and the ups and downs of life, I decided that as hard as it was, it would be worth it. I guess you could call that faith. It is all part of what compelled me to elaborate last night. Things are good. Really good. Probably as good as they have ever been. I am content.
Posted by Michael K. Althouse at 1:03 PM

Thanks for sharing. I would like to share this with my son. I don't think has has the depth of issues that you had, but he definitely thinks going out with his buddies are more important than family or job. Maybe he could get some perspective by reading your story.

Feel free. Everything I write on this blog is public.