It has been long enough and regular enough. It has become a tradition for me. This time of year, for seven of the past nine and again this year, I have been in the midst of a multi-state, several thousand mile motorcycle ride. And for the sixth year in a row (leaving in less than two weeks)  that ride coincides with the Mecca of motorcycle rallies, Sturgis. Riding to Sturgis was not my first extended motorcycle ride, and riding 500 miles or more in a single day now feels like a walk in the park, but there was a time when that sort of adventure was intimidating as hell. 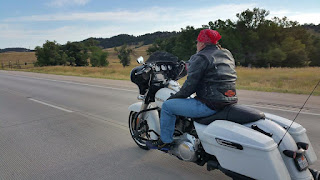 I’ve been riding street motorcycles since I turned 18 years old. But for much more than the 38 years since, the allure of riding on top of two wheels attached to a motor has been irresistible. Although my active participation in that life has ebbed and flowed with the realities and responsibilities of life, at this point in my life and for the past decade-plus, I have owned at least one Harley and ridden as much as I could. That changed somewhat when my son had a serious motorcycle wreck late last year (I no longer commute on my bike), but I still ride – a lot.

A huge part of the allure is an image burned into my memory from some time in the mid to late 60s. My family was traveling from our home in the Santa Clara Valley (now more infamously known as “Silicon Valley”) to Southern California in our 1966 Chevy Impala station wagon. Somewhere on CA-99 (before I-5 was built) a pack of black leather clad, long-haired bikers came roaring by us. The details of who they were and what they were riding were more than I could absorb at that age, but looking back it isn’t too difficult to put the pieces together. It was the “Easy Riders” era, they were likely Harleys and it was likely some club ride.

I didn’t see any of what so many attribute to “one percenters” or “outlaw” motorcycle clubs. And I am not here to defend them or slam them. I know enough to say that we don’t know everything, it is not like “Sons of Anarchy” and, that like all other stuff of legend, there is some truth in it. It would turn out that what I was attracted to had nothing to do with the “pack,” it had to do with the machine itself. It was and is both a tangible and intangible representation of freedom. The actual tactility of being one with the machine, directly encountering the elements and the flooding of all the senses are the physical manifestations of freedom; but the attraction of non-conformity, the personal and varied expressions in terms of appearance and the pride that comes from the confidence of giving the middle finger to “middle America” who so often condemn such expressions is equally compelling. That moment left an indelible impression on my psyche, but it did not create it. I was, shall we say, predisposed to rebellion. 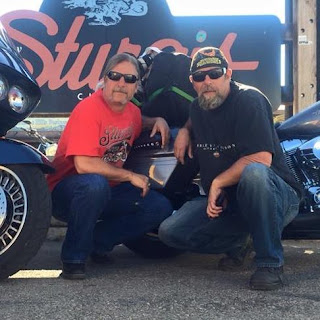 There are some people, probably a majority, who are okay with following establishment. There is nothing inherently wrong with “establishment” in the abstract – indeed, it is, by definition, established. However, simply because something is established, it does not necessarily follow that it is “good.” The truth of the goodness of most things established lies somewhere in the middle. The pendulum swings, slowly, back and forth along infinite planes – societal, social, fiscal, fashion, expression… ad nauseum – but it is the fringes that push it. We, the “bikers” (and artists, and adventurers, and other contextually, socially defined “extremists”) represent what is possible, what can be, because we live it.

Okay, I do not live it every day. In terms of attitude, my appearance, my transparency, sure, I live a non-conforming life. I, refreshingly these days, say what I mean and mean what I say. Interestingly, 25 years ago I would be viewed as even more extreme, based upon the “establishment” of the time. Such is the nature of pendulums. But I am also not some mid-life crisis “Wild Hog” or a “weekend warrior.” I still log around 20,000 motorcycle miles per year. That might sound like a lot, but it is on the low end for most “hard core” motorcyclists. I log most of my miles in the summer and most of those come in a relatively short period of time – my one long summer ride. However, in the interest of full-disclosure, my first trip to Sturgis in 2014 was not a ride. It was a drive and my motorcycle was on a trailer. While there are legitimate reasons why I could not ride, and although I thoroughly enjoyed myself anyway, I could not help but feel I had somehow betrayed myself. And I knew more than half of the experience is in the ride there – it’s the journey.

However, my street cred is not only solid, it doesn’t matter. We – all of us who push the edge, exist on the fringe and otherwise thumb our collective nose at convention are not doing it for recognition. We do it because we have to, it is who we are. Whether a “biker” (an establishment label that still does not sit well with me) or anyone else who is attracted to not just the edge, but what’s on the other side of it, we are the energy that moves that pendulum. We keep it interesting, stagnation fears us. That attraction I felt at five, six, seven years old? It was real and I never forgot it.

My university professors would be asking, “so what?” Where is the “so what?” I agree, it is time to get to the ultimate point in all this. I’ll do it with an example: 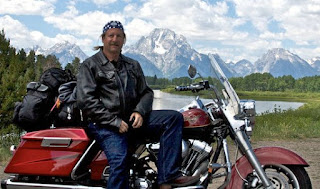 My first long ride on a motorcycle was planned for July of 2010. While I had several overnight - maybe two or three night – rides under my belt, this was the first really long one. There were many friends who were “going to go.” All but two of us dropped out for various reasons (maybe excuses). We were now looking at a daunting trip without the strength of numbers or any experience among us – neither if us had attempted anything like it before. The questions washed over me: What if I can’t handle it? What if my bike breaks down? What if it rains or even snows? What if I crash? It was almost enough to stop us. We both had sons in the Army fighting in Afghanistan at the time. We pushed past our fear (because that’s what it was) by comparing our journey to theirs. When put in those terms, we could not not go.

It was magical. We were gone 11 days, rode seven or eight of them, covered six states and almost 4,000 miles. I was finally living an extended version of the freedom I witnessed so many years before. It was eye-opening. Despite my non-conformity in many areas of my life, I was still unwittingly stifling myself, almost buckling under the crippling fear of “what if?” Since that trip, I’ve made many much longer rides – in terms of both distance and time – and although I have experienced my share of “what ifs,” they did not stop me. Ultimately only one “what if” ends it all, and it is the same for all of us. As far as we known, we only get one shot at this… why limit myself?