Video has changed the game. It, along with television, was the turning point in the civil rights movement. The technology brought visceral images to the nation, and to the world, of what was happening in “the land of the free.” There it was, right in our own living rooms. We knew about it, we heard about it, but for too many of us it was so far removed from our daily lives that we could turn a blind eye because we were, in fact, blind. No more. 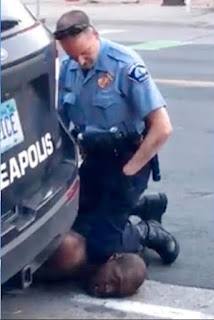 Fast forward to the early 90s when the technology finds its way into the hands of everyday people. Camcorders were becoming cheaper and easier to use and one of them was trained on some Los Angeles cops as they mercilessly beat Rodney King after arresting him. Although instant access to distribution channels was not yet available, the recording was aired by a local news station and it quickly went “viral.” People were, again, appalled. This sort of police brutality was nothing new, as those who were subjected to it knew all too well, and although we had heard of such things, we were, until the King beating, blissfully blind. The “system” failed to realize the outrage acquitting those cops would cause, but that, too, came right into our living rooms.

So, lesson learned, right? We had a problem. The “racial problems” were not a thing of the past, not an ugly and unpleasant footnote in our history, they were still there lurking under the surface in our institutions. Get to work, identify the cause, craft solutions and eliminate the source of the rage that was a tinder box waiting to ignite. And although some steps were taken, it is clear that we are nowhere near “there” yet. As the technology has become so advanced that video is everywhere, one would think that the very threat of getting caught would compel those who are prone to violate the rights of others to stop. It would be better if their actual attitudes changed, if those in positions of power did the right thing because it’s the right thing to do, but that is naïve. It is puzzling, however, that the risk of getting caught is not enough to keep these cops from exerting unwarranted and excessive force.

It might be that the risk is not that great. Time after time we see those who have been caught in the video cross-hairs sent home, free, with minimal or no consequences. Even in this most recent case, the Minneapolis police officer who killed George Floyd was not even arrested or charged until days later. No one except a cop would be afforded that kind of grace. And the other three who stood by and allowed it to happen? So far they have lost only their jobs, and the police union will, no doubt, fight that. Here we have a case where virtually everyone agrees that this was a cold-blooded heinous crime and yet the standard operating procedure that applies to all other criminals who perpetrate this type of crime did not apply. Why?

We have given the cops too much. Too much privacy. Too much secrecy. Too much power. Too much autonomy. We have also not demanded enough from them. Not enough training. Not enough screening. Not enough professionalism. Not enough empathy. Of course, even with all that taken into account, we cannot prevent an occasional rogue cop from slipping in under the radar, but at this point it is becoming increasingly clear that there are way too many and, more importantly, the rest are not policing those who are not upholding a level of trust necessary for police to be effective in any community.

I wrote a piece on Facebook recently in which I argued “there are no good cops.” The premise is based upon the mythical, magical “thin blue line,” that veil of secrecy that binds cops to silent solidarity. I got some push back, some resistance – I knew I would – and while I readily admit that not all cops are bad and that most are not “dirty,” far too many will look the other way. Derek Chauvin worked for the Minneapolis Police Department for 18 years. In that time he had 18 complaints made against him, only two of which incurred any disciplinary action –  “letters of reprimand.” It is actually remarkable that we even know that much, considering the privacy that police personnel records get. There is no indication where those complaints came from, but I’d bet real money that not one came from a fellow officer and, furthermore, I’d bet no fellow officers were particularly helpful in the investigation of those complaints. This is a major metropolitan police department, not the Podunk PD.

This is not an isolated case, it is the latest in a long line of police killings, brutality and other major indescretions that have been documented and in most cases, nothing happened – the officers were found not at fault. And those who were still got special treatment. But wait, this is only the tip of the iceberg – these are only the cases that happened to find their way onto video and into the public domain. With that many that happened to find themselves on camera, just imagine those that have been summarily swept under the rug and behind the veil of a blue curtain – beyond public reach. Is it any wonder people are angry. I am white, male and have seen it myself, experienced it myself, been lied about in police reports myself. I have black friends who have stories that are far worse.

There is so much wrong and so much work to do, but if we don’t focus on law enforcement as a priority, nothing else will matter. The trust that the police must have to do their job does not exist. God cops, good cops that don’t say anything about bad cops and bad cops all look the same. There are no white hats and black hats to tell them apart – I have no idea who I’m going to get when I call them, so I won’t unless it’s is absolutely necessary. That is the reality. The unrest, the anger, the dismay, the disillusionment, the distrust did not come out of a vacuum. The uprising on a national level is not some orchestrated, coordinated ploy by those trying to destroy this nation. It is organic. It is the natural extension of what happens when too many people are denied too long the freedom that this very nation promised them.