The last time I saw the Eagles, I told myself it would be the last time. They put on an excellent show, they are one of my favorite bands, but I've seen them a few times over the years, and they are expensive. But that was before the show. After the show - the first of two nights at the COVID rescheduled shows at Chase Center in San Francisco, I posted the following to my Fakebook timeline: 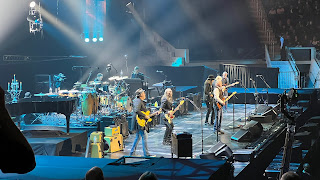 This post is a departure from dogs, motorcycles and cigars, not the first one and not that last, but it is does run along the same theme of innocuousness. There is nothing disagreeable, controversial, adversarial, or, in the grander scheme of things, particularly important contained here. On the other hand, one could argue (I would) that nothing is more important than these small day-to-day , pleasures, victories, connections and the like. So, that’s a lot to set up this. If you’re still with me, cool. If you’re not, you have probably just skipped down to the pretty pictures and “liked” away. Also, cool.
Last night, the Eagles performed the first of their two nights at the Chase Center in San Francisco. This is the Hotel California/Greatest Hits Tour that was postponed for more than a year because of COVID. I’ll cut right to the, um… “chase” and go ahead and say that it was worth the wait. Since reforming after Glenn Frey’s passing, I’ve seen them three times - their first show in LA at the Classic West in 2017, again on their next tour in Sacramento at the G1C in 2018 and last night. All were quintessential Eagles performances, but last night was easily their best - before or after Glenn Frey’s untimely death, and prior, I’d say their best tour was their last with him, the “History of the Tour.” 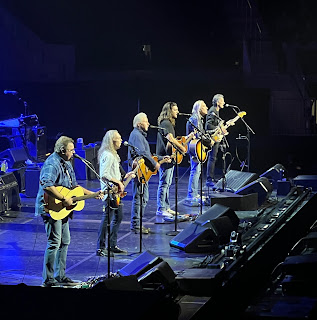 Between Vince Gill and Frey’s son, Deacon, the elder Frey’s role is not recreated, it is reinvented, but in a way that pays homage to his legacy and, through his son, absolutely in his image. Yet, it was last night that the entire band, as good as it was right from the start, really came together in “that” way that few groups ever do, in the way the Eagles (almost) always have - and now they have again. There was magic on that stage. There was chemistry. Maybe it was alchemy, but whatever you want to call it, this band was truly enjoying their night, and their genuine appreciation for their fans’ - not just last night, but for more than 50 years - revealed an authenticity that cannot be faked.
I told myself this would be my last Eagles concert. While they are one of my favorite groups, I’ve seen them a lot - enough, I figured - and they are an expensive production. However, maybe this was not my last Eagles concert. At the conclusion of the fourth encore song (that’s right, Sacramento, we got four - Henley’s “Boys of Summer” was included in the SF encore set), I toyed, briefly, with the idea of going back tonight. I won’t, but when the next tour comes around - because I seriously doubt they are done - you might just find me back in the stands.
Cue the music… 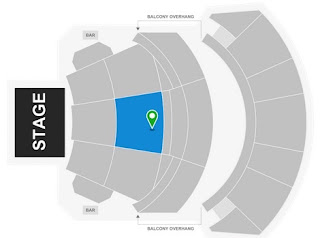 I have tickets right smack-dab in the center of the 202 section in the new 4,500 seat venue (named, originally enough, "The Venue") at the Thunder Valley Casino in Lincoln, CA. They are in the center of the center and close, closer than I was at the Chase, at The Golden 1 Center in Sacramento in 2018 and way closer than the band's resurrection after the passing of Glenn Frey for the Classic West festival at Dodger Stadium in 2017 or the seats I had as a broke-ass grad student in Louisiana when I saw them in New Orleans for the "History of" tour in 2014.

These tickets were close to $500 each (including all the bullshit Ticketmaster fees), comparable to the price of the seats I bought for both the Chase Center show last year and the G1C show in 2018. Were they "worth it?" That's a tough question to answer. If I had to put it on a credit card and I was paying those tickets off over the next few months (been there, done that - never again), then, no, it's not. But If I have disposable cash, then I decide what to dispose it on - sometimes I might "waste it" on motorcycle parts, others it might be an Eagles concert.

None of this means I will for sure use these tickets. I bought them because I could, knowing the investment is safe (-ish; I thought that about the pre-Covid Chase Center purchase, too - then Covid happened and I lost money on my "investment" extra tickets). They made selling the tickets a little more difficult by sending out actual, physical tickets in the mail - if I sell, it will be a real, not virtual, transaction. But that is only stupid Ticketmaster bullshit, not an insurmountable problem. And at least Ticketmaster won't get a double-cut that way. But I didn't "need" the money I spent and I don't "need" to double or triple it, either. However, I will get that if I sell them as a pair (no "friend deals," don't ask), that's the payoff for the investment and the risk I took.

But I also might go. What I wrote a year ago - combined with the fact that seeing the Eagles in a one-off small venue setting is not likely to happen again soon - is pretty compelling. I mean, I can be pretty convincing. If I do go, that will leave open one important question. Fortunately, I have, literally, months to decide.