It’s 8:30 a.m., Sunday morning. The temperature is around 40 degrees and everything is wet outside. It rained pretty good last night in California’s Central Valley, which means it snowed pretty good in the Sierras. I love the snow. I always have. It has an ethereal quality. Everything looks fresh and pristine when covered by a fresh blanket of snow. A foot or two of new snow has a quieting effect… Everything is brand new. 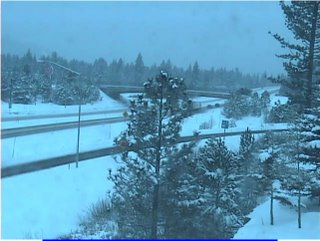 There are numerous web cams in the mountains. In the winter, especially during or just after a storm, I’ll check some just to see what I am missing out on living well below the snow line. Even though this is a cold storm and the snow level came down below 2000 feet last night, it is still about 1500 feet above me. I miss living in the mountains – I miss almost everything about it. What I miss the most, however, is the snow.

The winter snows provide a variety of practical benefits. The snow pack represents the water reserves for much of California. It’s like an annual savings account for the state’s summer water needs. This year, we’re going to be all right. It provides any number of winter sports opportunities and the associated tourism. Although the income from tourism drives the local economy, anyone who has lived in a tourist town can attest to the headaches that come with those dollars.

The snow does more than ensure water, generate income or give those winter sports enthusiasts a place to spend their money. It is an attitude. It is Mother Nature taking over and showing us just how insignificant we are. Despite the more than competent efforts of those professionals who deal with the ramifications of every big storm that passes through, there comes a point where the best they can do is wait.

The snow is a great equalizer. It affects everyone in much the same way. It is paralyzing, calming, quieting – it squelches any real movement, it slows everything down. This does not sit well with everyone, especially those who are not used to it. The tourists that come up from the Central and Silicon Valley – the “flatlanders” – are not used to being still. It’s all go go go, and many can find no peace. The moment is passing them by, for if not sufficiently respected and appreciated, the snow is nothing more than just another pain in the...

I think that many of us tend to forget that, as advanced as we are, there is so much greater power than we can even hope to duplicate or control. If a blizzard doesn’t do it for you, try the ocean, especially during a storm. Its power is simply awesome. Try to stop a wave – think of anything that can? When push comes to shove, Mother Nature always wins. Always.

Many of the various natural phenomena are referred to as natural disasters. I beg to differ. They are only disasters when we are in the way. Yes, they’re disasters – human disasters and heart wrenching in that respect, but the planet is simply doing what it is designed to do. And we can’t stop it. And no… God is not punishing anyone. When the planet was formed, it was a very inhospitable place. Through it’s changes over billions of years, it has evolved into a place that not only supports life, but allows it to thrive. Who are we to fight it?
Posted by Michael K. Althouse at 9:12 AM

It doesn't snow down here but we are in what is known as Saddleback Valley and on rare occassions (like now) Saddleback Mountain gets snow. It's so pretty.

No snow here to speak of, except the blizzard of March '93. We may have gotten a few dustings here and there, but for the most part we usually end up with a mild winter... like this year. We are already into 70's and possibly 80's tomorrow. Yay! I love the spring, flowers and all the color I can get. I'm so over the brown of winter.

I moved down to Atlanta from New Hampshire in '83 during a blizzard, and was only too happy to leave it all behind me. However, you make it all sound so nice on your post, that I can appreciate it's beauty without actually having to trudge through it.

I agree that snow is beautiful and it does have a calming nature to it. My problem with it is the fact that it has to be COLD to snow. My body just refuses to function properly when it is COLD. No matter how I bundle up the COLD seems to penetrate me to the core. My joints lock up, my muscles tighten, I get severe tension headaches. Anything below 70 degrees and I start layering clothes. Anything below 50 and I am miserable. So send me all the pictures you wish of snow and I will enjoy them from my warm house.

I do agree with your viewpoints on nature just doing what it was designed to do. To bad not everyone else sees it that way.

I just got home from dinner at the in-laws and it was a "white knuckle" drive back since it was snowing like the dickens outside.
It was rather scary but you get used to it.
We've had snow on and off for a few days now.

I used to live in Tahoe right out of high school in '72-'73ish. I loved the snow and do miss it. I remember the crunch my shoes would make while walking on it...Thanks for making me think of it.

I think snow is beautiful and awesome, too..specially when it's that heavy kind of snow that builds up on roofs and on branches of trees..You know what I mean? But..I coul not live in it anymore because of how cold winter gets...I can always take out some of my old pictures or someone elses, for that matter and enjoy looking at the snow that way...but, no more dealing with it if I can help it! Been there, done that and I'll take the warmth over that cold any day...
I agree that nature is just being nature and it really is a good thing to respect it, I think...You know how I feel about the ocean...it's awesome and amazing, too...

Isn't it interesting how some people just can't stand not having control over the weather...or the tides or even the moon....!

I know Hurricanes can be trecherous and Tsunami's...Oy Vey! And I don't wish for any more people to be homeless because of these things, or worse, to loose loved ones or even their own lives...I guess it's what you said, we get in the way...But, how do you not? How do we get out of the way of nature or even stay out of the way....I hate that sometimes there isn't even a warning with certain natural happenings...Tornedo's...

You certainly provoke lots of thoughts Mike..and even though I scared myself, I like that, too! Thanks! (lol)

That's the great thing about California. You can drive up, experience the winter weather then roll back down into more moderate temps.

Being in southern California, the hail and cold temperatures we have been experiencing these past few days are indeed a dramatic change from what we are accostumed to here this time of year.

That being said, let us enjoy the differences, in the moment, rather than try to figure out what they are mean.

Ahhhhh, mountain cams and snow. Are you trying to seduce me? ;-) I come by the voyeur moniker because of those cams. Thanks for adding more to my list to visit. I LOVE THE SNOW!! I love the quiet, the slowness, the cleanness. It feels almost holy to me to be in the midst of heavy snow with no one else around. It's also why I enjoy cross country skiing, to get to pristine, quiet places with no one else around and just enjoy the beauty of it. I long to return to the mountains, but my baby loves the beaches. *sigh* She's good to me though and I get mountain "fixes" a couple times a year. But retirement is coming baby!!! Gonna git me a mountain shack by a lake and settle in. *bliss*

I'm a fan of snow for the first two months of winter....but around now I despise it. I just want spring and beautiful flowers! It's raining right now...so at least some of it is melting. Everything just looks so gloomy....some areas with huge, dirty snowbanks, others with muddy ground. The wonder that is March in Montreal.

Ewwwww. I hate snow. Give me a nice rainstorm any day, though.

barbara ~ They predicted that it may snow in Sac, but it only got down to about 700 feet. I'll be going up to Truckee this week - they got feet up there.

ellen ~ We had our indian summer here a few weeks ago. That's when I blogged about riding my harley. It'll be back soon enough... right now I'm in limbo, wet and cold AND no snow.

neal ~ the cold affects my body too sometimes, especially the hardware in it! It doesn't dominish the effect though.

sadie lou ~ yes, it's been all over the news. How exciting!

ktdid ~ That's right - the crunching of the snow - I forgot about that.

ultimate ~ so true, I have been jet skiing and snowboarding in the same day!

bfc ~ Indeed, enjoying the moment means I don't miss it by trying to figure it out.

VV ~ This is one of my favorite webcams - it has links to many others and, on rare occasions, I'll see someone I know drive by!

oilf ~ Ya, if I were living in it, I may be getting tired of it too.

saur ~ Rain is cool too, especially a big ole thunderstorm. weather of any kind can be awesome.