Rider in the Sky

My mom is not going to like this post. I doubt very much that my dad will either, but I am somewhat obligated by circumstance…

There are things in life that are inherently dangerous. Hang gliding, playing football, even crossing the street can be viewed as dangerous. Sure there are different levels of risk involved and everything is relative, but life itself is a risky endeavor. And one thing we all share is our ultimate demise - sooner or later. Riding a motorcycle is among those activities that most would label as dangerous. It’s not for everyone, even for those who are not normally averse to personal risk-taking.

I have been riding a motorcycle on and off since 1982. I have had my share of close calls. And though it seems as if there are more motorcycles on the road today, the great danger is still largely out of the rider’s control. Cars and their drivers can and often do look right through an approaching motorcycle as though it’s not even there - and then proceed accordingly… right into our paths. When I was younger, I didn’t believe that cars were the problem. Rather I believed that by pushing my capabilities as well as those of my machine, I was the primary source of danger… that and a little loose gravel on a twisty mountain road.

And perhaps I was not too far off the mark; maybe I was just lucky to live through those years. But I don’t ride that way anymore. Yet I am still acutely aware of the external danger that still exists - cars. Although when I ride I am always on the lookout for inattentive motorists, I can’t possibly drive for everyone. There has to be a certain amount of faith that my abilities combined with some degree of good fortune will keep me safe. So far, so good - and I log more miles today that I ever have. Furthermore, I ride with equally skilled and attentive riders, some of which have had closer calls than I. But the risk still remains.

On Sunday night one of those friends I sometimes ride with - a skilled and attentive rider - was taken down by a careless motorist. I have heard talk that the driver was drunk, but I don’t know and at this point it really doesn’t much matter. Just a few hours ago he succumbed to his 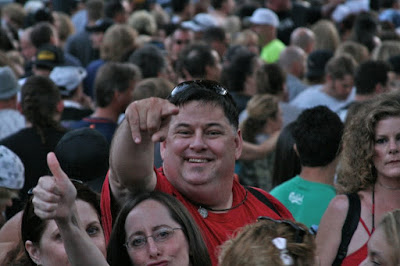 injuries. He was just too broken up. Big Mike was only 46 years old. I saw him just prior to the accident, a commanding presence in any room. He was an extremely talented musician - a giant of a man both figuratively and literally. He loved life and he loved to ride. He shared recently that his mother did not like his motorcycle - likely for the same reason my mother doesn’t like mine - but he pointed out that as an adult he could make that decision (and by inference, other dangerous decisions) for himself.

Unfortunately his mother’s worst fears came to pass. But hopefully she will realize, as we all should, that he was living his life. He was extracting fulfillment from it in a way that perhaps many cannot understand. Life is full of risks and no one wants to live in a bubble. I know that when his motorcycle was in the shop recently, he longed to ride and when he got it back he had a smile a mile wide. Motorcycle riding is not for everyone, but neither is jumping from a bridge with a rubber band tied to your ankles, neither is being a cop or a soldier in Iraq, but for some these are the things that make us feel alive. In some small sense at least, isn’t that what life is all about?

Ride on brother, ride on…
Posted by Michael K. Althouse at 1:04 AM

Thank you Mike. I will always remember the gusto Mike poured into most of what he did, singing, NA service and riding are but just a few. I am so taken with grief and am comforted by your words...sometimes Mike and I would talk about, well, we've actually pictured something very much like this. SHIT I am so sad

I think you know my feelings on them. I lost a favorite cousin on a bike, due to a drunk driver.

wow...i cannot believe this...mike i love you brother...rip and ill see ya soon..

Your entry brought tears. Rest in Peace! Here from Michelle's... and I'll be back!

Thank You Mike that was very heartfelt and i needed to read that. You know when I didn't have anywhere to go Mike put me on his couch when nobody else would and I thanked him every day for that. I'm gonna miss him and I'm still gonna tell him every day thank you big Mike for taking me in. For helping me. Mike had the biggest heart ever and made that sure everyone knew. So in ending Mike A. thank you very much for being a good friend and very very good Writer. Love ya Bro
Tennecee

What a wonderful tribute to your friend. Sounds like he lived life his way, and although too short, it was full.

I am so sorry for your loss of a great friend and comrade of the riding road. Yes, we all know the risks, but our love for the ride overtakes it and our love for life rides the road we choose. Here's to your new Asphalt Angel--Big Mike. May he ride the Heavens full throttle overlooking you and those he loved on this planet.

so sorry for the loss of big mike. i have some pretty strong feelings about this, as a high school classmate was killed by a drunk driver while she rode her motorcycle. she was 17 years old. ever since then i've understood the rider is gambling every time he rides. i guess it's okay to take the risk, as long as the rider doesn't have children to take care of. parents and friends all grieve something fierce, but children should not have to lose a parent to a reckless hobby. i hope he didn't have kids...

Losing a loved one sucks. Whether it is quick from an accident, or over time from an illness, the pain is the same. I will say a prayer for Mike and his family.

I am actually reading this today because my current trip is on a little hiatus due to a windy mountain road and A LOT of loose gravel. I am lucky, my knee is not, but a weeks rest and Ill be going again. I am not telling my mother about this until I am back home, she thinks Im just enjoying the last days of Turkey.

I am so sorry to hear about your friend, but I love what you wrote. I think all drivers know the risks we take when we get on the bike. And those are feelings I have tried to put into words to everyone who tells me how dangerous it is. its not for everyone, but its something I love. And I will get back on the bike and not stop. I know the risks, but I prefer to take them. Some people do. And it is our choice.

An amazing tribute to your friend, and all riders.

He will be in my thoughts and prayers tonight.

wonderful post and a lovely tribute filled with passion and honesty.

it seems trite to tell you why i came over, but i will anyway. i tagged you for a game (over at my place). if you want to participate (i usually don't) feel free.

thanks for the reality check.

I feel for you and your friends family man. I raise my glass to Big Mike's memory, let him ride free for ever.

Sorry you had to lose a good friend n person that way!
Living on our own terms is what makes us free.

I've seen so many cars almost wipe-over bikes around here it's horrible.