I don’t remember when, exactly, it was. Probably sometime in the mid to late sixties, something happened. Enchanting is probably not the right word, but it was captivating all the same. It was multi-sensory – I could see it; I could hear it; but most importantly, I could feel it. It was the mystique of the motorcycle. I was infected and although its calling laid and waited for years and years, ultimately there was little I could do to resist its draw.

Although my first experience with two wheels and a motor was in the seventies on a Honda Trail 50 (street legal, but hardly a motorcycle), I have been riding real motorcycles since 1981. And though this column is about the freedom motorcycles represent generally, it is more about a specific genre that originally grabbed me and refused to let go. I don’t remember the specifics of that first motorcycle memory, but I do remember the sound; the visual memory is fuzzy at best, but I do remember the freedom; and although I can’t say where or when it took place, or what the weather was like, or even who else was there… it’s was a feeling that I now know and recognize so very well.

In the sixties, the U.S. car and motorcycle industry contributed to the bulk of the vehicles on the road. Specifically, the Japanese imports were not yet all that common and most of the imported vehicles came from Europe. As far as motorcycles were concerned, that meant Triumph, Norton, BMW and a handful of others were present in the United States. Harley Davidson was the lone survivor of the U.S. motorcycle manufacturers, but all of these early motorcycles on American roads at the time carried with them the same mystique – and the same characteristic presence:

It seems today that there are two very large and somewhat overlapping general categories of bikes – or perhaps, two types of bikers. I personally discount the degree of difference among motorcyclists generally – we are all answering the same call. But how we answer it is a different matter altogether. There are those who crave the fluid lines and high-revving street racers, and there are those who answer it with the classics. We ride the modern day equivalents of those bikes produced in days gone by. We remember that feeling when a pack of Harleys passed us in Mom and Dad’s 1966 Impala station wagon – seeing them come up from the back window as we sat in the “way back,” we could feel it through the stamped sheet metal as they passed on the left, and we heard the sound fade as they experienced a freedom I could not yet know.

Since 1981, that experience has been mine, but more recently, I have created it on my own Harley. Every bike I 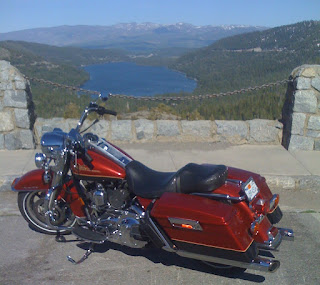 have ever owned was “going to be a Harley,” but for a variety of reasons (often, but not always, cost) it did not come to pass. My last two bikes did not fall to the same repetition – I would settle for nothing less. My current ride, a 2007 FLHR (Road King Standard) is big, it’s loud and it has a presence – a big presence. It is similar in design to Harleys built generations ago, but also incorporates the modern technology available today. It is, in a word, freedom.

Yesterday, the Sunday before Memorial Day (which makes today, of course, Memorial Day), five of us decided to take a day trip around Lake Tahoe. We met for breakfast in Citrus Heights (near Sacramento, CA) at 8:30 a.m. and hit the road an hour later. There was a chill in the morning, but as the day wore on, layers of cold weather gear were stripped and stored. We stayed off the Interstate as much as possible, opting instead to take Highway 20 and Old Highway 40 as alternatives.

By the time we crested Brockway Summit on Highway 267 (linking Truckee and Tahoe’s North Shore), there was little question as to why we do what we do. Even without the glorious panoramic view of Lake Tahoe (one that I have seen thousands of times, but every time it’s like seeing it for the first time), the calming peace… the solitude one feels even when riding with others… that feeling of freedom I experience through my machine and the world was potent.

We continued around the Nevada side of the lake and stopped for lunch at Harrah’s Hotel and Casino before continuing our journey up U.S. 50 and back to Sacramento. In all, we logged about 250 high quality miles for no other reason than that feeling of freedom expressed through our machines. Of course, when riding with good friends, that experience, as individual as it may be, is shared. Although the mystique is marked, in part, by solitude, it is also enhanced through our shared experience – through fellowship. It is, in the moment, all there is.
Posted by Michael K. Althouse at 11:36 AM