LAWTON, Okla. - I have had, in my middle-aged life, occasion to visit many of the states in this great nation. I have been to points north, east, south and, of course, I was born and raised in California. My family heritage, as far as the U.S. is concerned, is equally varied; my mother is an Oklahoma native, my father was born in New York. But oddly enough I have not yet visited the two states where my parents were born – not until one was knocked off the list yesterday. My youngest son just completed his Army basic training at Fort Sill in Lawton, Okla. and I came here to be a part of this seminal moment. 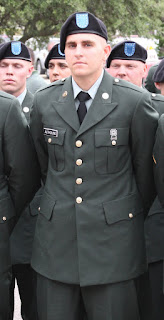 Over the years, I have not heard a great deal of positive affirmations regarding this state. Sure, college football is huge and there are prestigious universities, but as far as a place to live… well, it just doesn’t receive the highest marks. I do not say this without some degree of direct recount - remember, my mother grew up here. And although my visit here will be far too brief to make any kind of educated personal assessment, my recollection regarding my stay will be exceedingly positive due to the nature of the journey.

Military service in my immediate ancestral family has skipped a generation. My grandfather served, my father served, but I did not. The reasons are as much personal as they are political, both circumstantial and societal… reasons that in large part still exist today, though perhaps not as pronounced. When my youngest son approached me about joining the Army, I was a little taken aback, but not entirely surprised. Additionally, the personal reasons I had for not joining myself have been tempered with the wisdom of time, my mind much more open, the benefits far more visible. The long and the short of it is that military service is once again an integral part of my immediate family.

And I couldn’t be prouder. Although I supported his decision from the start and his departure for basic training had a surprisingly profound effect on me, after today’s graduation ceremony, I am truly connected. That’s not to say that I am somehow more patriotic, or that now I support our troops even more – I don’t think it is possible to further expand those sentiments, but I am now personally – very personally – connected to someone who has given his word to protect and defend the Constitution of the United States. He has joined the ranks of just a very few who have chosen to protect the freedom of so very many.

All graduations are special. They all celebrate the accomplishment of something big, something not just anybody can do. I have attended several and earned the right to participate in a handful. This one was different. This one meant something greater than the sum of its parts. This one ushers brave young men and women into an uncertain world with solemn dedication – and honor. You could see it in their steely eyes; you could feel it in their collective, unified voice. They are rightfully proud of their accomplishments and will march confidently onto the path ahead.

Oklahoma isn’t so bad. True, the weather isn’t great; the scenery is base; but the people I have met are friendly enough… and the Army is here. Oklahoma will forever have a place in my heart and my respect for its part in creating the experience that has made my son a soldier. There is no more honorable profession than that of a soldier and Oklahoma is a fine place to embark on this journey. Mere words can never describe the pride I feel right now and Oklahoma will always be a part of that.
Posted by Michael K. Althouse at 4:39 PM

left me with a smile on my face.
congrats to you and your son! :) what a wonderful way to remember Oklahoma.

Even I feel proud of him and I am one who would be way taken back if my sons chose the military. And I feel better knowing our government is now being led by someone who I don't beleive with manufacture reasons for preemptive wars. Netchick says hi.

Godspeed for your son's safety. I agree that our soldiers are some of the most honourable members of our society. Unfortunately throughout history, they have been sent into battle for causes that benefit those who do not fight and will profit from conflict.
I have always thought that our country( Here in Canada, but the same would apply to America, or anywhere else) would be better if the criminals were sent to battle and those who would be soldiers would stay home to build their community and Country.

You've always had a wonderful way with words Mikey. My mother was also from Oklahoma (Guthrie), she never had nothing nice to say about it but it was her home. I'm so very proud of you and Matt! We love you guys..

Congratulations!! Tany sent me over to read your post, it was a pleasure.
Have a wonderful weekend.

I found your blog thanks to a friend, and I'm glad I did. I enjoyed reading your post concerning your son's graduation and your memories and feelings regarding Oklahoma. I will definitely be returning in the future to read more of your work.