I can’t say I remember the first time I visited Lake Tahoe – I know I was very young. And I can’t recall with any separate specificity the thousands of times I have seen her since, but one underlying characteristic of each occurrence is her utter magnificence. It is breathtaking each and every time. Winter, summer, spring or fall… it does not matter, the majesty of the lake transcends all else. When I lived in the nearby town of Truckee for several years, I would often travel Highway 267 from Truckee to Tahoe’s north shore. Cresting Brockway Summit, the grandeur of this “Jewel of the Sierra” replaces all other realities, if only for an instant. 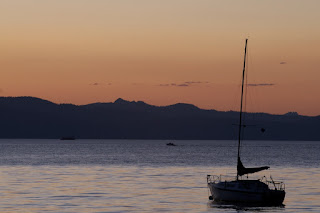 It has a meditative quality. The overwhelming beauty of this pristine lake can quiet one’s mind, almost as though her silent dominance supersedes whatever conflict or confusion might be going through my head. Gazing out over the lake’s south shore on this beautiful early summer morning, I am afforded the opportunity to escape the minutia and refocus on the big picture – both literally and figuratively. I am not speaking in terms of my own long-term goals, dreams and aspirations – the real big picture is much larger than that. But it eventually comes down to the few years I have to experience the world and what that means.

Lake Tahoe, or at least the area surrounding the lake, has changed dramatically in just less than 200 years. There used to be a lake, some Native Americans, forest and wild life. There were no houses or roads or “infrastructure.” No casinos. All of that is relatively recent, yet no one alive today was witness to those unspoiled times. But despite all of this “civilization,” the lake endures. She was here long before me and will be long after I am gone – perhaps long after humans are gone. Although concerns of sullying the lake’s legendary clarity are valid, the fact remains that we are of little significance to her… she can and will wait us out.

And maybe it is, in part, that enduring power that I am tapping into. It is humbling. While quietly contemplating, my phone rang with an email alert. Although the trappings of the modern world invaded my solitude, I was not compelled to immediately break my connection with nature. When I finally did read the alert, it eerily dovetailed into my thoughts. Farrah Fawcett lost her battle with cancer; she is dead. Yesterday, Ed McMahon died. (Newsbreak: Michael Jackson – also dead). Someday, we all will die. And though I don’t often dwell on mortality, from time to time it tends to put some things into perspective. I last wrote about moments – how the hustle and bustle of everyday life can sometimes overshadow what is really important.

The funny thing about time is that there is really only one time – now. It is at once fleeting, permanent and continuous; both limited and endless. The question is what we do with our time while we’re here. As morbid as this might sound, it is not about dying, but rather about living. Although I have often felt as though I have “wasted” my time, I am not at all sure this perspective is the truth and it certainly doesn’t serve me. My experience has made me who I am and none of it – even those moments of solitude – exist in isolation. Every second of every minute for every one of my 46 plus years have occurred in the vast matrix of human experience.

Although there are a few (very few) who have left a lasting legacy, most of us will eventually fade from memory. Most of those we have touched and will touch will pass from memory as well. And it is probably safe to say that many (myself included) rarely give it any thought. Even this grand lake will eventually succumb to the forces of nature – as will the planet, the solar system and, eons from now, the Universe. I don’t know what lies beyond and despite their sincerest beliefs, no one else does either. Regardless, that time has not yet come – it is not now. It is important to remember how our lives affect others not tomorrow or years from now or after we’re gone, but now – right now.

Even this eternally majestic lake exists only a moment at a time... and that moment is now.
Posted by Michael K. Althouse at 9:26 AM