I don’t really want to write this. I don’t really want to write at all. And truth be told, that's usually the case. Writing (pretty much anything), for me, is an act of exposing part of myself. It is never comfortable, but always worth it in the end. It just feels that the end is so very far away sometimes. Not in terms of the number of words or pages, but in terms of just how in the world I will get what I want to say out so that it says what I mean. When that consists of writing longer academic pieces, it is more about organizational logistics than anything else; but when it is what I am working up to right now, that is an entirely different story. But this story is the same story, just another year later. I first told this story in January 2006 when I wrote a piece entitled “Five Years.” In October the same year I wrote “Six Years” and in October 2007 it was “Seven Years.” Although the story was recounted in other ways in 2008, there was no anniversary edition, per se. But this year the series resumes with this predictably titled piece.

Nine years represents a little less than 20% of my entire life. That may or may not seem like a lot, but the truth is that some of my best days and most of my worst have taken place in this one segment. Nine years ago I was approaching my 38th birthday... I almost didn’t make it. Nine years ago today my life nearly came to an end and, though I survived what should have been by all accounts a fatal auto wreck, there were days early on that I almost wished I had not. But those days did not materialize until I awoke from a medically induced "coma" five weeks later; until then the nightmare was not mine, but my family's. To say I was confused when I woke up would be an understatement, but some things were unavoidably obvious. I could not talk, walk, eat… I was totally dependent upon others for everything. I was a mess. 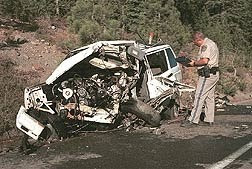 My injuries included an open pelvic fracture, multiple fractures to my left femur, a lacerated kidney, liver and femoral artery. By the time the life-flight helicopter landed at Washoe Medical Center in Reno, Nev., I had already taken 16 units of blood – I was loosing it as fast as they were putting it in. Of course, I didn’t learn of any of this until weeks later, I recount it here only to place the magnitude of my situation into perspective. I wrote extensively in those past pieces about the early days of hospitalization, recovery and rehabilitation. I will summarize it here by saying that other than a small collection of very large scars and a rod in my femur, nine years later I am about 97% recovered – and that is about as good as it’s going to get. It is way more than good enough.

This year I will attempt to boil down what my life looked like before and after that fateful day, October 17, 2000. I was living in beautiful Truckee, Calif. I had one of the best jobs of my life – I had independence and a large degree of control. And I was successful – maybe too successful. Over the years, a number of serendipitous opportunities just seemed to fall into my lap. This job was the most recent instance of fortune smiling upon me. Each time a new opportunity presented itself, I was aglow with good intentions. But eventually, and every time, the flame went out. It was no longer good fortune – it was entitlement. I always wound up just coasting... to the end. Little did I know that there is only and forever just one “end.” I almost got there, too.

In the hospital and for a long time afterward, serendipity once again graced me – I was given a great deal of time. Not more time to live my life, although I got that, too, but time in those many, many days to think about not only what life was all about, but what my life was all about. It took all that time and more as I’m still thinking about it nine years later. I hope I never stop. Although I don’t have a definitive answer (that is, I don’t know exactly what I am doing here), I do have a more general idea. I used to think in terms of what the world held for me whereas now I think in terms of what I have for the world – or perhaps for humanity. It seems like such a simple shift in perspective, but it took nearly losing it all and then some before I realized it.

I’m not saying that it was all about me prior. I had concern for others, chipped in from time to time, but in the end the value of my life was measured by comfort. My comfort. Now comfort is a byproduct. Writing these words is not comfortable, but I do believe they are contributing something to humanity. When I am done, it will likely bring me a degree of comfort – and it has nothing to do with a cushy chair or a nice car or a “significant” other. It has to do with peace. I have added something to the world and maybe - just maybe - that’s why I’m here.
Posted by Michael K. Althouse at 12:01 AM

Amazing! Mike, What an accident and I am sure you thank your stars every day for getting you through it!
Sometimes, we (I) take things too much for granted, it takes something like this to knock some sense into us. Thanks for posting.
Netchick sent me.

A very compelling account. I especially like the line about your change in perspective, looking at life not for what it offered you but for what you could offer it.

In 2001 I lost two brothers under tragic circumstances a month a part and I was with one when he went. That was the life changing event that changed my perspective to one in which I really do know that life is impermanent and how little we really know about it and about death.

I think I'm a better person for having gone through it but it was a rude and painful awakening.

I've been coming here now and then almost since you started this Blog Mike; have read those accounts when they were new. We are all part of a chain with one small link leading to another small link. You survived because your own small links need you to become who they are for without you nobody knows what would have become of them. They would have been changed from who they are now because of you and who you are had you not been there. Though I can't see it in myself I can in you in that those children are your purpose, the reason you survived, the reason no longer has to be wondered about or searched for any farther, all you have to do is get a phone call or look at the wall where those pictures are to know the reason. It's right there in front of you but like most of us...we can't see the forest for the trees.

wow... and all I wrote about was cars and bras! =p

Omg you are lucky! Clearly it wasnt your time AND there probably was a bigger purpose for your being here!

Reading this made me feel very self centered. I know there is more that I should be doing. I really have know it all of my life... but I am a procrastinator and fear has a hold over me as well... so I, like you before your accident, coast through life. I dont think that it is a good way to get through. Its easy, but not fulfilling.

Thank you for sharing your story AND for stopping in to say hello... even though it was the title of the post that got you (I am not in marketing by accident *wink).

Mike, thanks for sharing. You're one of the lucky ones, who not only had that moment that awakened awareness, but also one who chose to follow that different perspective. Some people get there in an instant with a life changing event such as near death, or the death of a loved one. Others of us get there after a series of horrific life events that the universe is patient enough to keep sending our way until we get the message. "Oh, it's not all about poor me, oh, I have a purpose here and I'm supposed to be doing more than just sucking air, resources and taking up space?" :-)

I remember the first time I learned of this October anniversary of yours- it never ceases to amaze me how far you've come from that!
We no doubt have much to learn from the re-birth that took place in your attitude.

I cam across you blog throug VV or Vancouver Voyeur and so enjoy reading your posts, you are a very talented writer. You post about the accident gave me the chills. The fact that you need to write also, for the need to "heal." I had a daughter died and blogging made me come back to writing which was something I gave up when she died. All I could write was WHY ME, WHY HER, etc. So blogging has helped me use my brain again ... well a little!! Nice site!! Maeve