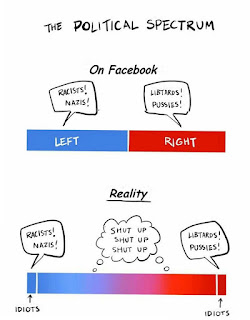 There is, seemingly, nothing that the far right and far left agree on. In fact the one sure thing that they clearly do agree on would get push back from both sides if it was even suggested they agreed on it. Both sides constantly lament, no, whine, about how juvenile the polarization, the mudslinging, the back-biting and the sand-kicking has become. However, as much as they would bristle at the fact that they actually do agree, they do, in fact agree – we are a nation divided. I became politically aware at the beginning of Nixon’s second administration – yes, that Nixon – and in the past more than 45 of my 57 years, I have never seen this nation so set against itself. It is a domestic threat that looms far larger than any foreign threat that exists.

Both the left and the right, fueled by the extremes, blame each other; both say it was started by… pick a president, pick a Republican or Democratic House and/or Senate, pick a personality or a network or even “the media.” The reasons, the personalities, the policies, the attitudes, the generations change with the election cycles but the common denominator is blame. Vote for me because they did this to you. I love America, they want to destroy it. I represent American values, they are fascists (if on the right) or communists (if on the left). And everyone is stupid. Nice.

The reality is that most of us have a complex mix of both conservative and liberal ideals. Most of us do not have a straight party line ideology that is consistent with any political party platform. We make our decisions based on who best represents what is most important to us, every time giving up some things that we must concede. The only political candidate for any office who completely represents my interests is… me, and I’m not running. In every election we make compromises with ourselves regarding who the best candidate is, not who the perfect one is. Like us individually, our collective society, reflected in our government, consists of a melding of these liberal and conservative ideals – it always has. Everyone gets something, no one gets everything, by design. Somehow we seem to have lost sight of that. The is nothing inherently wrong with conservatism or liberalism so long as both extremes are checked by the give and take of debate, cooperation and compromise. When that works, democracy works.

While our democratic republic is still working, it is not working well and if something doesn’t change, it will, eventually, stop working at all. The only power that can destroy this nation is the power that created it. Those on the extreme are fine with reforming our policies and our institutions in their visions of the extreme – in that respect, accusations of communism and fascism are well-founded, but they don’t represent the vast majority of us and they don’t even represent those in congress, despite the partisan claims to the contrary. The vast majority, Republican, Democrat and independent, love this country and are patriots just like you and I are. However, they also love their jobs and to keep them they must (or feel they must) pander to their base – and that base tends to be on the extremes. But just the “extremes” isn’t even the problem, it’s those on the extreme edges of the extremes who are driving the division, and it is no accident.

A careful reader might have noticed by now that I have not accused or otherwise called out one side over the other for instigating or being the aggressor in this quagmire. A not so careful reader might be reading in Rs and Ls where I have not placed them. Please, please, don’t. And please do not internalize this because no matter how you feel about the left or the right – and even if you don’t believe those in congress “love their country” (I’ll even go so far as to say they might love their jobs more), the vast majority of your friends, family and neighbors are just like everyone else – a complex mix of conservative and liberal ideals who must balance their interests with those running for office and choose who best represents them. All we can ask of them is that they do the same when they get to office and debate legislation and policy. When we demonize the general “other side,” we are also demonizing our friends, family and neighbors who happen to identify with the left or right of center.

President Nixon resigned in disgrace. He screwed up, got caught and paid the price. It was a dark time in our nation’s history, a veritable Constitutional crisis. But despite that, he was no dummy. One of the things he saw was similar to what we are experiencing today – a political middle that is caught in the cross-fire. He recognized the non-political, hard-working Americans who had had enough of a whole lot and he mobilized them. He gave them a voice, and a name – the Silent Majority. They didn’t want to march, they didn’t want to protest, they didn’t want to be berated with mudslinging, with accusations, with bombast – they just wanted the government to work for them. And they showed up – at the ballot box.

It’s time for the middle to rise up again. We don’t have to march. We don’t have to protest. We don’t have to post or respond to stupid memes on Facebook. We just have to vote. But who do we vote for? It seems that they are all the same – each side pointing fingers at the other, each side taking credit here and placing blame there like it is some kind of game and the side with the most points wins. Aren’t we, the people, supposed to be the winners? We win when they work together. This election cycle, I will be voting not for any candidate who thinks most like I do on any given issue, I will be voting on the candidate who pledges to work together with his or her colleagues to do the work that we sent them there to do – our work. Those who can show me they have the backbone to rise above the partisanship and work to find compromise on the issues that face us will get my vote, and I don’t care what party they are attached to. It is time for the radical middle to be heard. Indeed, it is our only hope.