I am not a so-called “prepper,” but that is not to say that I am not, generally, prepared for life’s inconsistencies. When the COVID-19 craziness began a little more than two weeks ago (in the US, but in California in particular), I was prepared. My normal supply and resupply routine had me well positioned to weather at least two weeks and, if stretched, much more. As luck would have it, I did my regular shopping – which I do every two to three weeks – right at the beginning of the “scare,” just as it was turning to panic. I figured the panic would pass, the crazed lunacy, the unbridled procurement of random items, the outright hoarding of things that make no real sense, all of that would quickly fade. The big warehouse stores where the huge inventories are stockpiled were hit first, but my much smaller (but still good sized) neighborhood Raley’s Supermarket had plenty of everything and I bought what I usually do – enough for my household. I could have purchased their entire stock at the time, but why would I? 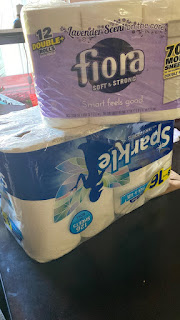 Apparently there is an answer to that question, not one that satisfies me, but one that justifies a whole lot of others, especially when panic strikes. Within a week that panic spread to my local Raley’s and every other store. It also spread to other items besides paper towels, toilet paper and hand sanitizer. Things that make some sense were disappearing – nonperishable food items and such – but also things that do not last over long periods of time. People had carts full of gallons of milk and loaves of bread, produce to feed an army and even with enough freezer space, how much freezer burned chicken will they tolerate over the coming non-apocalyptic months?

My food stores and most other supplies are still good due to my regular supply and resupply routine. I did have to go hunting for paper products today, but although both my neighborhood supermarkets are still out, the local warehouse supermarket has some. As I predicted, the supply chain has started to catch up as the panic is dying down. Even canned goods are reappearing on the shelves. There never was a supply issue. And, as far as paper products go, with so many now owning a lifetime supply, the availability might not be the initial issue next time – it will be some other random “necessity.” Maybe it will be shaving cream, who knows?

And there will be a next time. This time, as bad as this pandemic is and as much harm as it can cause, has caused and will cause, it has revealed something much more damning. Human fear. Mass hysteria. Panic. We did not hit the tipping point… this time. A virus that is a little more deadly, one that moves a little faster, something more mysterious or anything unknown that poses even the slightest existential threat will flip the mass hysteria switch and, if on a national or global scale – that’s Armageddon. Will it happen? Possibly, I have no faith in mass humanity to stop it – this little trial run has shown that. A better hope is that sort of disaster does not darken our national or global door at all.

The “preppers” out there are, as the term implies, prepared for the absolute worse. They are prepared for the collapse of government, of civilization as we know it. They are prepared to survive in a post-apocalyptic world. While I am not at all convinced that sort of preparation is warranted, this little dry run of a widespread emergency has shown me that counting on humans to act rationally when scared is folly. A lot of otherwise intelligent, reasonable people were caught up in their own individual toilet paper wars – it was not pretty. I am, however, stepping my level of preparation up a notch or two. Once this blows over, I will enhance two distinct areas. Stock and defense. While my current position is fine for this scenario and more, I clearly underestimated people.

That does not mean I’m going to dig a hole in the ground and fortify it into a bunker. It also doesn’t mean my home will be some sort of armory or storehouse. It does mean that in addition to my level of day-to-day preparation that was already adequate to cover minor interruptions in daily life, I’ll extend it to preparation that covers major ones – bigger than what we are facing now. I’d like to say I can count on my fellow humans, and under normal and even slightly stressed conditions, I certainly can, but when people are afraid, they do irrational things. The response to fear, more than the thing feared, is often what kills us. I’m not about to let your fear kill me.