In the fall of 2003, while winding up my time at a residential “treatment” facility in Sacramento, CA, I was faced with rebuilding my life. I was approaching my 41st birthday and found myself in the unenviable position of trying to figure out what I would do with my life. The prior three years were a roller-coaster of consequences from really bad decisions that ranged from near-death to incarceration to the court-ordered rehab I was currently residing in. I had about six months of abstinence from all drugs, including the drug alcohol and was, for the first time in many years, clean and sober and relatively healthy. I didn’t ever want to be in Sacramento, I didn’t plan to stay in Sacramento, but for the time being, I was “stuck” there.

Rather than try to find a job based on my considerable, disparate, but dated experience (it had been about three years since I had any real employment), I decided to go back to school and start a new career. To be perfectly honest, I went for the money; I qualified, for the first time, for student grants and loans and I was tired of being broke. But I was also on-board with this clean and sober thing, I figured I could turn that into a career (as so many do) with an AA degree from the local community college. I did have some college experience and a few college credits from a couple of unsuccessful attempts many years prior, but because all of my transcripts and my SAT scores were so old, I was required to take some assessment tests in math, reading and writing. I scored exceptionally high scores, especially in the writing part.

My math score did not surprise me, but it was also not relevant – all of my math requirements were satisfied back in the 80s. My English scores, however, were a bit of a shock. In fact, I scored high enough to qualify for an “honors” course. English was my worst and least favorite class in high school, despite the fact that I was a strong reader and writer. I had no intention of needlessly testing myself in a honors course – why set myself up for failure? But I was challenged by my peers and counselors in the recovery home as well as by my family, “what are you afraid of?” At the time, I had six months full of unprecedented – and rapid – success, so I took the chance on ENGWR 480 – “Honors College Composition” at American River College. I was enrolled full-time and managed a 4.0 GPA semester – my first ever.

That lit a fuse that I nearly extinguished soon after the semester ended. Armed with all that success, I felt I once again had control over my life (in retrospect, that is entirely laughable), and, with all that winter break “free time” to myself, I eventually came to the belief that I could do drugs “recreationally” again (I never really did, but the fantasy is powerful). That relapse proved that everything I spent nine months building could be lost much faster – and I nearly did lose everything. My grades the following spring slipped to a 3.0 GPA, and it was lucky I managed that, considering I was arrested, again, mid-semester. The fall-out continued until I was incarcerated again for a probation violation in one county and the offense that got me violated in another. By the time I got out, the fall 2004 semester was already underway. Due to being locked up, when I was released I had about 60 days clean and sober and was again at a crossroads. But this time it was much worse.

I tried to find a job, but, for a variety of reasons, could not. I was struggling to stay the course, to stay abstinent, to stay out of trouble, to stay out of jail. I went back to ARC to talk to a counselor to see what I could do with all the various and sundry college credits I did have. After some crunching, we found that one more semester at ARC would give me the necessary credits I needed to transfer as a junior to California State University, Sacramento. I decided a journalism major there would suit me and in the spring of 2005 I went back to class. With the exception of the spring semester in 2008, I have been on campus ever since.

And it is no coincidence that I have been free from all mind and mood altering drugs – including alcohol – ever since, too. The day I reported to jail on that probation violation was my first day drug-free; this past August 6th marked 16 years since I have chemically treated my feelings. I was a full-time student through the fall of 2007 when I received my BA in not just journalism, but government-journalism from CSUS, graduating magna cum laude. I worked through the spring and summer of 2008 (and before while I was still in school) as a journalist for a local newspaper before returning to Sac State in the fall of 2008 to begin work on an MA in communication studies. My plan was to take that degree and teach in a community college.

I began teaching university courses while in grad school at Sac State. I have had college students every semester since that fall and ever since the very first day of that very first class I knew this was what I would do – it would be my last career (of many). Towards the end of my MA studies at Sac State, I was once again challenged to go beyond what I though myself capable of. I was challenged to apply

for a PhD program at an R1 university. I figured my history, my age, my deteriorating memory (still, it seems), my record, and a hundred other things would preclude me from that world, but again it was presented to me in words to the effect of, “what are you afraid of?” So I applied to several schools I knew would reject me. And I got accepted – by two schools. 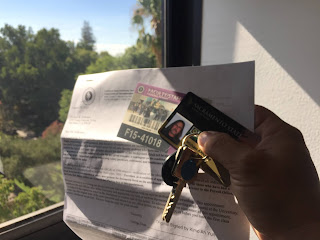 I accepted a funded opportunity to go to Baton Rouge in the fall of 2011 and attend Louisiana State University. I was coming up on my 49th birthday, had been a full-time student for most of the past eight years and was about to embark on one of the hardest things there is to do. For two years I had one foot in Baton Rouge and one foot in Sacramento trying to keep my personal life together while pursuing a doctorate. In 2013 I gave up on that “personal life,” emptied and rented out my house in Sacramento and moved to Baton Rouge full-time. However, that stress and too many other factors, not the least of which is that earning a PhD is hard, I only managed to advance to candidacy, cashing in my credits and my exams for another master’s degree. However, the experience is not one I would want to undo – it was and is an integral part of my journey and adds a richness, a texture and a nuance to my story that I would not otherwise have.

I returned to Sacramento in the summer of 2015, still with the intention of writing my dissertation and finishing my PhD (I held onto that dream until reality set in about a year later). I landed an adjunct professorship (lecturer, part-time faculty, temporary faculty – non-tenured faculty have many titles) and I have been working a series of yearly contracts there ever since. I have had days when I have come home and I kne 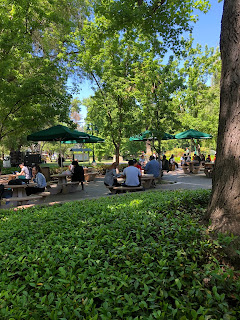 w – I just knew – I nailed it. I made a difference, I had all my shit together, I was on it.  I have had others where I knew I was floundering and I hoped my students didn’t notice. I have had times when I was rescued and I have had the opportunity to help in kind, as well. I have been lucky to work in departments where back-stabbing in the name of “career advancement” is not the way they operate, but I have heard stories where such is not the case, too.

Today, Tuesday, August 25th, 2020 is the day before the official beginning of the fall semester. Everyone who hasn’t been living under a rock knows this semester is going to be different, even compared to the COVID-interrupted spring. At the beginning of every semester, I am filled with excitement, anxiety, and even some fear. It is electric and those feelings are even more pronounced in the fall. It’s there this, fall, too, but without being in the classroom – the real classroom – next week, something big is missing. Being on campus, around students, colleagues, in that dynamic, energizing, engaging and inspiring environment simply cannot be replicated online. It’s funny, sort of. I should prefer this. I generally hate being around a bunch of people, in crowds, amongst hustle and bustle, but the one and only excepting is campus and, specifically, my classroom.

This is a thing that will be looked back on as that thing in 2020. It will be seen as a surreal nightmare that came with all those other things that same year. We will either be able to say we rose a 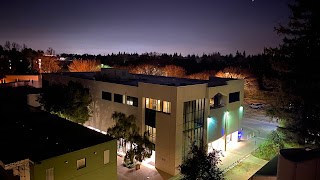 bove it, we survived it, we conquered it or that we succumbed to it. But all that doesn’t matter right now. It’s fall and I am still excited. I am still anxious, I still have that same familiar fear. And it’s not because of  COVID-19, it’s not because of 100 percent online, “distance” learning, it’s not because of a global pandemic or an ugly election year or racial or economic inequities. It’s because the fall semester is about to begin. And, despite all this shit that is swirling around us, I still love what I do, even if I hate how we have to do it.