Just to be able to remember “what it was like 21 years ago,” we must be considerably older than 21 years of age. My first memories are from the age of maybe four or five – perhaps a little younger, but they are so sketchy that I hesitate to qualify them as full-fledged “memories.” Those are more ephemeral, ghostlike, perhaps dreamlike images that I cannot really contextualize. But from the age of about five, they become much more concrete. That means I had to be at least 26 before I could say things like, “Twenty-one years ago, we didn’t have…” However, I can remember what life was like when I was 26, and I wasn’t thinking about shit like that. I wasn’t really thinking much at all.

Twenty-one years, in the context of a human life, is a long time. It is almost one third of the average human life expectancy, worldwide. It was, and still is for certain things, the arbitrary number of years it takes for a child to reach “adulthood.” For many species, 21 years is more than enough time to come into existence, live, procreate and die without a trace. When looking at recent technological advancements, the past 21 years has been nothing short of amazing, although 500 years ago, a 21 years span might have looked no different at either end. Still, for people, generally, 21 years is a good long time. 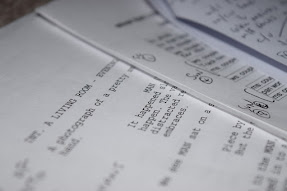 And that went on for many years. I did some things. I had some success. I had a family, a home, a white picket fence and a mini-van… a wife and a career. But all of it, in retrospect, felt like I was living by someone else’s script and all the while I was “ad-libbing.” What did the ad-libbing look like? It was the epitome of not thinking. Following the “establishment script,” the rules, the norms, the conventions, the “way we are supposed to live life,” would have served me well and kept me out of trouble, but for some reason I just could not keep on that track (I have some ideas why now, but at the time I had no clue). The “left turns” were minor in terms of adding, for lack of better words, excitement, entertainment or recreation to my life – through chemistry - and the related larger “left turns” that manifested in major life changes. The minor, over time, often led to the major because there is no such thing as recreational substance abuse, better known as addiction.

At 26 years old, I was still largely a responsible(ish) young adult with a promising future ahead. All I needed to do was follow the script that remained ahead of me. While I did need some cooperation (the dissolution of my short-lived marriage was not in the script and, while my wife and I going off-script contributed, there is a divorced, single father responsible adult script left), it was still in my hands, if I could do it. I could not, and playing the victim was particularly helpful in my justification to take my character into new and uncharted waters. The twelve years between my 26th and 38th birthday, in retrospect, was not a long time, but so much happened. The successes were still there, but they were fewer, farther between and shorter. And the trouble mounted, slowly at first, but it grew by orders of magnitude. I finally got a handle on all of it in 2003 and again, for good, in 2004, buy by then a lot of damage was already done.

Twenty-one years ago today, my life was chaotic, and my two youngest sons were along for the ride. They might have said that they were living a good life (they have said so before), but they were not aware of everything going on and, despite living in what many refer to as “paradise” in the mountains, there was plenty of trouble in paradise. In just four days, all hell would break loose.

We were all, of course, blissfully oblivious to what was on the horizon, but it was all part of the script I was living – it was not a preordained conclusion, but is was certainly in the cards. On October 17th, 2000 – not quite 21 years ago, everything would change. For me and my family, it was the beginning of the end – not quite the end yet, that was still coming, but it was the beginning. The beginning of the beginning would not come until 2002, but the actually new life I enjoy today took another two years to come to pass. Ironically enough, I am following my heart and following the rules, conventions and norms of civilized society – the script I fought against so hard for so long.

Posted by Michael K. Althouse at 9:50 AM

Michael, wish I could tell ya my life's script. It's insane, but the twists are far fewer now!

I've been kicking around the idea of putting it into blog format anonymously for the world to read one day. Anyway, nice to see you're still blogging!

Thanks. I wish I could place you, we must have a connection from the past - the Blog-O-Sphere, would be my first guess. I don't post nearly as much as I used to, in part because of Fakebook. I'm cross-posting over on the Medium, now, too. I've actually made a tiny bit of money there. The key word is "tiny." Like, really tiny. 😂