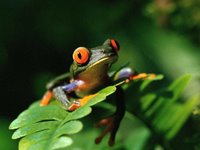 Frogs! I just love ‘em. Really, I do. No, I’m not a frog fanatic with frog sculptures and pictures and stuffed animal frogs scattered about. Nor do I have any desire to eat them even if they do taste like chicken. And I don’t own any pet frogs. However…

There seam to be a number of them that are quite fond of me and my hospitality. They appear to have adopted me and they apparently feel quite at home here. As the sun sets every evening, a cacophony of croaking escalates into a soothing symphony that can be heard three houses away. It really is quite impressive – by the sound of it, there must be hundreds, but the number is probably much lower.

I moved into this home last June. In front of the house, just outside my office window and next to the front door is a decorative pond with electrically pumped brook babblings. It has a little cascading waterfall when I turn it on (which is rare). Sometime in the late summer or early fall, as if by magic, tadpoles appeared in my pond. This, I thought, is so cool! I discovered that the local Petsmart actually had tadpole food. In fact, they had two kinds, snacks and treats. Crazy!

So of course I buy the food and give them some according to the directions. They get bigger and bigger and soon they sprout little hind legs. I keep feeding them (they eat a lot and there are a lot of them) and I’m careful not to add any of the algaecides to the water (or any other chemicals) that may harm them. As careful as I was, their numbers kept on decreasing and it didn’t appear, judging by the ones that were left, that they had hopped off on their own.

Soon enough, they were all gone. Thinking my tadpoles didn’t have the genetic “right stuff” or that maybe some other predator may have got to them, I added the algaecide to kill off the growth that had begun to take over the pond. It worked and the pond was clear in no time. Funny thing though – I didn’t see any evidence of any tadpoles – dead or alive.

Fall turned to winter, the temperature dropped and the rain came. The New Year arrived right on schedule and with it, the croaking of just a couple of frogs. It is not unusual to see or hear critters in this area of Sacramento County. We are not far from the American River and there are numerous creeks and streams flowing nearby. In fact, there is a flock of wild turkeys meandering through the neighborhood on a frequent basis. Hearing a frog croaking here and there is not all that unusual.

Soon enough, the chorus grew and grew and continued to grow. There are times when I can almost feel it. Furthermore, they have taken up residence in and around my now algae-free pond! It was apparent where they were early on, but I could never “catch” them in the act. Every time I went out the front door they went silent. Eventually they got used to my presence and just ignored me.

But I still could not see them. I was baffled. How hard could it be to see this big old loud frog croaking the night away? Finally, I caught one. Well I didn’t actually “catch” it, but I saw it dart off a rock and into the pond to swim under another rock. It was about the size of a nickel. I thought that it must be just a youngster – that the big daddies were too clever to come out of hiding.

Over the next few days I saw some more. The situation was always similar to that first one - small, nickel size frogs. I still couldn’t figure out where all these big old frogs were hiding. Just a couple days ago it hit me: Those were the big old frogs making all that racket! There must be a bunch of nickel size frogs with silver dollar sized lungs (or whatever it is frogs have). Best yet… they were my tadpoles! Most of them apparently and every night they sing me a melody that is never the same but always familiar. It is strangely soothing – almost like being in tune with something much larger than myself.

I guess those tadpoles had to come from somewhere – I can’t wait for next year’s litter (or whatever it is that frogs have). Coincedentally enough, I have no bugs around the front of my house - I've got friends higher on the food chain!
Posted by Michael K. Althouse at 11:21 PM

You have frogs, I have crickets. Gazillions of them. I find them all over the place. I don't mind but my wife is extremely superstitious and if she finds one in the house, she freaks. I guess Filipino superstition says that if you find a cricket in your house a family member is going to die.

When I was stationed over in the Philippines we had perimeter lights around a power plant I worked at. Those lights would attract toads by the thousands. We were warned to be careful when going outside at night because the toads unfortunately attracted something higher on the food chain...cobras.

Nice story though. A question though, if you live as close to the river as you say do you have flood concerns when it rains hard. I see alot of stories on KCRA about folks who are constantly in danger of flooding around the rivers in Sacramento.

I live between the Yuba and Feather rivers myself. So I have twice the worries but it has never flooded my neighborhood...yet!

neal ~ flooding, as you know, is a huge issue in this part of the state. I live near Lake Natomas, a couple of miles from the Nimbus Dam. The river flows through a canyon and although the bike paths and parks next to the river flood - most of the houses in danger are a couple miles downstream.

That's the long answer - the short answer is no, I'm in no danger of flooding.

What a great story!

I am a total animal freak. I like them all, big and small. It does take a special person to go through so much trouble for "wild" animials and I'm happy you did it. It really pays off, doesn't it??

jinsane ~ ya, they are an unexpected blessing for sure. I got kinda attached to the little tadpoles and got somewhat stressed when they started to disappear, but I guess they just became frogs much faster than I thought! They sure have a lot to say. Maybe it's mating season, who knows (I'm sure someone does), but it's like a suburban wilderness every night.

I know this is going to sound real girly but... I do have a few metal statues of frogs that "greet" guests near my front door. One "plays" the viola, one the horn, and they always get lots of compliments because they don't have that cheesy look about them.
Yeah, I know... but I'm into garden statuary, as long as it looks classy.

As for the real guys, I don't have any real close, but occasionally hear them croaking into the night. We call them tree frogs, because they sound like they really are in the trees. They have to watch out for neighbor kitty, because she's a bonafide hunter, and shows no mercy for animals smaller than herself.

Cool that you have a pond!

ellen ~ Having garden statuary isn't "girly," gardening is! :') Just kidding! I guess caring about some uninvited guests isn't so manly, but so what... I know who I am!

My home is their home.

I had a tadpole as a child and watched it mature into a frog. Pretty amazing thing to see! Nature is such a beautiful thing and it feels good to be a part of it. In retrospect, a tadpole would have been a lot less maintence than my bichon frise. Although, I wouldn't be surprised if PetSmart started to carry a leash for your tadpole ;)

I have been trying to think up a good invention for a pet owner. People will buy anything and everything for pets!

Hey-if you want, you can send me a picture of a frog and I will have "Frog of the Month" instead of Cat of the Month!

I left a bunch of comments on your previous posts....I don't know if you read them or not. One of them was extremely sarcastic, and I think it will tickle your funny bone!