Welcome to Colfax, California. While the heat today in Fair Oaks - elevation about 300 feet – was a balmy 100 degrees plus (at 11:15 p.m. as I write this, it is still hovering around 80), in downtown Colfax – just under 3,000 feet - it was about ten degrees cooler. I spent the better part of the afternoon there “working.” I was interviewing locals about how they feel Colfax should grow, and enjoying the company and the weather. After I thought I had enough quotes and opinions, I decided to go downtown to get a couple more interviews and start writing.

I got to town just before noon and started interviewing at the local supermarket that is in a newer part of town. I tried to intercept customers on their way in so that their groceries wouldn’t have to endure the heat while I questioned them. I didn’t bother with the tourists; their opinion was not what I was after. Many of those who identified as locals were too busy to talk, but they were all very nice and polite – except one. And then there were a few that were happy to answer my questions, about half of which had read part one of my story.

After I spent enough time harassing the grocery store’s customers, I moved to the oldest part of town, South Main Street. The buildings there have survived two big fires in their 100-year plus (plus a lot) lifetime. Camp 20 is a coffee house that, like my favorite coffee shop in Sacramento, has free WiFi for its customers. They make a mean cup of coffee as well. My intent was to begin writing my stories in the warmth of the summer shade on the sidewalk outside the coffee shop. 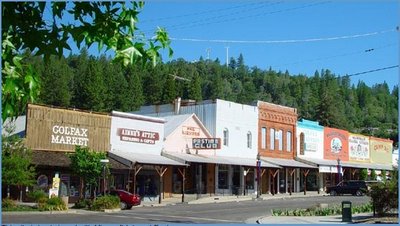 So much for making plans. I was not there more than five minutes when a local walked by and struck up a conversation with me. Soon he was sitting with me at the table and I was getting schooled on the ins and outs of Colfax. Fascinating. Over the course of the next one and a half to two hours – I got nearly nothing written, but I learned so much. I spoke with several locals about the past, the present and the future.

Although much of the conversation has little to do with today, it has everything to do with how we got here. And I’m not talking just about Colfax. The technology, the growth, the railroad and the Lincoln Highway, Old Highway 40 and Interstate 80 and so much more that went into making Northern California what it is today. There is living history in those hills and I could listen to it all day.

As much as they volunteered, they asked as well. Where do I hail from? What brings me to little Colfax? How do I like working here? What do you hope to do with your degree? That last one is a very good question – one I have not thought about recently. And… recent experience has not necessarily changed the response; it has deepened it; in some respects clarified it and in others perhaps expanded it.

This little three unit internship has lived up to everything I had hoped it would and so very much more. I owe much of it to the little town of Colfax, its newspaper and most of all, to the people who live in and around this “sleepy little mountain town.” It’s so much more than meets the eye.
Posted by Michael K. Althouse at 11:59 PM

The photos of Colfax make me want to visit there - but I hate being a tourist. I enjoyed reading this, Mike, you sure a big hit with the local folk, I think that says a lot about you. Keep up the great writing.

And thanks for the comment you left yesterday, I hadn't heard from you in a while. The subject of that post motivated quite a few people to write their thougths! I loved it.

Sleepy little towns always have story jewels just waiting to be unearthed, don't you think? What happens to those stories if no one is there to ask the questions and patiently wait to hear the answers?

There are times in my line of work when I am listening to an unearthed story.......full of history, personal perception and descriptive emotion and I am struck by the fact that maybe I'm the only one outside of the sleepy little village/town who may have heard the whole saga. It always makes me feel a sense of honour that the individual who is sharing his/her take on their world and their life is comfortable enough to trust that I want to hear what they have to say.

The daily events of a sleepy town may not add up to a fascinating read all on its own.....only because it skims the surface of what's really taking place. The people and the connections between one another etc. are the texture of any story!

Your post is great. It allowed me to remember a couple of encounters I have had in the past that I had forgotten about.

Colfax sounds really neat. I don't think I have ever even driven through there. Glad you got such a wonderful place to do your internship. I'm thinking anyplace they put you, you would find the hidden gem in the rough.

Great Post!!! I love sleepy little towns like that! The people are definitely what makes a small town a great place to visit.

I'm so glad that you found some locals who really wanted to share their stories with you.

Is that really Colfax?
Looks like a quaint town! I love it.

Maybe you'll meet "MarMar" and "Papa". They are some family of mine. They used to own that huge antique store/restaurant you can see from the freeway. They live in this old victorian-style house down that frontage road past McDonalds. Their real names are Arnold and Ardith Solis and they are the nicest people on earth.

Very nice writing. Your journey to this town made me think of a book I wondered if you would like- Prairyerth (sp?) where this wonderful writer spent a few months in the centermost part of the country and managed to write this enormous book of ponderings and information about this at first seemingly inconsequential place. You might want to check it out!

This sounds like such an interesting and wonderful journey, Mike...I'd love to read more about Colfax...Where is it exactly? (You may have said in another post and I missed that...sorry) The picture of the "Main" street---well, I assume it is the main street...is such a winderful view and give me this nostalgic feeling and I've never even heard of Colfax before!
Very enjoyable read, dear Mike.

I can picture myself hastily dodging your interview solicitaton...

I know what I like the best about my 100 yr-old house is the history I learned about it from a 70+ year-old neighbor who lived here as a young child. The sea-captain who brought the European trees in the yard, the worst storm's water hieght, n many other gems most newer folks here never bothered to listen too.

The color of every small town is it's people! Ya can't go wrong there. Our local weeky ran historical series pieces n photos for 6 months last year- n I read every single one- they hold lots of local appeal.

Photos showed buildings before they burned down, what the riverfront looked like before built on, some old-Period clothes n vehicles stored for centuries in barns, n some local families' long history back to the town's early days. These are stories n items only obtainable through research with the residents, n verifiable with records n older periodical searches.

Don't know why the storefronts there reminded me of the movie "Paint your Wagon" with James Coburn n Clint Eastwood. Are there gold-mines in those hills?
Have a blast finding some...

I was going to say the same thing about Colfax as Snaggle did. The picture of the town reminds me of the western shows I used to watch when I was a kid. It's so quaint, and there's nothing like that around here... but then a lot of my city got burned down, and reconstruction still continues today. As a matter of fact, it never ends! The only real history left is in museums now, all else has been torn down many times over to make way for steel and glass structures. Well, at least somebody was smart enough to write it all down and take pictures.... like you did!

Bravo for a great post... and I look forward to hearing more about your sleepy little western town. It sounds beautiful so far!

it's funny, but there's a part of disneyland that looks just like that.

meeting the people from Colfax will probably be your best memories of this internship. glad it's working our for you.