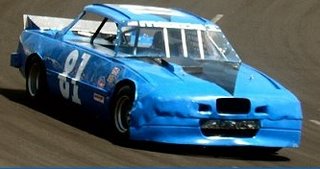 I am not what you‘d call a huge race fan. I am known to watch bits and pieces of some NASCAR races, an occasionally NHRA drag race and some other forms of motor sports on TV. I have been to many of the big professional events of the nationally touring series: Winston (now Nextel) Cup, IRL Indy cars, AMA Grad Prix, Super Bikes, Monster Trucks, etc. It sounds like a lot, but it really is just a sampling of these different race forms as they visited nearby tracks. It does not make me a “fan” in the fanatical sense.

I have also had the opportunity, on a more frequent basis, to attend much smaller events at the local tracks close to areas in which I have lived. These are the short track, fairgrounds type of venues that so many small rural and even suburban communities have. I have had the pleasure to know a couple of drivers in some of these races and watch them race from time to time. Not including today, it has been some time since I have gone to the races.

The very first race I ever attended was a drag race at the now defunct Fremont Raceway. It was the venue for the NHRA Northern Nationals for years and eventually added a quarter mile dirt oval for sprint car racing – eventually changing its name in 1981 to Baylands Raceway Park before succumbing to the encroaching residential dwellings and the lure of the developer’s money in 1988. I don’t remember how old I was or what year, but it was before the dirt oval and the name had not changed yet. It was in the middle of nowhere – on the wrong side of the tracks, on the wrong side of the bay. It had to be the early seventies.

It wasn’t a major event. If memory serves, it was a bracket race. There were no national stakes, it was just a bunch of locals that "run what they brung." It was not the last time my Dad took me to the races, but it was the last drag race. He also took me to a handful of other races - different kinds, big and small - and when I had kids of my own, we all went. As much as I am not a race fan, my Dad is less one. I think he took me mostly because he thought I would enjoy it. He was right about that, but I know he had a good time too.

Ok, so going to the races with my Dad has a nostalgic place in my heart. Given - so does doing lots of other things with my Dad. That’s not the point. Nor is it to analyze what constitutes a fan of a particular sport. It’s an open ended definition – in my opinion, it takes more passion and dedication to a sport than I have towards racing to make me a fan. Having said that, I suppose I could look at the money spent on the pursuit and draw the line at a dollar amount – or time spent – or miles traveled – enough!

What it’s all about is simply this: There are some spectator activities that do not require extensive background information to be enjoyed. It also doesn’t require extensive investment in travel or money or time. Often, the travel and money involved to attend a major national event preclude many from enjoying them – they are relegated to TV. This is not the case when it comes to local, short track, fairgrounds style racing. It is often nearby, inexpensive and one need not know anything at all about the class of vehicle or the drivers to enjoy an afternoon or evening of excitement like none other.

A few hours ago, I returned home from the Placer County Fairgrounds in Roseville, Calif., home of the All American Speedway’s paved quarter-mile oval. I met several friends there, one of which was racing. Although I had the somewhat more expensive pit pass, general admission tickets are only $10.00. There were several heat races, trophy dashes and main events in four or five different classes. It was a blast from start to finish.

There were no TV cameras, no mega trailers and no pit stops. The cars were not brand new and shiny, but bore the scars from a season (at least) of racing. The teams operate on a shoestring and make do with what they have – which in many cases is a whole lot of guts and not much else. And they race. And we watch; fathers and mothers; sisters and brothers; uncles, aunts, nieces, nephews, cousins, in-laws and friends - all from the local neighborhood, the neighboring city or the next county.

It’s the motor sports version of the high school football game or the local little league -families and friends getting together to watch families and friends. The rest of the world isn’t watching and doesn’t really care. My friend raced a little blue car, number 81. He lost his main event. Most of the race he was in a battle for last and next to last. He came in last (of the cars that were still running at the end) – but we cheered for him as though he was racing for first – and came in second. After his race was over, he joined us in the grand stands. His smile was a mile wide. I guess that sometimes, it really isn’t whether you win or lose…
Posted by Michael K. Althouse at 11:39 PM

My son is living for the day he will be able to race his car. It's all he's wanted to do for years. I'm hoping we can find someplace very similar to what you are describing here when the time is right for him. It also brings back two great memories from when I was a kid: 1) my dad was in an amateur race club and loved it, (his racing buddy was an actor named Robert Stack) 2) before the area was over-developed we had El Toro Speedway and it sounds a lot like what you have in Placer County. I would lie in bed at night as a little girl and listen to the engines roar even though it was miles from my house - it was LOUD. Loved it. (sorry to take up so much space in your comments but you struck a chord with me - can ya tell?)

Boy, you can't hardly live in the South without being a Nascar fan... so I'm not sure how I fit into the mix. I'm not a big race car fan, myself.... but have been to a few races. No matter if you're a fan or not, you end up captivated over the cars and races, you just can't help yourself. I suppose it has a lot to do with seeing and being there first hand.

That is my number one fantasy! To drive a race car!

Have a good 4th too.

I hope you are having fun racing.
Have a great fourth and be safe!

Ahhhh, I remember those days of Fremont and the fun we all had there. You brought back a fun memory by reading this... Thanks Mr. A!

Congrats on your first article in the Colfax! I will be following along online to see your future writings.

Have a fun 4th at the races!
Enid

Hope you had fun on the 4th! I have never been to a race and in all honesty probably never will go to one....I don't even watch them on TV, but, I can certainly understand the "call" of racing...! Hope you had and are having a blast!