I managed to get a commentary out for Prosper about each of the speakers at Perspectives 2006 except one. By the time former Senator Bob Dole had finished, the event was over and it was a mad rush to get out of the convention center. Dole was really two speakers rolled up into one. There was the witty, funny, spontaneous and engaging personal Dole and then there was the dry, political and oh so Republican Dole. Although the first personality opened and closed the "Dole Show," he would have done better to fire his speechwriter and just be himself for the middle.

Not much to say about a former senator and American hero? Perhaps, but the moment's gone. It was three days ago. There was a moment, however, that I still can vividly remember. It stirred feelings in me that similar circumstances always do. It's never a surprise but is surprising nonetheless. It was the opening ceremonies. 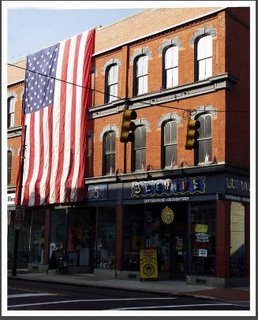 The Sacramento Sheriff's Department, dressed in their finest dress uniforms and with all the military pomp that is appropriate, presented the colors just prior to stirring rendition of our national anthem. I always get goosebumps when I hear it and this time it was performed by a choir that just nailed it! It almost brought tears to my eyes... and I was not alone.

The point of recounting this experience is not to convey the patriotism and national pride the moment brought - indeed, words cannot describe - but rather to show how something as simple as a flag and a song can unite an otherwise diverse collection of individuals. In that moment, those precious few minutes, we were Americans, nothing more, nothing less - and that was enough. It didn't matter how each of us felt about the president, our foreign or domestic policy - even terrorism, we were united as Americans.

The Star Spangled Banner came to us in a way that is truly and uniquely American. A battlefield poem set to the tune of a British drinking song - its heritage mirrors our own. It's curious, really... how one song can release that kind of pride and emotion. I remember it as a child, when my parents took my siblings and me to the Stanford University home football games. There was this cannon that was only fired on two occasions: Whenever Stanford scored and when the marching band played our national anthem “...and the rocket's red glare."

There they are again - goosebumps.
Posted by Michael K. Althouse at 5:25 PM

I volunteered to sing the anthem into a microphone (accapella) for an entire home season of Cape League Baseball one summer, still I never get sick of it, n it never fails to ellicit that up-welling of emotion in me.
Music is powerful...
Then there's the tunes that depress the heck outa me...

I think we all like Bob Dole better as himself also!

Wow Snaggle must have a great voice - that's not an easy song to sing!!!

I love the national anthem too.

That WAS a beautiful moment. It was breathtaking. I don't count myself among the furiously patriotic, and in fact I disagree with a lot our flag has come to stand for. But this song reminded me that basically, deep down, I'm still American. I'm still in love with her, as a place and as an idea.

I find this post very interesting, as I witnessed a similar account of your story, but with a different country. Catering the 185th Independence from Spain Party for the country of Guatemala this weekend, I noticed how the guests swelled with pride while their former national anthem was played. The song was very long, yet they knew all the words.

I had a chance to look up Guatemala later, and realized that a great deal of these people were wiped out in one of the largest ethnic cleansings of Central America, not to mention years and years of oppression by their own government, the Mexican Government, and Drug Lords. They are happy to be here, integrated and legalized in the system, yet they still feel the tug of their native country when their national anthem is played.

I always thought that Willie Nelson had the right idea though... our National Anthem should have been "America the Beautiful". Fruited plains and spacious skies.... not bombs going off in the air. But, that's just my opinion.

what a beautiful post, mike. being a july baby, i have a special fondness for the 4th of july and that feeling i get that you described so well. being Americans together.

my fantasy is to sing the national anthem for a large crowd. don't tell anyone, but i do sing it in my car -only when alone, mind you - once in a blue moon.

One of the more moving aspects of watching the Olympics is watching the medal ceremonies. I'm a Winter Olympic fanatic mre than Summer, so was glued to the TV last year when they were in Turin, Italy. Canada did well, and there was a swell of pride and tears anytime the Maple Leaf was hoisted and a young athlete after years of training would face the flag and sing the words. The country's anthem that got me the most choked up was the rousing Italian anthem. It was beautiful to listen to and to watch a "local hero" burst with pride always left me in a puddle of tears.
More than our "Canada Day" on July 1rst when all the country is strewn with flags, Remembrance Day on November 11th, when we honoured our veterans is the time when I seem to be affected by my National Anthem.

I get goosebumps everytime I hear Oh Canada....not so much when I'm in other parts of the country, but in Quebec it means so much more because of the looming threat of seperatism. Uniting such a small fraction of the Quebec population is always special...more so when it means it's to do with Canada.

Bob Dole can be very charismatic is he wants to be so can Al Gore. What is this world coming to? :P

It was a Dole that wasn't dull. (ba da bump!) He became very "party line" and extremely boring when he read his "prepared" speech - one that i am quite sure he did not write himself.

Yes, I too am impressed by snags vocal prowess!

It was a very impressive rendition, one that i'll always remember.

I guess it would be arogant - even stereotypically American to think the experience is unique to us. As our two Canadian friends commented, they get every bit as misty when they hear Oh Canada as we do with the our national anthem.

I kinda like the way the SSB came to us, I'm not sure I agree with old Willie.

You sing in your car?? oops, sorry, I told. Me and my big fat... um... keyboard.I gotta respect a fantasy like that though, no singing for me in front of crowds of any size.

The Olympics are the best place to see hear and feel the national anthems from all over the world. It's definitely mind-opening.

Al Gore is a regular riot! He was on the list of possible speakers for Perspectives 2007. Now that would be worth the $200 plus admission - but not if I have a press pass!