October 17, 2006. It’s just another day – nothing too special about it, nothing special at all. Six years ago, October 17 was a day just like today. Not that it started just like today, or any other day for the past couple of years, but it was like any other day six years ago. Chaotic, hectic, rambling and haphazard were among the adjectives one might have used to describe my life at the time. No matter what it may appear in retrospect, in the moment, it was a day like any other; a perfectly normal Sierra autumn day.

It would not remain so for long. Before the crisp morning chill even had time to be tempered by the autumn sun, my world drastically changed. My life nearly ended that day; it hung precariously by a thread in the days that followed. I was 37 years old in what should have been the prime of my life when, in a split second, everything changed.

I was on my way to Squaw Valley Academy to drop my then 13 year-old son off at school. The school, as its name implies, is in Squaw Valley, Calif., near Lake Tahoe’s North Shore. His little brother stayed home that day… he did not feel well. Although it was not the stay-home-from-school variety of illness, well, what can I say? It was part of the insanity my life was at the time - his gain, as it turned out. Just about a mile or so from Squaw Valley…

My lifestyle in those days, as I alluded to earlier, was busy. It didn’t need to be, but it was. I was tired that morning – really tired. I wanted both of my younger sons (my oldest was 16 at the time and living with his mother) to be sick that day. I was tired and I knew it. I knew from experience that all I needed was a couple of hour’s sleep and I’d be ok. Although I don’t recall for sure, I’m pretty sure I suggested to my kids that they might not be feeling well that day.

My kids have not experienced a great deal of stability growing up. A single father brought them up for most of their formative years. We moved frequently. They have all had difficulty with school, maybe as a result, maybe not. The point is that when a day off of school is thrown their way, it is readily accepted. My 11 year-old took the gift without reservation. His brother however, threw me a curve.

It was an ongoing battle with the kids and school. I had a sort of “911 proactivity,” meaning that when the school brought the kids’ performance (or lack thereof) to my attention, I got proactive, albeit reactively. My middle son must have recently felt the sting of that proactivity, because when I suggested that he might not be feeling well, he granted that he wasn’t but then said something that surprised me, “But I’m not too sick to go to school.”

He went on to explain that he was behind and couldn’t afford to miss a day at school. I guess that last round of reactive proactivity was effective. I had no choice; I had to get him to school. It wasn’t as though I thought I couldn’t make it, it was that I didn’t want to. My inspired parenting left me little choice, and I couldn’t even be angry with him – he was the responsible one. Of course, once my little one was sick, he wasn’t planning on getting better right away!

It was cool that morning. The snow was going to be coming in just a few weeks and the Sierra was preparing herself. We were looking forward to an early and long winter – the snowboard equipment was already prepped. On State Route 89, there is a long, sweeping, right-hand turn; the Truckee River was to my left and the mountainside on my right. The police report and the truck driver said that I was asleep. I never turned when the road did. I went straight into the path of an on coming, fully loaded logging truck. The truck driver went as far to his right as he could, but he was not able to avoid me. 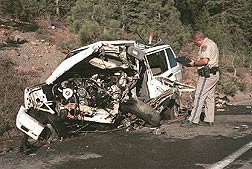 I wasn’t expected to survive. I lost most of my blood due to internal injuries and massive bone trauma. They say I was in and out, I really don’t know. I remember some sketchy bits and pieces, but I can’t say what was real and what was not. Everything that I know is second hand. Since this is not intended to be a thriller, I’ll say right now that my boy walked away with relatively minor injuries – physically.

Six years later, it’s almost like it was a dream. I was “revived” (I had no head injuries; but I was very heavily sedated) about five weeks later. I was confused to say the least. I had all kinds of machines and tubes and hardware sticking out of me. I discovered later some new little scars that were from the minor injuries I had sustained. By the time I came to, the stitches and the scabs were gone – just new scars were left behind. I had a full beard… and I couldn’t talk because of the tracheotomy they had to perform. I was constantly thirsty.

I slept through those five weeks, but my family lived a very real nightmare. I was blissfully unaware – my nightmare began after I realized exactly what had happened – and why. Although there is a whole lot more to this story, this brief “readers digest” version is only the beginning; it is one that has no ending. It could have been the end, but for reasons I can’t even begin to explain, it was just the beginning. It sure didn’t seem like it at the time – six years ago today.
Posted by Michael K. Althouse at 11:33 AM