Those that guessed the "mystery" photo in my previous post ("Preview") is part of a motorcycle - you are correct. In fact, it is a velocity stack to a Harley Davidson (actually, this one is a custom, but for the sake of this discussion…). I took the photo today at the Easyriders V-Twin Bike Show Tour in the Sacramento Convention Center. Between the bikes parked outside and those on display inside there were literally thousands of motorcycles there - most of them Harleys. Of course, custom accessory manufacturers, apparel companies and all kinds of other peripheral business interests that could tap into this multi-billion dollar industry were showing their wares as well. 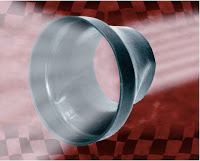 A velocity stack is part of, or might be used in place of the air cleaner for a gasoline (or equivalent)-powered internal combustion engine. As the air enters the outer bell-shaped opening, it is funneled down to a smaller exit before entering the carburetor or the throttle body (if fuel-injected). At this point, the basic principles of physics take over – since the same volume of air that enters must exit, the speed of the air must increase to make up for the decreased space in which it is able to travel. In other words, it speeds the air up, allowing for better air flow. Maximizing the air flow through an engine is the key to better performance. More air and fuel equals more power. More power equals… well, you get the picture.

The photo in the "tease" post ("Preview," below) is looking directly into the velocity stack. I was on my way out – it is one of the last photos I snapped. It was the shot, not the bike that was calling to me. On either side of the stack the twin sides of the motor’s “V” can be seen. The bike was like most of the others – shiny, clean and glistening from polished chrome. This particular one had the theme of the local NBA franchise, the Sacramento Kings. It was impressive, even in a sea of impressive bikes.

This is the second year in a row I’ve attended this show. It was pretty much the same as last year. Mostly the same vendors, some with the same scantily clad women, were advertising their merchandise. Even a few of the bikes were returnees from last year. It was still, however, simply remarkable how much cold hard cash is represented by each one of these bikes. Many - strike that - most of them would carry a price tag well in excess of $50,000. Well in excess. And that’s not even counting the bikes that were outside, some sporting comparably lofty price tags, waiting for their owners to return and ride them home.

I am a newbie at all this. Although I’ve owned several motorcycles and have had a motorcycle license for many years, for most of that time, owning and riding a Harley was only a dream; a dream I've had as long as I can remember. The mystique has always been just out of reach. Until a little over a year ago, I could only imagine. I can report today that the mystique is everything I dreamed of and so very much more. The sound, the presence, the look… and the chrome, everything that I admired so much about these American legends is not just hype. It’s real and I get to relive it every time I fire my bike up.

In the world of Harleys, my bike is the lowest rung of the model line. It is the smallest, least expensive, entry-level bike available. It is not the one I wanted or is it the one I will end up with. But it's a Harley. It has two cylinders - one in the front and one in the back. It was available at a price and terms I couldn’t refuse. I got me back on two wheels much sooner than I had hoped. Sooner than I had dared to hope. And although it may be on the bottom of the heap as far as Harleys are concerned - in the world of motorcycles - it’s a Harley. It’s mine. And I get to participate in the mystique.

And that... is enough. More than enough.


Click any picture or here to see more photos on FOTOMike.
Posted by Michael K. Althouse at 11:43 PM

Very cool indeed. You've given us a perspective that, frankly, most of us likely would never have had. Thanks for that!

Makes me want to get out and ride!

Any thoughts of going to Sturgis for Bike Week?

Cool! :) Congrats! Wandered over this way via Biker Betty! :)

I love the bike pictures! I love motorcycles. Our next door neighbor was killed when his bike impacted a telephone pole at a very high rate of speed about 18 months ago, so I have a very healthy respect for them, but I love them all the same...there is nothing that gives you that sense of freedom like the speed and the wind whipping all around you...it feels almost like flying.

That's very snazzy. I know a lot of people whose dream it is to own a Harley...men and women alike. Glad you can now be a part of the mystique ;)

Michele sent me, Mike. I know very little about motorcycles, but since my favorite cousin died on one, I am not a big fan.

I have a blogging friend - the blonde - who has a Harley Davidson. In the thirties my Dad had a Rudge with a swallow side-car and we travelled all over Britain -the happiest of memories.

Sorry I forgot. Michelle sent me.

Those are definitely some nice rides there Michael.

I am in total agreement with you on the beauty of riding a two wheeler.

Although I ride a Kawasaki rather than a Harley I do think the HOGs are beautiful bikes. My dad just bought himself a brand new Street Glide. Jet black with chrome in all the right places. What a work of art.

That Easy Rider Show is really a great show. I am glad I got to go! Looks like quite a lot of people hit it though! I was up north and was tempted to go to it again just to catch some No. Californian's view of it....didn't quite make it from the Alameda area. Looks like I will be up soon though. My move is happening in a couple of weeks...

You have your bike and actually ride it.
Some people look down on a Sporty but back in the sixties they were highly chopped bikes by more than a few hardcore rider. I pity da fool who has never been on a bike and goes out and buys the biggest one he can find.(Like a snot nosed kid who just got his license driving a 300hp car he can't handle).They look down on the Sporty riders trying to act large when they can hardley ride what they have. Not to mention all the hard riding they do;400 a year isn't much riding. What are they called?? Oh yes! Posers.

Oh man....I knew I was going to miss a good show. I wouldn't ever want to own one of the flashy chopper type bikes, but they're sure a lot of fun to look at.

I love the bike with the blue flames... That paint job on a Honda Spirit 750 (in my garage) and I think I'd be a happy wabbit...

It sounds like you had a lot of fun this weekend at the bike show tour 2007. I am in awe of those bikes and the men and women who ride 'em with such courage and flair.

In 2001 I bought a Fat Boy with a portion of my inheritance from my mother and tricked it out with all kinds of chrome, a louder exhaust (gotta have the sound) and a Road King headlight. I bought lots of leather too - saddlebags, tank bag, etc. You get the picture. A couple of months later I met my future husband, who made me sell it because I rarely rode it. Now, I love my husband, but I really miss my bike. And, Mike - it doesn't matter what kind of Harley you have. It's a Harley.

Looks like tons of fun! My Dad keeps his bikes THAT clean! Its a sin! hehehe

Bike week is March1 here in Daytona. Unfortunately my Dad is away until April... I just dont see myself going and hanging there alone! lmao!! Although one never knows!!

I love bike shows! But, last time I went with my son who was 14 at the time, the scantily clad women were a bit much - my son is cute, but he was only 14 and they were flirting with him!

I'm doing my damnedest to raise him to respect women - but its not easy when he's constantly bombarded by women that don't seem to respect themselves.

Glad you had a nice time.

It sounded like a pretty neat show. I'm not sure I will ever understand the "Harley" attitude. Some Harley riders will snub anyone who doesn't ride a Harley and then to find out some will snub those who buy from the lower models of Harleys? Where will it stop?

Micheal, you have a motorcycle to be proud of. It's just as worthy of attention and the road as the bigger models. Enjoy your Sporty and know that it's an awesome motorcyle.