This is, apparently, my place. It is a wide aisle between the bound periodicals and the Masters theses, lower level, CSUS library. Amongst the pillars holding up this five-story (six if 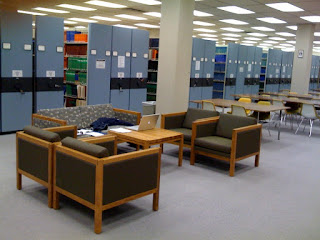 counting this basement) bastion of higher education are several “institutional” tables surrounded by equally institutional chairs. About midway is my place; a little island of quasi-comfort with a small square coffee table surrounded on opposite sides by four indestructible armchairs with an almost matching love seat between them. On the pillar to my left is an outlet to plug in my MacBook Pro for, even with a freshly charged battery good for upwards of three hours, I will outlast it.

I grew up with some notions… about what this is and what that is, about what things are and are not. By the time I entered junior high school, I had been introduced to “social science.” As my education advanced into high school, the social science courses narrowed in scope going from simply “Social Studies” to more specific areas within the discipline. Concurrently, courses in other sciences were also required. Mathematics, chemistry, biology, physics and the like were what I came to believe science was really all about. Eventually I became aware that there is a continuum; on one end are the “hard” sciences like physics and on the other were the “soft” sciences… the social sciences.

I grew up in a world that was dominated by numbers. My father has a Ph.D. in chemistry from Stanford University - among the hardest of the hard sciences and from one of the most prestigious schools in the world. Logic and numbers reigned king; any science worthy of wearing the badge had to have some form of measurement that produced empirical data. It had to be quantifiable. Something had to be counted. It’s not as though I was beat over the head with this pedagogy, it’s just the world that made sense to me. And I took to it. I was a whiz at math and excelled in other science courses as well - all while carrying a distinct disdain for school and education in general.

My baseless dislike for social science continued for many years. It’s not that it dominated my every waking moment, but the backdrop always remained - how could it be science if there isn’t an answer. Sure, hard sciences are driven by hypothesis and theory (a theory, in scientific terms, is supported by enough evidence that it is considered a fact until disproved), but even when the “answer” is unknown - it is knowable. That is, with the proper data, it is possible to know the answer empirically. There is no way to ever know for sure why people behave the way they do, what “love” is or the existence of God, for example.

So what are numbers anyway? They are nothing unless associated with a thing. They represent only quantity and say nothing about quality. If I have two things and put them together with two more things, I’ll have four things. True yesterday, true today and true tomorrow. Two plus two always equals four. But what if I have two apples and put them together with two oranges? I still have four things, but the number itself says nothing about those things… for that we need more than just numbers - we need words.

Communication studies are absolutely toward the soft side of the science continuum. Indeed, the degrees offered in Communication Studies at CSUS, BA and MA, lack the trailing “S” denoting “science.” I am working on a Master of Arts degree - and I never even gave any thought to the fact that I am studying to be a social scientist. But it’s even more ironic than that; I am leaning toward the qualitative end of the segment of the spectrum that is already on the “soft” side of the science continuum. I have turned a complete 180 and never even saw it coming. I gravitated towards qualitative reasoning over quantitative counting despite thinking I was built to think otherwise. Communication studies employ a number of quantitative methods and processes, research that requires statistical manipulation of empirical data. But on the qualitative side there is observation, reporting and an attempt to draw parallels to universal understanding.

So today, while working on this quantitative research paper, I am ever observant - from my little island in the basement of the CSUS library. It seems to be what I do.
Posted by Michael K. Althouse at 1:14 PM

Sounds like you were thinking about the library and your surrounds more than that thesis! :)

Thank you for this. Your post made me realize that it is OK to have different academic interests than those you originally set (or what is expected). Like you, I am constantly scrutinizing my academic choices.

Reading your posts appeared as though you opened up on the inside and "let the colors in".... perceptional change, did you journey inside a tad? And find a another side of you? Well it came out and it was colorful.

i know what you mean

I remember my Masters thesis turning and evolving from such moments...

ps, why does the battery on a mac book pro last less than 2 hours? It didn't last my flight to or from Tel Aviv - very frustrating when you want to work

It's a new battery. My original one met with an untimely death - Apple graciously replaced it free of charge. But then I have come to expect such excellent customer service from Apple.