I have acquired, in my two score and almost seven years, a number of “things.” Much of that time, I placed an inordinately high value on those that were material… they could be bought, or sold. Or lost. Indeed, in that same period of time I have lost many if not most of those things. And the truth is that although I placed an inappropriately high value on them, the evidence shows that those things were not all that valuable after all. I rarely ever think of most of my former possessions, but I often think of the nonmaterial, intangible and not-for-sale-at-any-price variety of “things.” These are the things that I value most today.

I used to be able to count my “close” friends with just my fingers… and with a few left over. While I was hospitalized and fighting for my life nearly nine years ago, those friends were there, and some traveled great distance to be there. Those I thought were my friends couldn’t be bothered, but in all honesty it might have been the same story for me if our roles were reversed. They were superficial friendships of a decidedly more seasonal variety; they were not built to last. It was a reflection of the materialism my life was based upon and I should not have expected any more. But that experience started a paradigmatic change in my perspective that, nine years later, has proven to be far more valuable than any material “thing.” 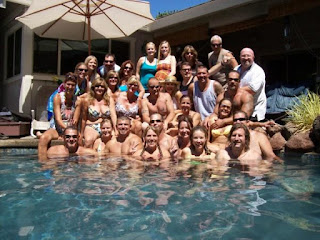 My friends today come from very diverse backgrounds. They range from high school dropouts to Ph.D.s. They are white-collar and blue; gay and straight; religious and secular; liberal and conservative; and from many different ethnic backgrounds. Yet all live by the principles of integrity, humility, honesty and a host of other universally laudable characteristics. Many people live by the intention, the desire and even the belief that these are the values they stand by, but the day-to-day truth is a far different story – it was once my story. It is not necessarily the difference between badness and goodness, but very much the difference between awareness and unconsciousness. I was on autopilot, seeking only to secure my comfort, my family’s and, if it was not too inconvenient, my friends’. Even my attempts at altruism were subconsciously self-serving.

Since those lonely days in the hospital, and many of those during the following two or three years, I have experienced a major change in my awareness that has necessarily changed the way I look at the world and my place in it. As a result, the quality (and the quantity) of the friends I have today matches that of the few I was lucky enough to have from those days gone by. And the qualities I have nurtured – those that I believed to have all along – have attracted those who live in the same realm. It is not that I am a better person now than I was then, rather, I am aware of who I am and I try to live up to those principles. In reality, they are qualities I possessed all along… that is, my belief was not wrong, I just wasn’t executing. My aim was way off.

My friends, like me, are successful. Some are pursuing higher educational goals, some are skilled in the trades, some run households, some are business owners and all are on a mission - a mission to succeed. They do the work; they have a clear idea of just how significant and insignificant each of us is. They all command respect not because of money or power or privilege, but because they live their lives based on those universal and timeless ideals that defines the best in humanity. Despite the diversity and difference in their backgrounds, all are in the same “class;” and much of that is the eschewal of traditional societal class separation. They truly are and view others as “classless.” And I am proud to be amongst this group of classless friends.

* Addendum:
My hospitalization was not some kind of friend or loyalty "test," I recounted it as an illustration to make a point. I have friends who were not able to be there physically for a number of reasons... but they supported me and still do.
Posted by Michael K. Althouse at 11:12 PM

And so you know just how rich your life is. You are a lucky man. :)
Pat from NY

NetChick sent me to say hello, and I'm glad she did, because it's been far too long since I've read your blog.

You're lucky to have the friends you do, but I suspect they're also lucky.