From Bars to Stars

Many, many years ago, I used to in hang out bars. Mostly the same bar, my neighborhood bar… a “dive bar.” It was familiar; I knew the bartenders and many of my friends could be found there. As I moved, so too, eventually, did my regular haunt. It’s not as though I would patronize one establishment exclusively, but all had certain elements in common: a pool table, a dartboard and an adequate selection of, um, refreshing beverages. As circumstances in my life dictated (or allowed), my presence at these establishments fluctuated, but after some time, some of these bars throughout a period of my life became my “Cheers,” and everybody knew my name.

Although it was an interesting and somewhat memorable phase in my life… and to some extent it was enjoyable, it was superficial. It didn’t have to be, but for me it was. The relationships built at these establishments were based on very narrow criteria; as long as we shared a love for the bar scene, i.e. beer, pool, darts and small talk, we were fast friends. From time to time these relationships expanded beyond the bar, but it would most often be a relocation of the same thing, just off-site. I didn’t intentionally move away from the bar society, but after some time I guess it just got old. Too much of anything can do that.

And I can’t say I particularly miss it, partly because I have replaced it. I now hang out at coffee shops, albeit not with the regularity or frequency I used to go to my “home” bar. Though it is true I have a distinct preference as to which coffee shop I call my own (‘Nothing But Recovery’ - it’s not “mine,” but the owner is my friend), I patronize many and feel at home in all. This one, however, is where everybody does know my name. I buy food and coffee drinks here, but, generally, that’s not why I come. I come for the atmosphere and at NBR, I come for the social aspects. It is different here for other reasons as well – I can’t usually open my MacBook and start writing here because friends too often interrupt me. It’s not a bad thing – it is, in large part, why I come. But there are occasionally quiet moments such as this when I can write.

At the other coffee shops I patronize, and yes – many are Starbucks, I go for the ambiance. Starbucks seems to have nailed the formula, but there were others before and Starbucks sure doesn't do it best. As a matter of fact, the corporate, mechanized rigor has done much to destroy the casual nature of a Starbucks visit. Drive-throughs, an assembly line-like “manufacturing” process and WiFi-for-a-fee are but some of the drawbacks that come with a Starbucks experience. Yes, the coffee is still good and yes, it still has an atmosphere conducive to writing… and yes, they still have an appeal that can be counted on like a McDonalds Big Mac, but in the process the “neighborhood bar” aspect has been lost. 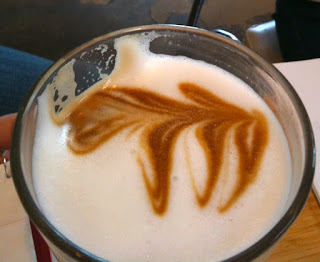 Near California State University, Sacramento, is a little place called Tupelo Coffee House and Roasting Company. It is literally a stone’s throw from and on the same block as a good-sized Starbucks. Although I have never been inside that particular Starbucks, I know it – it is virtually the same as all other Starbucks. Tupelo is different. Different better. The drinks are better not only in taste, but in presentation. Served in glass vessels with a 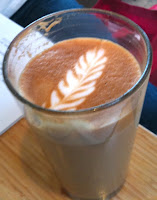 decorative topping in the foam, they follow the creative and welcoming atmosphere. And nothing says ‘we want you to hang out’ more than free WiFi access. But there is more and it is difficult to present here with just words and pictures. Like NBR, it has carved out a niche – an oasis in the desert of Starbucks. When given a choice, I choose the independents… those who have a vested interest in my return business, who like what I like, who come to work for the same reasons I come for the coffee. I really don’t think Starbucks cares…
Posted by Michael K. Althouse at 5:42 PM

Glad to see you're still enjoying all that life has to offer :)

It's late and I'm catching up.

So, have a great day ahead and keep living strong.

Spending some time in a coffee bars can be good fun. Some of the London ones can get overloaded though so its sometimes best to duck down alleys and find off track ones.

My recent favourite was a studenty one near to the Library in Copenhagen, when I was spending quite a lot of time over there on business.