In the Eye of the Beholder?

My eyes are pretty good. Considering my age and the abuse I’ve put my body through, I am only slightly nearsighted and I do not need reading glasses yet. And it does not appear to be as though my enduring DMV restriction-free eyesight is a genetic gift from my family, the vast majority of whom needed corrective lenses much earlier in life. But my eyes are certainly not immune to the effects of aging and although glasses are still not necessary, they do allow my 47 year-old eyes to see the world more clearly. For the past six months or so, I have grown accustomed to having them on my face – especially when I’m driving.

The difference is, well, clear. Instead of relying on memory or a GPS guidance system, I can read the highway signs before I am too close to make a decision. Those large green blobs lining the sides of my street are actually individual leaves on trees, each of which I can see distinctly when wearing my glasses. It’s also far easier to spot police cars… not that I would ever have any need to know where they are. Still, I can get by without them and yesterday after one of the lenses popped out, I had to do just that.

It was nothing more than inconvenience, really. Since I was out running errands anyway, I made a stop at my local Walmart Supercenter to get my glasses repaired. On my way home, after they were repaired and cleaned, I encountered a deluge that reduced visibility to near zero. It was at the tail end of a storm that dumped rain on California for most of the day, but when I left my home in the late afternoon it looked like the storm was done doing its thing. Those lingering, localized cells, however, can be potent. This one was very much so.

It got me thinking. About abstract reality. About power. About how small we really are. We are at the top of the food chain – the most highly evolved species ever to live on planet Earth, but for all we have conquered, that deluge could not be stopped. We were at the mercy, yet again, of a power that we cannot duplicate or mitigate. And it was impressive. I have always marveled at the power Mother Nature can wield. Bad weather gives me an adrenaline rush. Although I get no pleasure from the human suffering that these natural phenomena can cause, I can’t help but respect the destructive – and creative – power nature holds. It does not discriminate; young and old, rich and poor, black, white and everyone in between, Mother Nature will have her way. And she does not care. 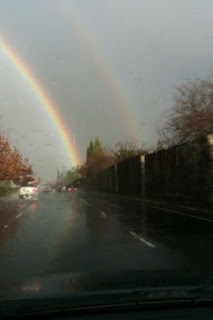 As rapidly as the rain appeared, it left leaving a spectacular double rainbow in its wake. "For what purpose," I wonder. Yes, I know, it is an explainable, physical phenomenon. Science can tell us exactly what causes a rainbow, but it can’t tell us why we find it beautiful, why it gives us pleasure. What makes a rainbow, or majestic mountain vistas, or a sunny California coastline, or the vastness of the Sahara Desert, or a sunset in all its pastel glory, or any of the other natural wonders that are everywhere, profound? Since the beginning of human history, men and women have written about it, composed music about it, depicted it in paint and marble, wood and metal and yet there is no end to the wonder of nature.

Beauty exists. It cannot be measured or otherwise quantified, but its quality is universal. Opinions might differ, but to say it’s solely in the eye of the beholder relegates the likes of a double rainbow to nothingness. It is much more than sunlight refracting through raindrops to create a visual image. It is profound. It stirs us. Beauty can be many things, but the idea that it exists in my mind and my heart alone as a unique concept is false. It is universal. It is real. And it is not just in the eyes of the beholder, whether those eyes need glasses or not.
Posted by Michael K. Althouse at 11:39 AM

Michael, I envy you the clarity of your vision as we are at a similar age.

Mother nature is awesome indeed. The rainbow is a magnificent sight and inspires hope.

Yes, beauty is in the eye of the beholder, be it nearsighted or not. LOL