Those who frequent this page and those who know me also know that one of the many facets to my personality is that of a motorcycle enthusiast. Although my love for motorcycles is currently concentrated in a particular area, ever since I first became aware of their existence, all manifestations of motorcycling have held my attention and fascination, now going on more than 40 years. Street, dirt, track or stunt, it matters little – if there are two wheels and a motor I’ll stop and take a look. My current steed is a Harley Davidson Road King, an apt moniker for this big, powerful street cruiser. 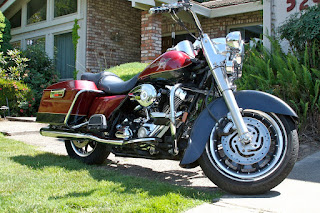 And as one might surmise, the Harley Davidson “culture” is not only the one I am currently enamored with, it has been a latent draw on me ever since those days of boyhood discovery. It’s not just the freedom or the oneness I feel when riding any motorcycle, when riding my Harley it’s also about patriotism, rebellion, history and a host of other intangibles that make riding a Harley a truly different experience. The same could be said for a host of other customs that are inspired by Harley’s big V-twin design, and perhaps to a lesser extent for all other large street cruisers that most manufacturers produce; but the heritage that comes with a Harley Davidson is impossible to replicate.

I am not a “hardcore” biker. I am not a member of a gang or motorcycle club. I just ride. I do, however, wear black leather when I ride and my motorcycle is loud. I like it that way and though others might not, those who would not otherwise be aware of my presence on the road will hear me long before they can swerve into my lane. But it’s more than just safety. The copious amounts of chrome, the shining paint and all the other ancillary accessories that create the image have little to do with getting from point A to point B in one piece. Indeed, often points A and B are the same place: my garage. It’s not about the destination.

Today my destination is the Sacramento Convention Center and though the weather probably permits it (only a slight chance of rain today), I will be leaving my bike in my garage. The absence of my bike, however, will not be noticed in a veritable sea of thousands of motorcycles – the vast majority of them Harley Davidsons. This year’s annual Sacramento stop of the Easyriders Bike Show Tour will be my forth in a row, but this year I am not merely attending, I am covering the story for the Sacramento Press. And to comfortably transport my camera gear and computer, I am compelled to drive.

When a friend at the Sac Press asked if I would like to cover the Easyriders Tour, it didn’t require much thought. I was going to go anyway. I was going to shoot literally hundreds of pictures anyway. And I was going to write about it anyway. The only difference is that now I am also going to write a feature news story… I think I still remember how to do that. And of course, with a press credential I’ll have ready access to those I need to interview – and I will not have to pay the admission fee, which is the only compensation I’ll receive for this freelance venture.

Okay, that’s not exactly true either. There is far more than just monetary “compensation.” I write for the same reason I ride - because I love it. That I can share this experience with those outside the motorcycling public is just icing one the cake. So I don’t get to ride my bike there today… it’s okay, it might rain anyway.
Posted by Michael K. Althouse at 10:35 AM

It's good to know you will be combining business with pleasure today and that you'll be okay with doing so.

That's an impressive bike too. My neighbour has a Harley (black, dunno what kind). It certainly makes a distinctive note as it travels along the street.

And Hiya, today Netchick sent me.

First visit~ Was enjoyable and I love your music choices on your playlist. Takes me back...to many a Journey and Boston concerts. :)