I rarely watch television advertisements, opting instead to use the features of my DVR and zip right through them (not as zippy as I would like – the Comcast DVR I am stuck with is only slightly better than no DVR at all, but I digress…). Because of this, the only time commercials get any airtime in my home happens when the TV is on in the background – when I am not paying attention to it anyway. But there must be something at some level of consciousness that is paying attention because I heard something this morning that had me using that DVR to zip back to listen to a commercial. Unbelievable? Yes, however, the commercial was even more so.

L’Oréal is currently airing television advertisements for a new facial skin care product, Go 360° Clean. Billed as the “1st Deep Pore-by-Pore Cleanser,” it comes with its very own “Scrublet.” 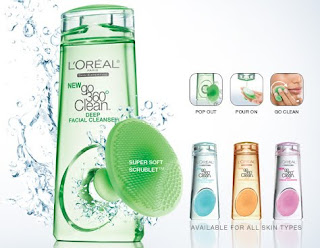 Working away in my office one room away from the droning TV, I did not hear any of this. It was just the standard run of the mill, daytime personal hygiene product commercial - blah, blah, blah. What made my ears perk up was one of the benefits this new cleanser provides to its users. After rewinding back to the beginning of the 15-second spot, I viewed the entire commercial, this time paying very close attention. Not believing what I thought I heard, I needed confirmation. And I got it.
The spot is obviously aimed at women and women, apparently, are very interested in being 100 percent sure that each and every pore is thoroughly clean; hence, the “Scrublet.” And it's not just about women... I mean really, who doesn’t want clean pores? I certainly do. The scrublet gimmick, the thorough cleansing appeal and the beautiful face model with the absolutely flawless skin are all standard fare when it comes to marketing this sort of product. None of it is particularly noteworthy and none of it captured my attention. But in this spot there was something new; this benefit mentioned earlier was one I did not know was in demand. I now know that I must concentrate on yet one more attribute that defines beauty – small pores.
Yes, that’s right. L’Oréal’s Go 360° Clean will provide its user with, and I quote, “visibly smaller pores.” I never knew that pore size, or the appearance thereof, was a measure of beauty. But apparently while I was off in the twilight zone not paying attention to TV commercials, it became one. Like pretty much every other measure of beauty created by those selling us products to create it or maintain it, the appearance of pore size is now of critical importance where beauty is concerned. And now that I think about it, it makes perfect sense. Who in his or her right mind would even think about walking around in public with large pores?
These marketing folk are clever. Although it’s difficult to tell when it was that the pore size issue came up, it is possible that the extreme close-up photo of Sarah Palin on the October 4, 2008 cover of Newsweek helped to identify just how important it is to have well-behaved – and beautifully small – pores. Whatever would we do without these manufacturers of beauty? Everyone would be going out in public with these huge pores, disgracing themselves and everything they stand for. I, for one, never gave much consideration to pore size, actual or visible. Thank God for the good folks at L’Oréal for bringing this to our attention. The scrublet has provided the solution to those of us who now know what a profound problem large pores can be.
Posted by Michael K. Althouse at 12:53 PM

hee hee... How come you were not aware of how important large pores can be...!!
Oh! man... And now that I think about it -oups! Must do something serious with these ones!

Great post- it's amazing how we can write about anything... I mean, there is still so much to write, so well, about.As YOU do!

if you wanna talk about sarah palin's pores, i've spent so much time with that cover that we could create a new commercial for this L'oreal product.

But, more on point, pores have always been important! big, visible pores are not pleasant when you get up close, and when the object of your affection is up close, thats exactly when you don't want them to be thinking unpleasant thoughts....

Also, I'd never heard of this product before, and now I'm going to the drugstore to get it.
You may not have meant to help them sell, but sell you have. :)

It's clinically proven - says so right on the website. They wouldn't say it if it wasn't so.

We have a UK advert for hair product which does something marvellous but part way through it there's a small flash onto the screen which cabveats that the actress explaining the product is also wearing hair extensions.