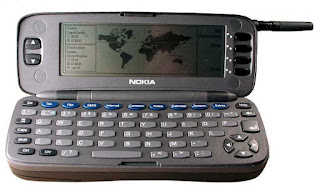 The first iPhone was released in June, 2007. At the time, I was using a Blackberry, what was considered to be the most advanced phone of the time. It was not, however, the first "smart phone" I ever owned. A few years earlier, Nokia released its version of a smart phone - a phone that could not only send and receive email, but one that could also access the new-at-the-time World Wide Web - about ten years before the iPhone. The Nokia 9000 Communicator is sometimes recognized as the second smart phone, behind HP's hybridization of their palmtop computer with a Nokia phone. Without splitting too many hairs, it's safe to say the Nokia 9000 was a the first fully integrated smart phone. And I had one in 1999. I was working for a small cellular retailer and the rep from Nokia gave me one. It had already been superseded by a more advanced model, but it did what no cellular device before it could. 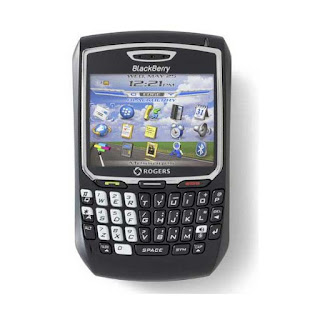 Fast-forward through a series of excellent Nokia, Ericsson and Motorola phones, each with more features and more power, when the Blackberry emerged as the first phone that could really do email well. It also had a full QWERTY keyboard. That was my phone when we rang in 2007. When the first iPhone launched, I was impressed, but not to the point of running out to get one. I didn't even bother to go to a store to see one as I was happy with my Blackberry. It had some web capability (remember that the web was far less robust than it is now) and I had no "need" for any of the other stuff the iPhone offered. That word, "need," can be interpreted in a number of ways, however, and part of the genius of Steven Jobs was not just to foresee what the market would want, but to actually create that need.
It was not until I actually held one in my hand that I needed one. Okay, I wanted one. The design was beautiful, the engineering was precise and the interface was pure magic. It happened at a vocational event for a local high school while I was working as a reporter at the Colfax Record, manning our information table. The representative at a neighboring table had one and was using the exquisitely soft microfiber cloth that came with every iPhone to wipe her already pristine devise. It was more than just mere adoration, she looked as though she truly loved this handheld device. And she actually let me hold it, just for a minute. It was hefty, solid, not at all chintzy like so many cell phones had become. It was sleek, glimmering and tight; every seem, every joint and every transition was perfect and as an entire unit, it was in perfect harmony with itself. Nothing didn’t belong. When I handed it back, she immediately wiped off whatever fingerprints I might have left and set it down in front of her, gazing upon it. 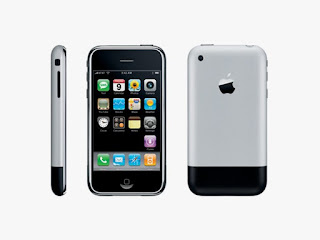 I bought my first iPhone days later, but I should make a couple of things clear. First, I am exaggerating my exposition neighbor’s adulation. It was certainly novelty, but her love for her iPhone was nothing like I just described it. However, the beauty and engineering of this material thing should not be underestimated. It was exactly as I described it and, without getting too ahead of myself, so has every iPhone since – right up to my current and brand new iPhone X. At the time, I was transitioning over to from PC to Apple Mac computers as well. While the Apple product über-integration wasn’t a “thing” yet, the quality and stability of Mac OSX was becoming legendary. My Blackberry served its purpose, it did email really, really well and I held it up as the gold-standard of its time – I still do. But that first iPhone, archaic by today’s standards, did email as well, but it also did so much more.

Since that first iPhone, I have upgraded to every major version since. I have been an early adopter and sometimes, like this time, a first adopter. Once, and only once, I did not pre-order and actually stood in the ridiculously long release day line at the Apple store. It was not all that – it is not an experience I’ll ever repeat. I do not have to be the first kid on my block with a new toy. That experience revealed the ego attached and also that, for me, it’s not about, “hey, look what I have and you don’t.” I like my toys, but they don’t define me. And my newest toy? Yes, I like it, too. The iPhone X is a step apart from and beyond what the iPhone has been for the past several generations and, in one key respect, beyond all iPhones since the very first.

There is no “home” button. Actually, the home button on the iPhone 7 and 8 is just a “virtual button,” a mere indentation in the glass that resembles a button, but the “click” and the feel are simulated, there is no actual button. But the iPhone X dispenses with any pretense, initiating new conventions for accessing the contents and linkages in the flagship device. Personally, it was a natural progression, an outgrowth of one convention to another. It did not take long at all to “get used” to it. Indeed, it was as though I already was. The new conventions – swiping up and such – are already part of how the later generations of iPhones operate. The iPhone X just takes it a step further. 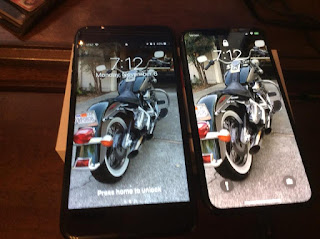 Regarding the phone itself – it’s an iPhone. It works and it works exceedingly well. This one is faster and sleeker than its processors. The display is magnificent, but to really appreciate it, lay it next to an iPhone 7 Plus (which also has an excellent display). It is truly remarkably realistic. I do have just one gripe, if it can even be called that. While the screen is taller than the “Plus” versions of the iPhones 6, 7 and 8, it is a little narrower. I wished they would have kept the width of the “Plus” version phones. Having said that, it is nice to have a phone with a larger overall screen fit in my hand. As much as I loved my iPhone 6 Plus and 7 Plus, it was a big phone.

I have more than a few friends asking if it’s worth it to go with the iPhone X or settle for an iPhone 8. While I have no direct experience with an 8 (however, both my son and my girlfriend have an iPhone 8 Plus), I think the answer is couched in the "need vs. want paradigm." The iPhone 8 and 8 Plus are, technologically, very much as robust as the iPhone X. Also, the form-factor is the same as the iPhone 7 and very close to the iPhone 6. The iPhone X is a departure – if you are into the newest stuff, like I am, then by all means, get the iPhone X. If you are just looking to upgrade and older iPhone, the iPhone 8 will amaze you, even over an iPhone 7. And, of course, the iPhone X will still be amazing when the iPhone 11 is released next year. Amazing and cheaper. The iPhone X is not a logical choice, but not everything is logical. Some things not only defy logic, they transcend it.
Posted by Michael K. Althouse at 8:40 AM