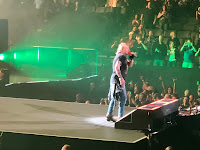 Last night I was fortunate enough to be gifted two tickets to see one of the latter iconic bands of my youth, Guns N’ Roses. The GNR story is, in many ways, typical of the excesses of the time. They hit hard and flamed out almost as fast. In less than 10 years they went from the very top of the hard rock world to non-existent. They came and went, flashed in the news and went away for years until just last year, guitarist Slash returned to the band and their current tour, “Not in this Lifetime” took off. The Sacramento date was announced a while ago - I knew they were coming. I saw them back in their heyday. I was good. Pass. My girlfriend and I went to a lot of concerts this year, we were pretty sure we’d seen it all. And, it was GNR - not exactly on the top of my “must see” list. So… the seats were good, it was free and we had no other plans last night; with about a day’s notice we placed another concert on the agenda, thanks to an old and dear friend.

Also, yesterday, one of my very early rock icons passed away. Malcom Young, AC/DC’s driving and creative force died way too soon at 64 years-old. Those who are less familiar with the band might be tempted to say that his younger brother Angus was the leader, or maybe lead singer Brian Johnson (after original lead vocalist Bon Scott died tragically in 1980) was the driving force. While all played their roles, and while both brothers received writing credit for all those timeless hits, Malcom was the glue, the driving force behind AC/DC. The tweets coming from so many in the music business acknowledge that very fact and how, because of his song-writing, the loss is that much greater. Slash and the rest of the members of GNR dedicated Bob Dylan’s “Knockin’ on Heaven’s Door” to Malcom Young, but they did more than that. They inserted AC/DC’s “Whole Lotta Rosie” into their set last while an image of Malcom Young was displayed bigger-than-life on the screen behind the stage. 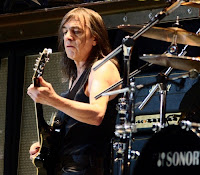 I never saw AC/DC after Bon Scott died. While I fully acknowledge what Brian Johnson brought to the bad, and I recognize the iconic hits that were created with his vocals as just that - real, classic, rock - I was just too connected to Bon Scott as the voice of AC/DC. I could not let that go. A lot of rock stars - my heroes - have passed in the many years since I came of age. Some died due to their own excesses, their hubris; others, like Malcom Young, died due to more natural causes, even if those causes came at an unnaturally young age. There have been many, far too many to name, but Bon Scott hit me like none other until just recently when Tom Petty died of cardiac arrest, also young at 66 years old. However, I did see AC/DC twice in 1979 and I remember it like it was yesterday. Every one of AC/DC’s early albums, up to and including the first two Brian Johnson albums, are on my iPod, always on whatever playlist I have going. 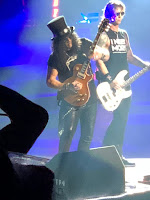 Guns N’ Roses were never what so many other bands were (or are) to me. I wasn’t too concerned about missing the show. It just didn’t really matter to me, especially since the last concert I saw was at the same venue - and that was none other than Tom Petty just a couple of weeks before he died. I like GNR, I liked them enough to see them in their heyday, but my expectations last night were not high. I was blown away. They were tight, the musicianship was better than it was 30 years ago and Axl Rose, whose excesses are (or were) the stuff of legend, belted out his lyrics like a man half his age. All told, the band played a three-and-a-half-hour set - straight through without a break. And, to be clear, with three original members (Axl Rose, Slash and Duff McKagen), this is Guns N’ Roses, despite additional or new personnel. Too many “classic” touring bands have just one or no original members. I was impressed, and after all the performances I’ve seen this year, that is saying something.