I haven’t written here in quite some time. To say that a lot has happened between then and now is probably the understatement of the year. But mostly, it’s what has happened in the past three and a half days that has prompted me to write this. So much has been running through my head – all these thoughts turned words turned insight and then lost, never seeing a written page. Indeed, this is but a feeble attempt to recover what was lost and, if experience is any indication, it will prove not just cathartic; the mere act of writing will produce more, reveal more than I can think of or remember now. This is the start… 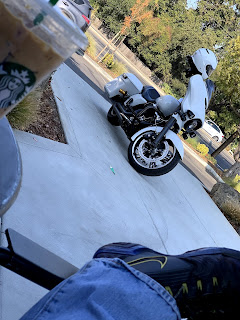 Today – Friday, November 16th – is the first day I have ridden my motorcycle since last Tuesday afternoon. The ride today and the ride then are as different as night and day. Then, I was on a mission. I had to be somewhere and I had to be there fast. It was late afternoon with all the traffic associated with any afternoon commute. I knew what it would be like and I did not have the time to navigate it with my car. It was not a pleasure ride, it was not a utilitarian ride, it was an emergency and every ounce of skill I have gained through more than 100,000-plus miles and who knows how many years of experience was put to its test. I was literally racing to the hospital where my youngest son was taken after a serious accident on his motorcycle. During his utilitarian commute home from work. Like any other day. And it just happen. Some idiot crossed his path.

The next three days up until this morning were bad. He had two major operations to repair the trauma done unto him – an open femur fracture, an open tib-fib fracture both on his left leg and a really ugly fractured humerus on his right arm. Each a  serious injury on its own, together they could be life-threatening. While his life was not in serious danger due to the fast response and excellent care he received at the very nearby hospital, he is still in for a long recovery. His bike is, of course, history. There is much more, but this morning he was able to stand – briefly and with a lot of effort and help – twice. Tomorrow should be better, and so the long process will go. The rest is his story and in time he will tell it in his way, but for those of us who ride – and he acknowledges this – we know it’s never a matter of if, but when. 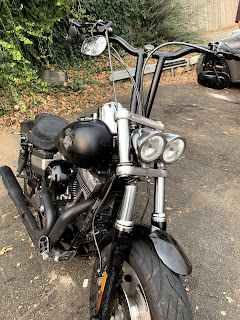 While Matthew is absolutely his own man, we do possess similar qualities, among them is an all-or-nothing attitude. We ride safely, but it could be described as aggressive, too. And on a motorcycle, the last thing any rider should be is timid. Timidity is more dangerous. This is not to say his accident was in any way caused by aggressive riding – he had the right of way, he was doing everything legally and properly – but he was surprised by the stupidity of some idiot driving a car. I ride a lot – a lot more than he does – and I see it all the time. Experience has me anticipating all the idiotic things drivers can do, but I can be and probably will be surprised one day. One cannot predict everything. Would I have anticipated the car that took him out? I don’t know – maybe, maybe not.

The point of this has to do with my thoughts this morning as I was riding back to the hospital – the same exact route I raced through last Tuesday. Obviously, it was not an emergency. There was no hurry. I knew the state he was in today and it is significantly improved over just yesterday. I can describe my ride this morning as… muted. Still aggressive in my wariness of those driving, still keeping my distance between them and me, but today it was in a different way. Today I was not trying to keep the potential risk in my rear-view mirror. Today I was content with keeping that distance in front of me. I still feel it’s best to be in front, that I have more control over potential risks that way, however, I think that maybe getting there might not always be the best way to keep that cushion. Maybe I could slow down a little bit. Maybe the utilitarian riding – my commuting – is not a risk worth taking. Maybe.

Motorcycle wrecks are scary. In my kid’s wreck, the driver that caused it walked away with no injuries. I have known people who have lots of experience – much more than I have – who were not as lucky as my kid. Some have died doing nothing “wrong.” For the last three days, I have wondered whether riding at all is something I still want to do. I have come to the conclusion that it is, but my “style” has changed. In the short distance I rode today, I could feel it. I don’t want to quit – it is in my blood. But I don’t want to be another statistic, either. There is no way to absolutely protect myself from the stupidity on the road these days. But I can reduce my exposure. To that end, I will do what I can.

Gotta admit, I've been on the fence about riding anymore. I'm not getting any younger and a wreck even a quarter as bad would kill me. It just doesn't feel worth it now, and the more stories I hear like your son's, the closer I am to selling.

And damn, I hope his recovery doesn't suck much...