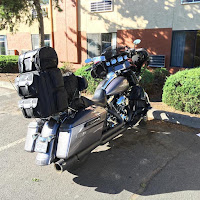 For the past few years, this time of summer involved an extended road trip with my motorcycle. For the past four years in a row, the destination has been Sturgis, SD, for the annual grand-daddy of all motorcycle rallies, the Black Hills Motorcycle Classic. While that has been the destination recently, it is but a very small part of the journey. My first year there, in 2014, that destination was the primary focus of the journey, and it lived up to everything (and more) I’d heard about it - the legend - and it was every motorcycle rally I’ve ever attended, but super-sized. I have experienced a lot of motorcycles in one place before (many times), but Sturgis was like nothing I’ve ever experienced. The stories were true - upwards of a half-million motorcycle enthusiasts descending on one small South Dakota mountain town for about 10 days in early August. In 2015, that spectacle was pumped up by a factor of two for the 75th annual rally. 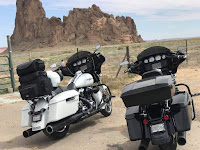 That first year, the destination was the focus. However, every year since, including the mega 75th, the destination was not the story. Sturgis, for me, is a been-there-done-that kind of thing. It’s not that I don’t enjoy the gathering of so many like-minded souls, but I am still not a people person, I still do not like cluster-fucks and, although the event is worth enduring some of that - indeed, it is unavoidable - it hasn’t been the focus of my annual pilgrimage since that first year. The focus has been the pilgrimage itself, and each has been unique, each has presented different experiences, different routes and each stands out on its own. The only thing each of my four journeys has in common is Sturgis itself.

I could go on and on about what the mecca of (primarily American) motorcycling means to me, to the industry, and the like, but what makes Sturgis special, and why it was selected for the annual rally so many years ago, is the magnificence of the Black Hills and everything else within a short ride of Sturgis. And, while I prefer to explore new roads - especially those less traveled - some are worth riding over and over again. There are numerous roads in that part of the country that fit that bill. Although it would be nice if there were not literally hundreds of thousands of others riding those roads when I am, the destination, even during rally week, is worth it. Add to it the spectacle that is Sturgis during rally week, and it’s a good time even for someone like me who doesn’t really like “people.” 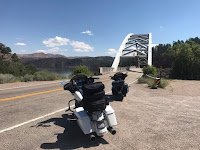 But if it was just that spectacle and nothing else, it’s a hard pass for me. Like I mentioned above, been there, done that. However, it is so much more - so much “so much” more that I anxiously await getting on the road all year long. That day for me this year is less than 48 hours away - a bit later than I wanted to hit the road (I’ll get there when the “festivities“ are just entering a full-on 10-day frenzy), but it’s the road, not the destination that makes this trip worthwhile year after year. This year I’ll be riding there and back solo. I have done that before (in 2016), but this time around I am taking on a challenge that I ordinarily would not, but it’s a bucket list thing I want to be able to say I’ve done. 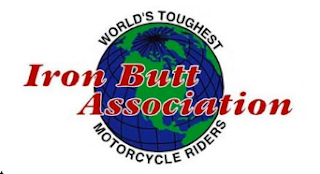 My first day will be more than 1,000 miles from my home near Sacramento to Silverthorne, CO - just past Vail. My route will take me on much of the same route I returned home last year, but, obviously, going the other way. I should be on the road for about 16 hours. When completed, with the appropriate documentation, I will have earned a “Saddle Sore 1000” (1,000 miles in 24 hours) from the Iron Butt Association. The IBA is an organization dedicated to ultra-long-distance motorcycle riding. The next day I’ll ride the 500+ miles to Sturgis, completing the entire 1,500+ miles in less than 36 hours for a “Bun Burner 1500” (I know, I didn’t make up the names…). That second leg will take me on roads I have not yet traveled, but if it’s anything like other parts of Colorado I have ridden, it should be spectacular. But there is a rub… 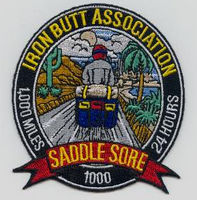 To make these distances in the time allotted (and there are much, much more challenging rides that, properly documented, the IBA recognizes), it is necessary to travel at a pretty good clip. The IBA stresses rider safety and they are adamant that these rides are not “races,” they are endurance challenges. In fact, they will not certify a ride in which the average speed exceeds the speed limit. That doesn’t mean normal speed excess liberties that we all take will disqualify a ride, but a several hundred mile stretch at 100+ mph will probably disqualify a ride. However, gas stops take time and those speeds kill mileage, so it’s a bad idea if only for that reason. But it is necessary to stick to highways that have high speed limits - 75 to 80 mph is ideal. Of course, that means using the Interstate Highway System as much as possible. And, those roads are typically boring. 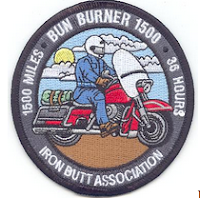 But not all. US-50 through Nevada and Utah before merging with I-70 is a nice ride. It’s not crowded, its scenic and it’s fast. When I road it last year I was amazed at the variety of the terrain and how absolutely stunning it was, sometimes in its grandeur, sometimes in its starkness. One down-side of doing it as fast as I am is that all those times I stopped to “smell the roses,” sometimes right in the middle of the barren highway, will not be possible. To quote the immortal words of Jerry Reed, I “have a long way to go and a short time to get there.” I will be, in fact, “East Bound and Down.” I have five gas stops planned at a little less than 200-mile intervals, but I'll have a one-gallon can of gas with me, just in case. 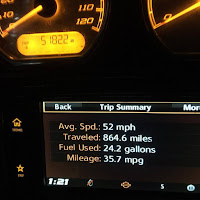 I will arrive in Sturgis on Friday afternoon. Even if I fall short of the 1,000 miles in 24 hours, I’ll easily make all 1,500 miles in two days. My single day max is almost 900 miles in about 16 hours, and I’ve ridden back-to-back 700 miles days more than once, and none of those rides were particularly taxing. I am fairly confident that this goal is achievable, but once I get it, I will be done. That’s not to say that I’ll never ride that far in one day again, I most likely will, but I will probably not bother with the necessary documentation that the IBA requires to “certify” a ride. This is a one and done thing. I like riding roads less traveled, at my own pace and go where I want in the moment. I like to get lost and I hate rides along pre-planned routes. But I do and will log a lot of miles; this time I have to opportunity, the time and planetary alignment to get the patch and the pin. The question is not “why?” but “why not?”