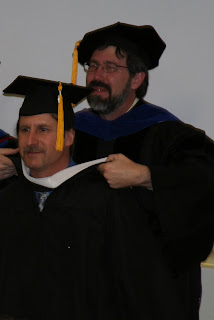 These photos are from my Master's Hooding Ceremony At California State University, Sacramento, eight years ago. Although I was not yet quite finished with the degree requirements (my degree was actually conferred one year later), I was well on my way. I had six years clean (and/or sober, for those so inclined), I was in a new relationship and I was on my way to Louisiana State University  in the fall to begin work on my Ph.D. The future looked bright indeed, however, there were dark clouds on the horizon and the storm that came was not only predictable, it was predicted - I saw it, but ignored it.

I remember, as I approached my seven-year recovery anniversary (August 6th, 2004 was the first day of my continued abstinence from all mind and mood altering chemicals), I was "warned" by those in recovery of how “hard” the seven year mark was. I didn't believe it then (I still don't - we only hear the horror stories, most "seven years" are perfectly mundane), but seven to 10 years clean was, for me, a monumental struggle on several levels. It seemed everything in my life was way harder than it needed to be, that everything was falling apart and that the Universe was out to get me. That “new” relationship turned into a 2,200-mile Sacramento-to-Baton Rouge “long-distance” relationship turned into a long-distance engagement turned into a long-distance marriage and finally into a long-distance divorce, all while I was working on a Ph.D. at LSU. 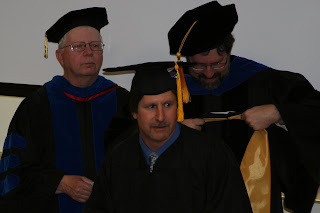 In the moment - many moments - I questioned the purpose of my very existence in ways I had not done since before getting clean. It was not the 24/7 type of gnawing that it was in the past, but those questions persisted. By the time my coursework at LSU was finished and by the time my funding ran out at the end of the 2015 spring semester, and despite the fact that the storm had largely blown over, I had already spent a year not writing my dissertation. I cycled through several "I'm gonna do this!” moments of inspiration, always followed by more and deeper procrastination and... then nothing. Sometime in late 2015 or early 2016 I decided that despite my ability, I did not have the willingness to complete and write what is typically a year or more research project. By that time I was employed as a “lecturer” at my first alma mater, CSUS.

However, I did have enough coursework and I did complete my comprehensive exams (I was a "doctoral candidate"), and that was more than enough to be awarded another MA at LSU. I took it before my early coursework started to "time-out" and moved that last, ultimate academic goal, the Ph.D., off the “back burner” and over to the "almost made it" category. It's not the only thing that lives there among my many failures in life, but that one, more than all the others, comes with a significant level of recognition; it represents much more success than it does failure. I am still very much proud of the work I did, despite not doing it all.

Do I regret missing the big prize? A lot. And I knew I would. That I did see coming, and I accepted it. However, my decision also placed me where I ultimately wanted to be. Although my job title and responsibilities differ in some ways (as does my pay) from tenure and tenure track professors, I am doing what I wanted to do. I love school;  that is something I never thought I’d say when I was young. When I came back as a “non-traditional" student 15 years ago, I used to joke that I wanted to remain in school for the rest of my life. I get to do just that. I teach "Rhetoric and Social Influence," "Argumentation," "Public Speaking" (both lower and upper divisions) and other classes in the qualitative arm of communication studies at CSUS. As such, I am always "in school."

That storm, that train-wreck relationship for which I volunteered, was not solely responsible for derailing my Ph.D. Did it play a role? Certainly, but there were several other factors that also played a role - some foreseeable, some not. And my (ahem) advanced age definitely contributed to a mix of factors that ended in failure... and success. My life today is rich. It is fulfilling. While I would love to have earned the right to put "Dr." in front of my name, the fact is that I did not earn it. What I did earn, however, has made my life a magical experience. I have a quote tattooed on my left forearm from a children’s book called “The Minpins.” It is the last line in the last book ever written by Roald Dahl, published posthumously in 1991: “Those who don’t believe in magic will never find it.” There are all kinds of magic. I found one I can believe in and because I do, I have, indeed, found it.
Posted by Michael K. Althouse at 8:56 AM