Not a Motorcycle Story

This is a motorcycle ride story, but it’s not just about motorcycles. I became profoundly aware of some “life things” during this particular ride. I expound upon them towards the end. It’s worth pondering, even for those who never have and never would ride a motorcycle. It’s not as much about riding as it is about living. 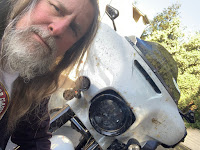 Last weekend I decided to take a break from everything and go on a three-day motorcycle ride in Central California. It was not my first solo multi-day motorcycle excursion, I’ve made several such trips, but most were part of a bigger picture – some destination or other “reason” was usually part of the deal. Once I rode to Southern California for a friend’s wedding and then took several more days traveling through Arizona, New Mexico, Colorado, Utah and Nevada. More than once I’ve used the journey to and from the annual Sturgis Motorcycle Rally as an opportunity to log several thousand solo miles. While I like riding with others (two to four, not a lot of others), it’s not the same as riding by myself. Nothing is more relaxing, more meditative and more energizing than just me, my machine and the open road. 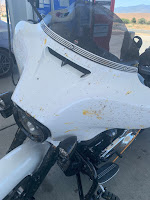 My route last week took me on many roads I’ve ridden before, I knew what to expect - great roads, little traffic and pristine scenery. Although I didn’t have any firm plan as to the route I would take, I did have a list of possibilities that are based on experience. I live near Sacramento and there are numerous ways I can go to get “there.” I chose US-50 up into the Sierras toward Lake Tahoe, CA-89 over the Monitor Pass to US-395 and south from there towards Death Valley. These are roads I am very familiar with and rendered exactly what I expected; it was Nirvana. I spent the night in a motel that would be a sub-one star rating if ratings went that low, but it had a bed and a shower, which is all I really need. From there I took CA-190 into Death Valley, another road I’ve ridden before and, at this time of year, the weather is perfect.

While at the summit getting ready to descend into Death Valley, I had a decision to make. I could have continued through Death Valley National Park or take Panamint Valley Road to Trona-Wildhorse Road into Trona and Ridgecrest. The road condition was a big question mark, but I had the option of turning back and going to Stovepipe Wells and Death Valley Junction, winding my way around to I-15 before attempting to reroute back to roads less traveled. I took the chance. The road condition was not great, but good enough to navigate my 2017 Harley Street Glide Special at a decent clip. And there were sections that easily fit into my “must-ride” category of motorcycle roads. It also took me out to Lake Isabella and CA-178 through the Kern River Canyon, a route that I would have bypassed had I gone around. 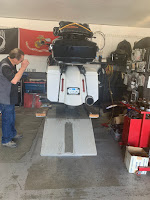 I had a minor mishap on CA-178, a bump in the road took out my kickstand spring. I was able to fix it temporarily, but I was also lucky to find a small shop in Weldon that could fix it for me. I could have made it without the repair, but since I could get it fixed, I did. While I was there, shooting the breeze with the other bikers hanging around, I was informed about just how spectacular the road through the canyon is – and how dangerous it can be. I found it to be spectacular and only as dangerous as any other winding mountain road would be. That was, after all, why I was there. That road flattens out in the Central Valley as is enters Bakersfield. I stopped for gas at the CA-178/I-5 interchange and was content to let my GPS guide me to San Luis Obispo where I would stay for the night. That route put me on I-5 north for more than 20 miles, not a ride I was all that into.

As I was riding, thinking about the I-5 and 20-plus miles of straight, flat, boring riding, I remembered the route options I saw on the map days before. The fastest route was indeed I-5 to CA-46 to US-101, but the more direct route is CA-58 through the Coastal Range right to San Luis Obispo. Google maps indicated that there was construction on that highway, but it was not only a Saturday, but late in the day at that. At the last moment I took the CA-58 offramp, and away I went. Through the valley section, it was not anything to write home about. It had it’s moments, but it was mostly Central Valley farmland. However, when I hit the foothills, the ride took a serendipitous twist.

There was indeed construction going on – they were resurfacing the road. But most of the many miles I traveled on it were already done, and recently. The road condition could not have been any better – it was smooth, fresh and sticky. The section they were still working on was short and construction was already done for the day. No one-way traffic controls (despite the warning signs to the contrary), no personnel and no equipment hampered me in anyway. But the best part of that section of road was that it was virtually abandoned. I saw maybe fewer than 10 other vehicles on the road during the best part of it – for miles and miles. When I arrived in San Luis Obispo, I was walking on air. I rolled the navigational dice all day and I won every time.

As I was unwinding in San Luis Obispo, in a much better motel room, I was contemplating which way I would take to get home. If the journey is really about the journey, the only logical choice would be to ride the world famous Pacific Coast Highway up through Big Sur, Monterey and points north. I’ve done it before, I’ll do it again. It is a ride that never gets old. However, there was a chance of rain in the forecast along the coast and I was not too sure about riding that road in the rain. I’ve ridden in the rain many times, in many places, but I avoid it if possible. However, avoiding it meant riding inland several hundred miles on perfectly mundane roads. I deciding to check again in the morning. When I did, the chance had decreased, but was still there. I rolled the dice, again. 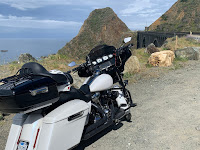 It turned out to be another win, and it was decision I made due to a revelation from the day before. It was what I now call a “motorcycle decision.” (For those who have endured the ride thus far, this is where I get to the “life stuff” I teased at the top). A motorcycle decision is one that best fulfils the purpose of the ride – any ride. While this ride had no destination, it held no utility, it was largely uncharted, the route was always in flux, it did have a purpose. There was a goal, a reason I set out on what turned out to be an almost 1,100 mile circle. That purpose, while difficult to define in certain terms, can be looked at as an extended meditation session. Prior to the ride, I was stressed. I had some internal pressure gnawing at me. I felt not myself. My ride was meant to take me out of the here and now for long enough to get my feet back under me, and it did just that.

That goal could have been derailed by a number of factors – decisions made that were not directly aimed at achieving this goal. For that, I had to know why I was doing what I was doing and how that mechanism works. When I am on a ride, and there could still be utility or other purposes beyond just getting out on two wheels, the destination is not what it is about. Ever. Even when I am going someplace, if I am riding, the way I get there is a factor. That revelation goes for virtually every decision I make in life. It is never just about “there;” it is about how I get there. Sometimes expediency is a factor. If so, an airplane would be a better decision. Sometimes other people are factors. If so, the best way to connect with them is a better decision. Whether it’s work, school, family, recreation, fitness… whatever the destination is, there is a path to it. If all I ever consider is “there,” I could overlook factors concerning what the best way to get there is.

We seemed to be so goal oriented these days. Although there is nothing wrong with goals and focusing on them, if I get so focused on getting there, I'll develop tunnel-vision; I will inevitably miss so much along the way. Last weekend, my goal was to get out of myself by doing the kind of riding I enjoy most. That riding does not involve traffic, straight, flat roads or a bunch of people. The decisions I made, unwittingly at first (CA-58) and then very purposefully (the decision to take PCH after all) made it a truly magical experience. If I take the time to consider things I wouldn’t in my effort to "arrive," I won’t have to just endure the journey. I can truly enjoy it.
Posted by Michael K. Althouse at 2:38 PM