I lead a fairly peaceful life. Despite the career and academic pressures that are ever-present, more often than not I keep everything in perspective and on an even keel. Most of what goes on is foreseeable; for the most part there are not too many surprises. Those afore mentioned pressures are expected and I usually see them coming well in advance. There is nothing much to get flustered about. But the habit and/or instinct to spring into action when emergencies present themselves does not, apparently, atrophy. There is, however, a difference between reacting and responding.

There was once a time when the unexpected occurred so frequently that it was almost expected. Most often I met these "emergencies" with a quick and poorly planned reaction - or none at all. Instant mitigation or ignorance was the only end - the means had no limit. And although that sort of reaction can produce results, the side effects can create problems of their own, problems that were unforeseen not because they were unforeseeable, but because I didn’t take the time to look. Reaction. Mitigation. Make it all go away right now, damn the consequences.

Life-threatening emergencies require quick action and certain risks must be assumed. Most emergencies are not of that variety, but it seemed my reaction was always some sort of boilerplate without regard to the magnitude of the situation. This appears not to be the case anymore; I can even say that when a situation is life threatening, I can meet it with a reasoned and measured response. My son and I had a life-threatening situation materialize late last night. His new chocolate lab puppy, Bella, got very sick very fast and we needed to make some decisions. After gathering as much information as we could at home, we decided that an emergency visit to a veterinarian was necessary. 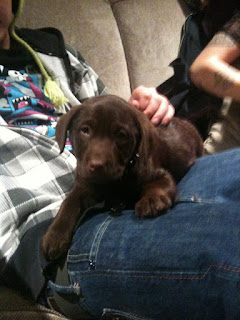 Not a human life? She is part of our family and although she is my son’s dog, I love with her as I do a great many people I care about. And as I would with those people, I gave everything I had to be sure Bella would make it through the night - and my son got to participate in this calm, measured response to a very real emergency. We gathered everything we needed, scooped Bella up and drove – at the speed limit – to the pet hospital. The closest emergency vet is about 20 minutes from our home – I suppose I could have made it in about half that time, but that could have very easily caused more problems. It turns out that our response likely saved Bella’s life.

We have a very sick puppy. She was extremely dehydrated, vomiting and would have had diarrhea if there were enough fluids in her system to produce it. Although she has had her shots, she still managed to contract canine parvovirus – almost always fatal in puppies if left untreated. She was tested, prodded and poked, given fluids, medications and we were sent home with a battery of instructions, injections and other medicine to get her well. Bella saw her regular vet this morning and her prognosis is good. She is feeling better today, but Bella is still not out of the woods. And now that she is hydrated she can and does produce copious amounts of… it’s a mess, an unexpected mess, but one we have responded to with love and reason.

The problem has been mitigated, but it is not yet over. There is nothing instant about solving this issue. We have a pensive two to four days ahead of us, but right now we are feeling a great deal of relief and we both know that the relief is due in no small part to our response. We are not cleaning up the mess of a shortsighted reaction, but we are cleaning up the mess of a sick puppy - and it looks like she’s going to make it. Somewhere between no reaction and over reaction lies what proved to me to be so elusive for so long – a response.

UPDATE:
Bella appears to be making a swift recovery. Her symptoms have all but disappeared and we are weening her back to solid food. Other than tiring faster than normal, she is no longer a sick puppy.

I am sure that that response will help mitigate the problen and not panicking will be sensed by Elli, so she'll feel better sooner than expected!
;)

Your responce saved the Pup and no panic helped her as much as it helped you and your Son !
My son has a 18 month old yellow lab that is my Grand Dog... :)

Good to hear she's getting better. I totally understand your feelings for her. I too like my dog more than a lot of people I know.